"Dveri" is the old Slovenian word for door. Železne Dveri is also the name of the exceptional viticulture location close to Jeruzalem where Dveri–Pax maintains its vineyards. "Pax" is Latin for “peace” and also “inscribed”. Dveri-Pax makes refreshing, drinkable and typical wines from estate-grown fruit. 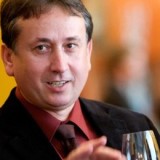 Danilo Flakus was born in 1966 in Zgornja Kungota, Slovenia. He studied at the central agricultural school in Maribor, after which he started to work as a vineyard manager in Vinag acquiring vast knowledge of the vineyards in the area. In 1996 he joined Dveri-Pax as first employee of the company acting as a consultant to the owners. His other roles at that time were also vineyard manager and winemaking assistant. In 2006 Danilo Flakus became the chief oenologist and General manager of the Dveri-Pax winery.