Supplied to the Bavarian royal court in the 19th and early 20th centuries and sung about in poetry, the Neustadter Vogelsang fell into oblivion due to developer speculation. The magnificent nature and resulting protected status put a spanner in the works, and so in 2017, after a few years of conventional cultivation, the vineyard came into our biodynamic hands. Now we have reawakened the spirits.
This is certainly one of the most exciting projects for many years in Pfalz and beyond. After several years of bottling the wine as a VDP.Ortswein under the name Neustadt V., the time has come with the 2020 vintage to bottle the first Vogelsang GG. This signals the renaissance of a great vineyard with Neustadter Vogelsang on the label for the first time in 50 years.
The soil consists of shell limestone formed more than 200 million years ago, which came to the surface during the collapse of the Upper Rhine Graben and is unique in this form in the Mittelhaardt region. The vineyard slopes quite steeply to the south with a gradient of up to 50%. Due to its location, at the exit of the Neustadt valley and at an altitude of up to 260m, there are large temperature differences between day and night, which create a great deal of tension in the wine.
The cooler high altitude and the stony shell limestone give the wine a lot of freshness, elegance and powerful minerality. In addition to the classic aromas of yellow fruits, it shows a lot of dark spice and herbal saltiness. Of course it already gives great pleasure with its youthful aromas but the wine only reveals its true quality after many years.
The harvest of the Neustadter Vogelsang VDP.Grosse Lage takes place in two rounds, whereby the grapes are harvested under strict selection of only fully ripe healthy berries at the optimal time in each case. The yields here are only 40hl/ha, so that the grapes achieve fullness of flavour.
The grapes are transported to the press house in small crates, crushed and then gently and slowly pressed after a relatively short maceration period of 1-2 hours. The must is only slightly pre-clarified by settling overnight and then fermented spontaneously with the vineyard's own yeasts at a fairly warm temperature. Unfined and untreated, the wine matures for a long time on the lees and fine yeast in large, classic wooden barrels until bottling. – Steffen & Sophie Christmann

Very bright and uplifting nose with delicate dried-flower aromas. Lots of depth and structure, but also very polished. In spite of the power and mineral backbone, it’s quite sleek at the very long and complete finish. The first vintage of this GG! From biodynamically grown grapes with Respekt certification. 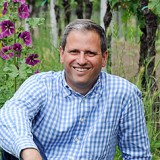