Bonhomme's Viré-Clessé Les Hauts des Ménards comes from an old parcel planted 85 years ago. The shallow clay-limestone of this fairly steep slope has a large proportion of red clay. Fermentation and maturation take place in oak casks over 24 months before bottling. The wine is naturally rich with a beautiful structure balanced by a refreshing minerality which also contributes to its satisfying length.

The wines of André Bonhomme were a happy discovery during our scouting expedition for affordable burgundy at ProWein this year. The estate was founded by André and wife Gisèle in 1956, making it the first domaine of what is now the Viré-Clessé appellation. Back then they just had four hectares of vines which they’d inherited from André’s father Joseph, who grew grapes for the cooperative in the village of Viré. The wines have always been bottled at the domaine, which now extends to 12 hectares of vineyards. These have been organically farmed since 2001 and certified from vintage 2014. 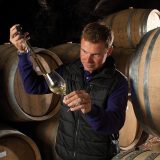 Aurélien Palthey, the grandson of André Bonhomme, has taken charge of the winemaking since 2008, following formal and practical training in Alsace and Meursault. He’s supported by his mother Jacqueline (daughter of André), father Eric and brother Johan. Their focus is firmly on white wines (99% of production, all of it Chardonnay), built on minerality and firm acidity.
The vines have an average age of 55 years and the fruit is picked by hand. The whole bunches are airbag-pressed before the musts undergo long fermentations with natural yeasts. Both stainless steel and oak barrels are used in the winemaking process, with the duration of élevage also varying according to the specific cuvée. Bâtonnage is usually avoided in order to retain freshness and acidity.