The fruit for this village-designated Kabinett comes from the Apotheke grand cru, Trittenheim’s finest individual vineyard site. It lies on the right bank of the Mosel, opposite the village of Trittenheim. ‘Apotheke’ literally means ‘pharmacy’ but the vineyard’s name doesn’t refer to the medicinal properties of its wines. It in fact derives from a foundation established by the “Abtsberg” Abbey of Trier. With its extreme slope of up to 78%, Apotheke ranks among the top sites on the Mosel. The southwest-facing hillside benefits from direct sunlight well into late evening, a lengthy time during which the slate soils store heat, which extends the ripening period. Weathered slate slopes with subterranean water veins ensure an optimal supply of nutrients and allow the vines to develop deep roots. The grapes yield wines with great aging potential and complex minerality. In their youth, the wines show finesse; as they mature, they display rich fruitiness reminiscent of apricot and peach.

The 2017 Trittenheimer Riesling Kabinett delivers a fascinatingly clear, fresh, pure and spicy-mineral as well as herbal bouquet of crushed slate and white fruits. Lush and piquant on the intense, precise, spicy-piquant and just gorgeous palate, this is a highly stimulating and just sexy Kabinett with white peach and apricot flavors on the aromatic finish. A fabulous Kabinett with grip and tension. 8% alcohol.

That push and pull you get from off-dry Mosel is here in spades. You’ve got your talc perfume, sweet green apple and fresh apricot going on, along with spice and ‘mineral’, and some Lucky Cow cheese triangle interest. I often find a ‘Disprin’ character in some Mosel wines, and here it is, which is a positive for me, Electric acidity mingles with sweet fruit, fine chalky grip, and a sweet and gently savoury finish of excellent length. Balance and precision. They’ve done very well in 2017. Hard not to gulp it down.

Laced with aromas of white and blue flowers, pear, apple and peach, this intense, pristine young Kabinett from the Mosel delivers a finely balanced sweetness plus a hint of honeycomb. At a mere 8% alcohol, it’s long and luscious, with pristine lime and lemon, pear and apple flavour underpinned by a fine dustiness. Punctuated by a racy, almost nervy acidity, it’s artfully balanced and persistent.

Weingut Ansgar Clüsserath in Trittenheim on the Mosel has been owned and operated by the family since its founding in 1670. But once again, it came to us through a CellarHand 'family' connection. In charge of winemaking these days is Ansgar Clüsserath’s daughter Eva, who happens to be married to 2014 Gault Millau Winemaker of the Year, Philipp Wittmann. Like Rheinhessen superstar Wittmann, Eva is a member of Germany’s new generation of winegrowers committed to traditional, ecologically sound viticultural practices as well as forward-looking methods.
Some 97% of the vineyards are planted to Riesling. The Clüsseraths have ramped up their emphasis on canopy management for fruit health and ripeness, and harvest all grapes by hand in several stages. Between crushing and pressing, the grapes are left on skins for up to 48 hours. The cool, damp cellar is the ideal setting for its 50-year-old Füder, the traditional round-bellied, 1000-litre casks in which the must undergoes a slow, natural fermentation. Afterwards the wines are left on lees, receiving no treatment except a single filtration prior to bottling. 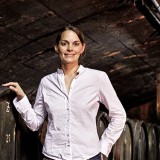