Vintage 2013 produced good crops and ripened late in April producing deeply flavoured fruit with fine tannins. Sourced entirely from our Dead Morris vineyard, all fruit was handpicked and 40% of the blend received a long maceration on skins.
Maturation was for 20 months in 79% new fine-grained chateau barriques from Taransaud and Sylvain cooperages, before light egg fining and bottling in December 2014 under procork.
Deep rich red in colour, the nose is perfumed with perfectly ripened dark blackberry, liquorice and cassis fruit. The palate is medium bodied and fine, with fleshy cassis and blackberry fruit. The finish is long and textured with fine grainy tannins. This wine is complex and tightly structured, made to cellar with confidence and decant before drinking. pH 3.50 g/l; TA 6.9 g/l; Alc 14.5%;

Hand-picked from a single vineyard; 40% long maceration on skins, matured for 20 months in new deluxe French chateau barriques (60% new). Deeply coloured, it is the quintessence of Coonawarra cabernet, with an immensely long palate, fruit, oak and tannins all contributing. Sometimes the oak on The Tally can seem too obvious in blind tastings with other top-flight cabernets, but it's hard to see that happening here. The drink-to date has been shortened by the decision to use ProCork. 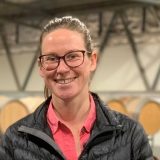