Huber’s holdings in the grand cru Bienenberg vineyard were planted in the 50s and 60s with primarily German clones. They are the oldest on the estate. Of the approximately 130-hectare Bienenberg Vineyard, Huber owns 15 hectares. Of this, about 10.45 ha is classified Grosses Gewächs. The soil is yellow-reddish shell limestone. The aspect is south-east to south-west. Part of the vineyard is on a 15% slope (so passable with vineyard equipment) and part is on small, steeply ascending terraces (up to 60% gradient). The average vine age is between two and 53 years and yields are around 30 hl/ha. The Pinot Noir is marked by red fruits with hints of violets. Equipped with power and elegance, it takes time to play out its potential.

From the stunning ripeness on the nose (the sweetest cherries!), through the graceful entry, through the generous and silky mid-palate and again through the powerful, chalky finish, which has staggering vitality, this is a great Pinot Noir that's just beginning to reveal its riches. Better from 2019 and on the strength of earlier vintages, this has maybe 20 years' ageing potential. 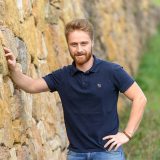