VINTAGE 2017
We experienced a mild winter, and after an initially dry spring, there were periods of rain. Early budburst was followed by cooler temperatures aside from brief heat spikes in November. Windy conditions started in November and December was also relatively cool and flowering a little patchy. Mild conditions prevailed through to mid-February, with rain at times and nights often dipping below 10˚C. Wind continued to be a challenge and vine canopies were quite low in vigour. By late February the temperatures lifted and veraison had gone well. Crops were low due to the season, however ripening progressed well, with harvest commencing in late March.

VINEYARDS
Burn Cottage is a natural northeast-facing amphitheatre at the south end of the Pisa Range in the Cromwell Basin. The site is to the West of Lake Dunstan, and just south of the 45th Parallel. Elevation 240-310 metres. The soils are derivatives of broken down schist and granite, old river beds and outwash of ancient glaciers. They are classified as free-draining sandy loams, with the steeper slopes having more rock and gravel, and lower elevations slightly heavier soils. Vine age 12-14 years. The vineyard and property are managed according to biodynamic principles.
Northburn has a gentle northwest to southeast slope at an elevation of 200-257 metres. Soils are a mix of glacial fans and washes previously used for alluvial gold: stony loams, river stones, clays and schist. Vine age 13-17 years. Burn Cottage manages its rows according to organic principles.
Mark II Vineyard is located in the foothills of the Pisa range north of Lowburn, around 12km from Cromwell. It’s set on north- and east-facing slopes at an elevation of 250-350 metres. The blocks are differentiated by soil and aspect, and originate from tertiary glacial deposits: fine clays, schist, quartz, manganite and free draining gravel loams. Vine age 16 years; sustainably farmed.

TASTING
Very expressive with bright red and black fruit notes, spice, tea and earth tones. There is a real elegance to the palate, which is savoury, supple and complex, with fine tannins extending throughout. Lovely bright focus and length. We expect this wine to cellar for up to 8 years. - Claire Mulholland, Burn Cottage

A lot of vibrant red and dark cherries here with supple, silky tannins, delivering a fresh and sleek feel to the palate. Approachable and also capable of improving further in bottle. Drink or hold.

Chicago wine importer Marquis Savage fell in love with Central Otago on what was meant to be a quick tour of the region. Falling in love meant purchasing 24 hectares in the Cromwell basin, which were subsequently planted with clones specific to soil type and in accordance with biodynamic principles. Enlisted to help in this task was Ted Lemon of Littorai, who brought with him more than three decades of practical knowledge of terroir winegrowing based on experience in Burgundy, California and Oregon.Born-and-bred Central Otago talent Claire Mullholland, formerly of Martinborough Vineyards and Amisfield, takes charge of the winemaking, realising the bright, lively, profound potential of these vineyards year in, year out.
Biodynamic producer 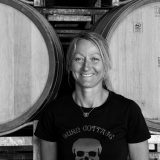