70% Pinot Noir and 30% Chardonnay from Verzenay, Grand Cru. Based on the 2013 harvest, with 10% reserve wines from 2012. Tirage 2014 and aged on the lees for a period two times greater than appellation requirements. Disgorgement: 2018-2019 (see back label). Dosage: 1.6g/L.
The wine offers intriguing complexity, with aromas of dried fruits, enhanced by subtle toasty aromas and roasted hazelnut. Rich and harmonious on the palate. Beautiful structure of Pinot Noir is exquisitely intertwined with tension and energy of Chardonnay. Delicate and persistent on the finish.

A new kid on the block, from Grand Cru vineyards in Verzenay, the base wine of 70% Pinot Noir and 30% Chardonnay , on tirage 2/4/14, disgorged 17/5/19. Lives up to expectations with a spicy brioche bouquet, the palate elegant and well balanced, with a particularly long finish and fresh aftertaste thanks to its micro dosage.

There was an immediate note of bitter almond, followed by spices, stone fruits, grilled nuts, and a minerally background. Hints of marmalade and glacé lemon. Crisp acidity. This was intense, balanced, and finished with a lovely touch of grapefruit and biscuit. Loved it.

There has been a lot of precision in the making of this wine that shows through in the glass. A blend of 70% Pinot Noir and 30% Chardonnay, sourced from the Grand Cru vineyards of Verzenay, mostly in 2013 with a little reserve wine and during tirage, only 1.6g/l dosage. This Champagne is light and delicate with a huge potential for ageing.
The nose is tight and fresh with crisp green apples, fresh lemons, danish pastry and crushed almonds which all appear again on the palate. They are joined by notes of brioche, fresh button mushrooms, ripe apricots, grissini, quice and white blossom flowers. The bubbles are smooth and creamy with that taut and racy acidity driving the flavours into a long, lingering finish.
There is a falsehood that Non-Vintage Champagne isn’t as complex or cared for, however, JM Labruyère are allowing the fruit, the location and precise winemaking techniques to show that with confidence and know-how handed down through the generations, fine Champagne can be made, vintage declared or not. 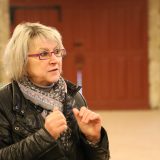