As the third generation of the Barry winemaking family, we now hold the keys to this boutique winery and its dry-grown vines planted back in 1971. Riesling is the Clare Valley's signature variety and this was our eighth vintage from clos Clare's Riesling patch, adjoining the historic 'Florita' vineyard in Watervale.
The nose displays aromas of Granny Smith apples, lemon thyme and mandarin. The palate has finesse, generosity and structure, with flavours of finger lime, blood orange and star fruit. - Sam Barry

One small, five-acre corner of a Riesling vineyard, in Watervale, was sectioned off 30 years ago to help the Barry family fund the purchase of some truly hallowed ground. The Florita was the greater vineyard and the tiny corner was named clos Clare by its new owner, artist and the designer of its eye-catching label, Ian Sanders. In 2007, the Barrys bought this little vineyard back but wisely kept the brands separate. Today, this incomparable wine is made by Sam Barry (Jim Barry’s grandson) and it is all about excitement – from the tender yet racy nose to the pellucid, glassy palate and beyond to a breakneck, high-drama finish. I have followed this wine for just short of twenty years and it has never failed to move me. The 2015 shows rare Riesling sophistication and no matter when or where you drink this wine you will recognise its unique signature scent and peerless poise. 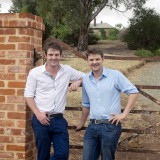