69% Cabernet Franc, 14% Merlot, 11% Cabernet Sauvignon, 6% Malbec. All four varieties used in the blend were dry grown on mature vines in the Isolation Ridge Vineyard at Frankland Estate. Each variety was fermented separately, as slowly as possible at temperatures not exceeding 27°C. Open fermentation tanks facilitated working the cap with gentle plunging, taking care to minimise tannin extraction. After fermentation, an extended maceration period allowed desired flavour and tannin resolution. The component wines were blended on completion of the malolactic fermentation and then aged in 500-litre French oak puncheons for 15 months.

A blend of Cabernet Franc, Merlot, Cabernet Sauvignon and Malbec, each variety open-fermented separately, matured for 15 months in French oak. As rich as it is complex and vice versa. A distinguished wine.

Deep red colour with a good tint of purple, and a lifted fragrance of raspberry and red cherry, cassis, cedar and blueberry hints, the palate full-bodied and firm, densely packed with flavour and tannins. Concentrated, essency, dense and powerful, it lingers very long on the farewell. Tightly packed. Lots of detail. A most impressive red, Cabernet Franc clearly leading the charge.

69% Cabernet Franc, 14% Merlot, 11% Cabernet Sauvignon, 6% Malbec 100% Frankland River. Grown organically. Beautiful wine. Elegant, well-flavoured and long. Complex in an effortless way. Florals, dark berries, peppercorns and sweet cedar. An array of spices. Ultra-fine tannin melted straight into the flavour. There’s a whisper of truffle/corn here but, and I don’t say this too often, it works in context. A gentle creaminess to the texture is the icing. This is pretty terrific. Gold standard. 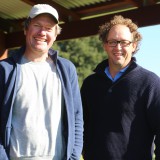