Frédéric Mabileau Orgasmic Pétillant Naturel - or Pét Nath, more correctly since it's named in honour of Nathalie Mabileau - is 100% Chenin Blanc from a 0.53-hectare plot of sand and gravel over a layer of white clay. The 13-year-old, organic-certified, single guyot-trellised vines are harvested by hand, with a yield of 55hl/ha. The handpicked bunches are slowly pressed and the must fermented in stainless steel with indigenous yeasts. This is a soft and pure pet-nat with extremely fine mousse and aromas of peach, apple and pear. 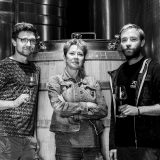