Dijon clones 95 and 76 with a tiny bit of Mendoza and P58.1/3 new oak, 1/3 one-year-old and 1/3 two-year-old. Full malolactic conversion. Lime leaf and nectarine with nutmeg oak gloss. Honey yoghurt suggestion from MLF. Smells seductive. Tight and cool in the mouth - that same fruit spectrum, and with floral perfume and energy. Has a compact, fairly dense core, and great drive. Long and with crackling zestiness. - Ed Merrison, CellarHand

A fine chardonnay that effortlessly melds a mineralic discipline with a slippery generosity. Stone fruits a go go, orange blossom and tangerine ply a multitude of accents across a bone of transparent acidity. Ginger spice, too, crystalline and nicely offset by a creamed core of leesy nourishment imparting cashew, nougat and oatmeal notes. All well embedded. Good pulse and fine length.

Attractive peaches and grilled lemons with toasty complexity, following on the palate with layers of very fresh, fine and pure peaches. Drink now. 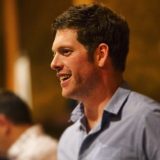