Dominik Sona aims for a light-bodied, traditional Pfalz Spätburgunder here - ripe but with modest alcohol and good acidity. The fruit is destemmed and then wild fermented in stainless steel. After 3-5 weeks they drain the tank and press the skins, then blend it into Doppelstück and Halbstück barrels (pretty much no new wood). Natural malolactic conversion. After 20-26 months the wine is racked, given a light filtration and bottled, with free SO2 down at 40ppm.
The wine has a woodsy, smoky nose with forest berries. Open-knit and fleshy on the palate, which is pleasingly even with enlivening acidity through the finish. The tannins frame it well – with a certain rusticity but no roughness to detract from a bright and natural-feeling, ripe and moreish Pinot Noir. - Ed Merrison, CellarHand

Koehler-Ruprecht is one of the oldest, most distinctive wineries in the Pfalz region. It first came to our attention many years ago when the late, great Berhnard Breuer introduced me to Koehler-Ruprecht legend Bernd Philippi with whom Bernhard had partnership projects in Spain and South Africa at the time. Bernd later came to Australia for one of the Frankland Estate Riesling tastings to present aged examples of their most famous single-vineyard wine, the Kallstadter Saumagen. Years went by and it wasn’t until 2012 that I visited the winery for the first time, which is now owned by the Sauvage family of Burn Cottage fame. The time had arrived to bring these in, albeit in the tiny quantities in which they are available. Made using only the finest hand-selected grapes, which undergo spontaneous fermentation in very old wooden barrels, these amazingly long-living Rieslings buck the trend when it comes to what we have more recently come to understand as dry German Riesling. Variety is the spice of life eh?
Biodynamic producer 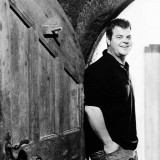 Dominik was born and bred in the Pfalz region. His grandfather cultivated vines there and his parents, a nursery teacher and civil engineer, kept them on. Dominik always suspected that his commitment to wine would run deeper, acknowledging from a very early age that a desk job wasn’t for him. Towards the end of his high-school studies he decided to dedicate his working life to wine.
In 2010, at just 29 years of age, he was working at a winery in California when he heard that the Koehler-Ruprecht estate was changing hands. He had a chat with new owners, the Sauvage family, who ended up asking him to run the estate. He said yes, and got to work immediately following that vintage in the US.
Since then, Sona has been working alongside the great Bernd Philippi, learning the methods established by the latter’s grandfather 100 years ago. Continuing these traditions following Philippi’s departure is of the essence, though Sona and the team are looking to add new lines of wine in the typical Koehler-Ruprecht style. Dominik enjoys the tranquillity of Kallstadt and likes to swim and cycle in his spare time. But he admits he doesn’t find a lot of that – at this stage in his life, he’s too enamoured of all aspects of winegrowing to take much time off.