Cool, maritime climate with an annual rainfall 800mm+, the deep red clay loam over ancient volcanic loam of the Leongatha region, are so distinct from the high density planting, 6000+ vine/hectare vineyard.
A great season in Gippsland. The wild ferment had no trouble taking off, with 30% whole bunch, extended fermentation, with approx. 3 weeks on skins. The oak regime was 30% new oak for 15 months, with racking at the completion of wild malolactic fermentation and just before bottling. No filtration of the wine was required.
With fine berry flavours, complemented by whole bunch  characters and Burgundian oak. A very fresh and lively palate of full bodied Gippsland Pinot Noir  minerality and well structured tannins.

Wild yeast, 30% whole bunches, 3 weeks on skins, 30% new oak, bottled unfiltered. It's a dark, brooding pinot noir but most of all it's a seductive one. Dark cherry, sap, wood spice, a coating of smoky, cedary oak. From the first sip to the last, it has you hooked.

Wild yeast, three weeks on skins, 30% whole bunches, 30% new oak, bottled without filtration. From 2013 there’s both this Gippsland Pinot Noir and a Mornington Peninsula Pinot Noir.
The 2012 was terrific; so too is this 2013. It’s a darker, more brooding number, seductive with black cherry, woodspice, sap and undergrowth, made slinkier and softer by polished, smoky, cedary oak. It’s one of those wines: it drags you into its dark, complex world from the first sip. In short, its quality is obvious.

As a member of one of the great winemaking families of present-day Australian wine, Philippa had an  appreciation for fine wine from an early age. The story of her own label, which features single-vineyard Pinot Noir from Gippsland and Mornington Peninsula, began with her falling in love in Gippsland, which in turn reignited her passion for winemaking. Philippa kicked off her eponymous, winemaking venture with what Max Allen called "a cracking 2012 Gippsland Pinot Noir". "As debut wines go, this takes the cake. It’s a stunner," wrote fellow wine writer Campbell Mattinson. This same wine critic followed up that review a year later with this: "The 2012 was terrific; so too is this 2013. It’s one of those wines," Mattinson continued, "(that) drags you into its dark, complex world from the first sip. In short, its quality is obvious." 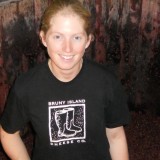 In 2003, Philippa Farr immersed herself in vintage life at  Brokenwood. She returned to the great Hunter Valley winery after the first year of a Bachelor of Wine Science, working full time through vintages 2004 and  2005 while completing her studies part time.
Over the years she’s chalked up further vintages at Bellvale, Bouzeron, Domaine Dujac, By Farr and  Purple Hen. Then, four years after settling down in Gippsland, she seized the opportunity to make her first Gippsland Pinot Noir. She’s never looked back, and nor have those who've had the pleasure of tasting another set of exceptional Farr Pinots.