1.57Ha of Pinot Noir vines in Baubigny (Sous La Velle) and Orches (Les Chaignots). The average age of the vines is 25 years and the slope features brown marl on well-draining limestone. Five day cold soak followed by fermentation in stainless-steel vats with pumpovers and pigeage. Settled over 10 days before being run to barrel (20% new) for 18 months' maturation. Bottled by gravity, unfined and unfiltered. 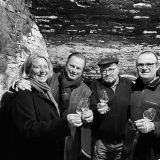