2021 was mostly joyous but not without it’s challenges. Good Winter rain led to strong growth with good cover in the mid row and under vine well into summer. There was nervous expectation after two low-yielding years and muted convversations about the potential for a good year right up until harvest. No disease pressure, good canopies and plentiful bunches led to a long ripening season. Some varieties tested patience and drew out vintage well into May. The greatest challenge was having enough hours
in the day and people to help with harvesting the plentiful and perfectly ripe fruit.
The fruit for Fi Fi Fiano was harvested from a neighbour's well-established block on 20th February. It was settled as juice for 10 days, 50% fermented to dryness in stainless steel and 50% in third use oak. Both parcels sent separately to large oak for 8 weeks' maturation. The wine was blended back together prior to bottling. Bottled early July 2021.
The wine shows exotic tropical fruit: custard apple and guava, a summer ocean, brown lime, elderflower, and stone fruits. That’s before you take a sip! Then it’s more of the same on the palate with a supporting chorus of marzipan and loquat. Composed, silky and medium bodied. The flavours and textures form a raucous concert of complexity. It tastes like a life lived in sight of the sea. - Stephen Pannell 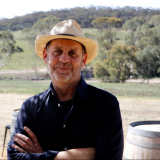