The fruit was handpicked on 4th April, then carefully sorted and destemmed with 100% whole berries going into small open fermenters. Natural fermentation occurred with daily hand plunging to extract fine tannins and flavour. After two weeks on skins the wine was pressed then racked into second use French hogsheads and puncheons where it rested and grew before being blended and filtered before bottling.
The aromatics are seductive and engaging. Floral violets and rose petal waft from the glass, bolstered by blueberry and cherry fruits. Further complexities reveal themselves, such as cardamom, cassis and sarsaparilla. Mineral aspects including gunpowder and graphite provide intrigue. Cherry sap and blueberry fruit fall immediately onto the palate. Complex notes of game meats, graphite and some white pepper spice chime in. A focused and mineral core has drive, vibrancy and poise. Fine and lacey tannins frame the complex cardamom spice and subtle fruits. – Al Timms, Shadowfax

Such a solid performer. It's wonderfully fragrant; all florals, exotic spices, cherries and cola. Unencumbered by new oak flavour (aged in used French hogsheads and puncheons), it's all about the purity of fruit and drive across a fuller-bodied palate. It's laced with velvety tannins and the finish is long as it is fresh.

Forest berries, particularly fresh picked blackberries, briar and rose perfume, mint and spice. It’s lively, a sappy and perky feel, the graphite tannin, undergrowth, almond, and a crisp cranberry finish of precision and length all contribute to its sense of latent potential. It’s a serious, and very very good wine.

Deepish, bright red/purple colour. Dark cherry to plum aromas, some spicy but subtle whole-bunch suggestions, the wine rich and fleshy, deep-fruited and supple, bright and lively, with refreshing acidity in harmony with the other components. There is concentration, power and length here. Very good.

Shadowfax has taken tremendous strides in recent times, with the team refining the range and proving their prowess with Chardonnay and Pinot Noir. Their single-vineyard Chardonnays have taken out Best Chardonnay at the Macedon Ranges Wine Exhibition no fewer than five times. Especially noteworthy have been the Little Hampton Vineyard in Macedon's high-altitude plantings of Pinot Gris, Chardonnay and Pinot Noir, in the chilliest region of Australia’s mainland. These are the vibrant future of Australia’s cool-climate wine scene. The counterpoint to this is the dynamic Minnow project, based around the Werribee vineyard’s southern French varieties. The name is both a reflection of the grapes’ underdog status and a clever play on “Minervois”, a southern French appellation where these kinds of blends are common. It's the source of bright, spicy, textured rosé and reds, with the micro-make Mondeuse immediately becoming a delicious cult hit. With long-serving vineyard manager and assistant winemaker Alister Timms taking the helm in October 2017, these are hugely exciting times for Shadowfax. 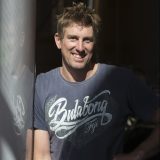