The first rosé produced at Yeringberg is a blend of almost equal parts Cabernet Sauvignon and Shiraz, with the former slightly dominant. It was harvested over three picks spanning more than three weeks, with Shiraz coming in first followed by the two Cabernet picks. The fruit comes from the 20-year-old block that yields the estate Shiraz, combined with the 1999-planted vines that produce Yeringberg’s varietal Cabernet Sauvignon. The Shiraz was whole bunch pressed, tank fermented and run to old barrel, where it spent six months. The Cabernet was crushed and gently pressed before fermentation in stainless steel, then racked when dry to old barrel. The wine was conceived more as a pink red wine than a rose-tinged white; it relies on phenolics for structure rather than being an acid-driven, just-done rosé. It's dry and fresh with fullish fruit aroma and flavour, and leans towards texture and savouriness.

Pale salmon-pink, almost coppery colour. Savoury autumnal aromas, dried leaves and dried flower petals. Soft and round on the tongue, with richness and abundant flavour, as well as delicacy. Slight grip at the close helps deliver a dry follow-through. An excellent rosé. 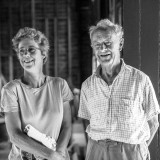