Events / A Carnival Of Vinous Colour

Chalmers Project is a new initiative from Australia’s undisputed champions of wine diversity.
Kim and Tennille Chalmers combine vineyard and winery experimentation with some of the most exciting Mediterranean grapes thriving on the family’s Heathcote and Mildura properties.
They’ve variously played with soil type, altitude, picking dates, skin contact, whole-bunch ferments and more across Moscato Giallo, Fiano, Greco, Negroamaro, Aglianico and Nero d’Avola.
Please come and join Kim & Tennille to explore the personality and vitality – and secure your parcel – of these eminently drinkable micro-batch wines.

2015 Project Chalmers Dry Moscato Giallo
A dry textural white made by open ferment on skins for nine days, pumped over regularly. Pressed off skins at about 2 Baumé and finished in stainless steel. The wine is not filtered and has been bottled in two halves: one fined and one unfined.

2015 Project Chalmers Fiano
Made simply in a stainless steel barrel with fruit from Chalmers’ Mildura vineyard. An example of the style and finesse possible with Fiano in sandy soil and warmer climates.

2015 Project Chalmers Greco
100% Heathcote fruit, crushed and left on skins for three days before pressing. Long, slow ferment in anaerobic conditions. Textural and quirky, with body and plenty of natural acid, too.

2015 Project Chalmers Negroamaro
Pale in colour and medium-bodied. A fresh but vibrant example of one of the Chalmers’ favourite southern Italian red varieties from their Heathcote vineyard. Open ferment, into old barrel. Lunchtime red.

2015 Project Chalmers Aglianico
From the Chalmers family’s prized top block at Heathcote. About 200kg of the most perfect bunches were sealed into 100L drums for nine weeks, after which the wine was pressed, amalgamated and resealed for a further seven months. Bottled in magnums in January 2016.

After returning from a vintage in Occhipinti in Sicily, Tennille Chalmers was keen to explore in more detail the character of the family’s Nero d’Avola plantings. She made four wines following the same method to showcase the effects of terroir and picking date, in order to show the intricacies of this exciting variety. 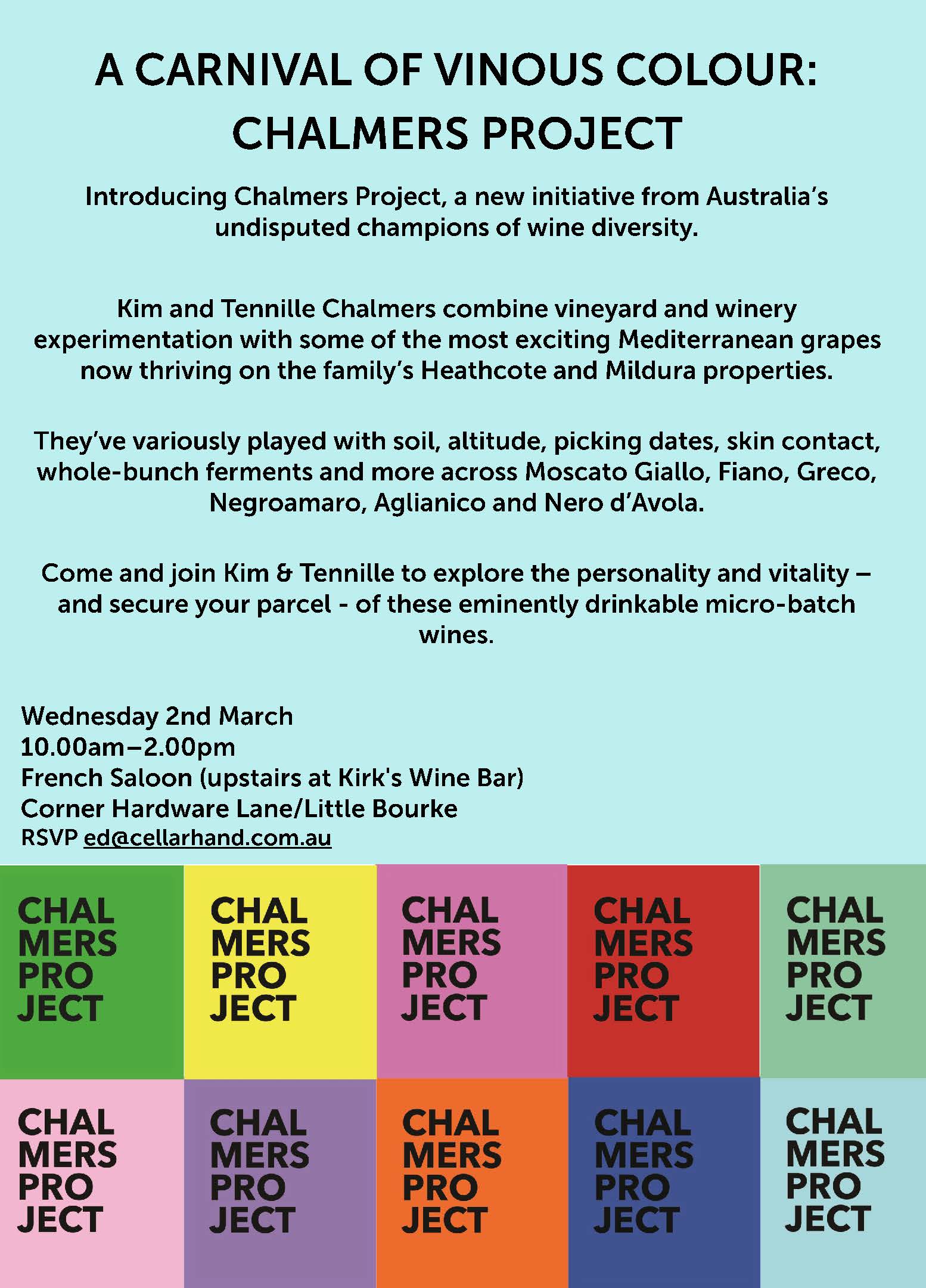