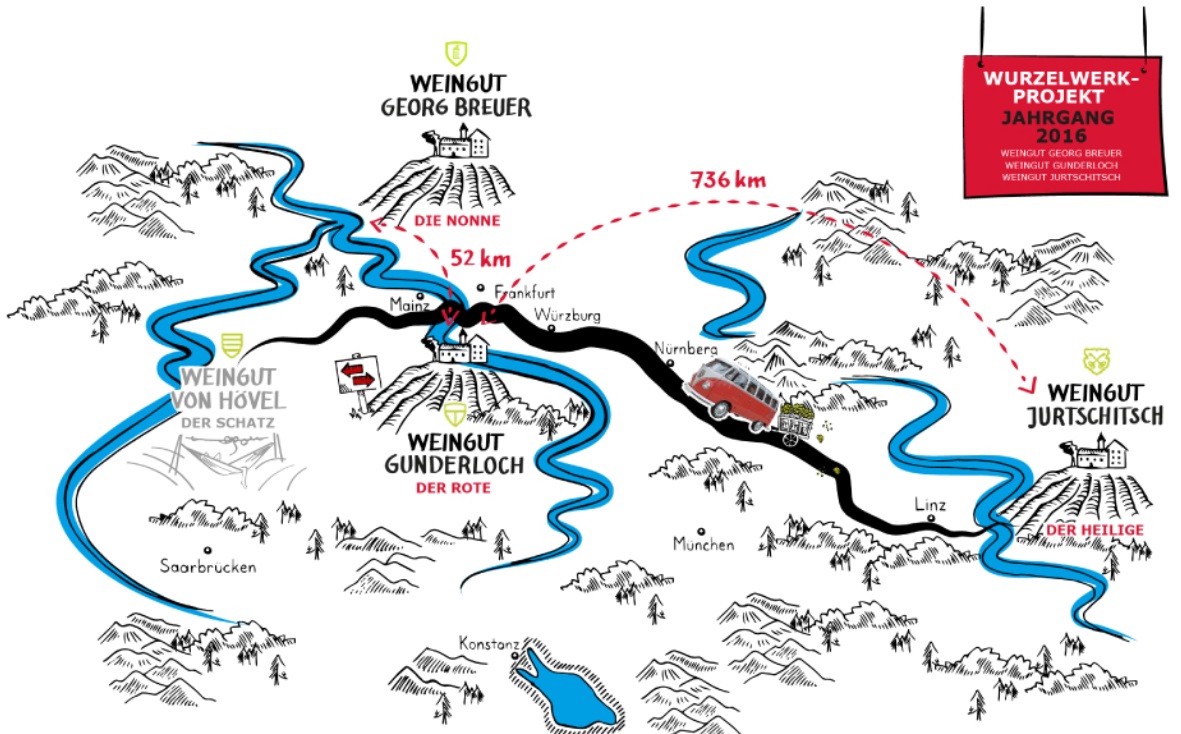 This is a three-way, border-hopping juice-swap experiment through which the participating producers pick apart their soil, their home and their beloved Riesling grape in an attempt  to better understand their vineyards – or as they put it, “to hear the quiet voice of terroir”. Wurzelwerk & Winzers Beitrag is the brainchild of Johannes Hasselbach of Gunderloch and his sister Stefanie Jurtschitsch of Weingut Jurtschitsch in the Kamptal. In 2012 they conducted a three-way juice swap with Saar producer Maximilian Von Kunow of Weingut Von Hövel. In 2016 – the second edition of Wurzelwerk – the Hasselbachs’ great friend Theresa Breuer of Georg Breuer came into the fold.
The three of them exchanged a portion of their harvest with the motto, “Give me your juice; I’ll give you mine”. They made one wine each with fruit from a single site on each other’s estate. The vineyards – all effectively grands crus, whose real name couldn’t be used because this boundary-pushing concept breaks local wine laws – were: Nonnenberg (nicknamed Die Nonne Berg) in the Rheingau; Rothenberg (Der Rote Berg) in Rheinhessen; and Heiligenstein (Der Heilige Stein) in the Kamptal. The grapes were vinified similarly with minimal intervention (spontaneous fermentation in stainless steel) in three separate cellars, each with a personal interpretation.
These winemakers have travelled far and wide, gaining international experience before coming home to work at their parents’ wineries. They’ve taken the helm and are facing challenges with innovation. At the same time, they’re mindful of old values: culture, customs and the environment. Wurzelwerk  isn’t about novelty; it’s about rediscovering a winegrowing philosophy – an exercise in mindfulness, observation and exploration. 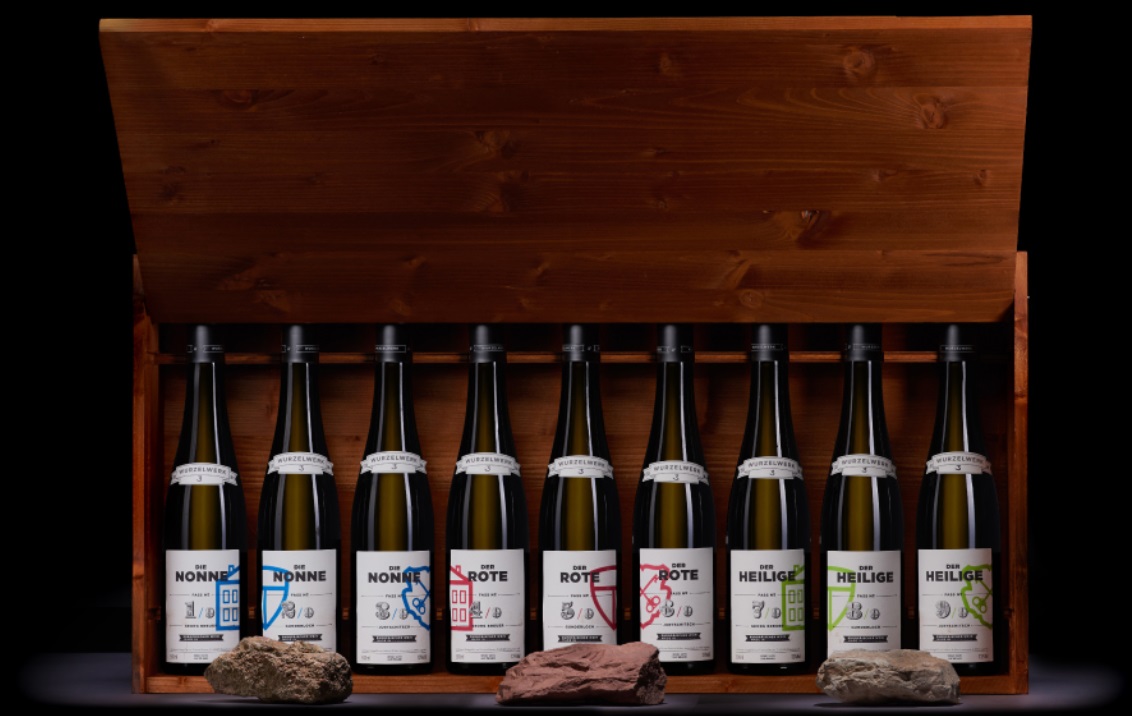 *These are available only as nine-pack RRP  $990

Germany is a country in which the vineyards are given original names. Just think of “Kröver Nacktarsch”, “Trittheimer Apotheke”, or “Bernkasteler Doctor”. This Rheingau vineyard owes it’s name to the nuns of the Tiefthal abbey (Of the diocese Limburg) who worked these slopes by hand for centuries. The nuns lived in a neoclassical villa, which – still in use – towers high above the vineyards today.
This location is owned solely by Georg Breuer, making it one of the few monopolised locations in Germany, where commonly many wineries share the best-known appellations. The vineyards are south- and southwest-facing, range from 108 to 183m above sea level, and have a slope of 28-57%. The majority of these slopes are planted to Riesling, with a scattering of Spätburgunder (Pinot Noir) vineyards.
The soil is virtually free of limestone, and is composed of phyllite slate and quartzites, which are covered in a layer of loam and loess. Phyllite slate is the midlayer between clay and mica slate. The grey face of the mountain is apparent in areas uncovered by loam, leaving the slate bare. This slate gives Breuer Riesling it’s characteristic minerality, which only after aging, translates into incredible elegance.
Rieslings from this terroir are known to be “long-distance runners”; these wines should be aged – at the least – five to seven years before one even thinks of opening them.

The Rothenberg site encompasses around 20 hectares and is situated at the north end of the “Roter Hang” between Nackenheim and Nierstein, directly upon Rhine. A rock stratum from the Oberrotliengenden period (around 280 million years ago) came to the surface as a steep slope facing southeast towards the Rhine as the river carved its gorge. The Rothenberg has red plates of shale with thin calcareous veins. The red colour is due to iron content (hematite) that formed during subtropical climate conditions. The slope’s gradient ranges from 30 to 80%. Riesling vines here yield racy, delicate, fruity wines of extraordinary elegance, marked minerality and tremendous ageing potential. 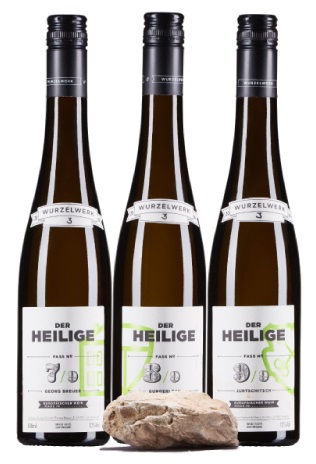 Situated to the north-east of Langenlois, Zöbinger Heiligenstein is a vineyard of truly mystic intensity which for centuries has been justifiably among the most renowned in Central Europe. The river Kamp curves at its southwest foot, changing direction from north-south to west-east and flowing on into the open Danube Valley. The unique geology of the Heiligenstein, which reaches an altitude of 360m, stems from the Permian era around 270 million years ago. The soils are compressed desert sandstone with abundant quartz and high silicate content. The forest on the plateau brings cool, humid air to Heiligenstein, which is welcome in the warmest and most highly exposed site in the Kamptal region. Between the vine rows thrive flora and fauna that are otherwise found only much further south in Mediterranean regions. Rieslings from the Heiligenstein are exceptionally fine and spicy in their expression.