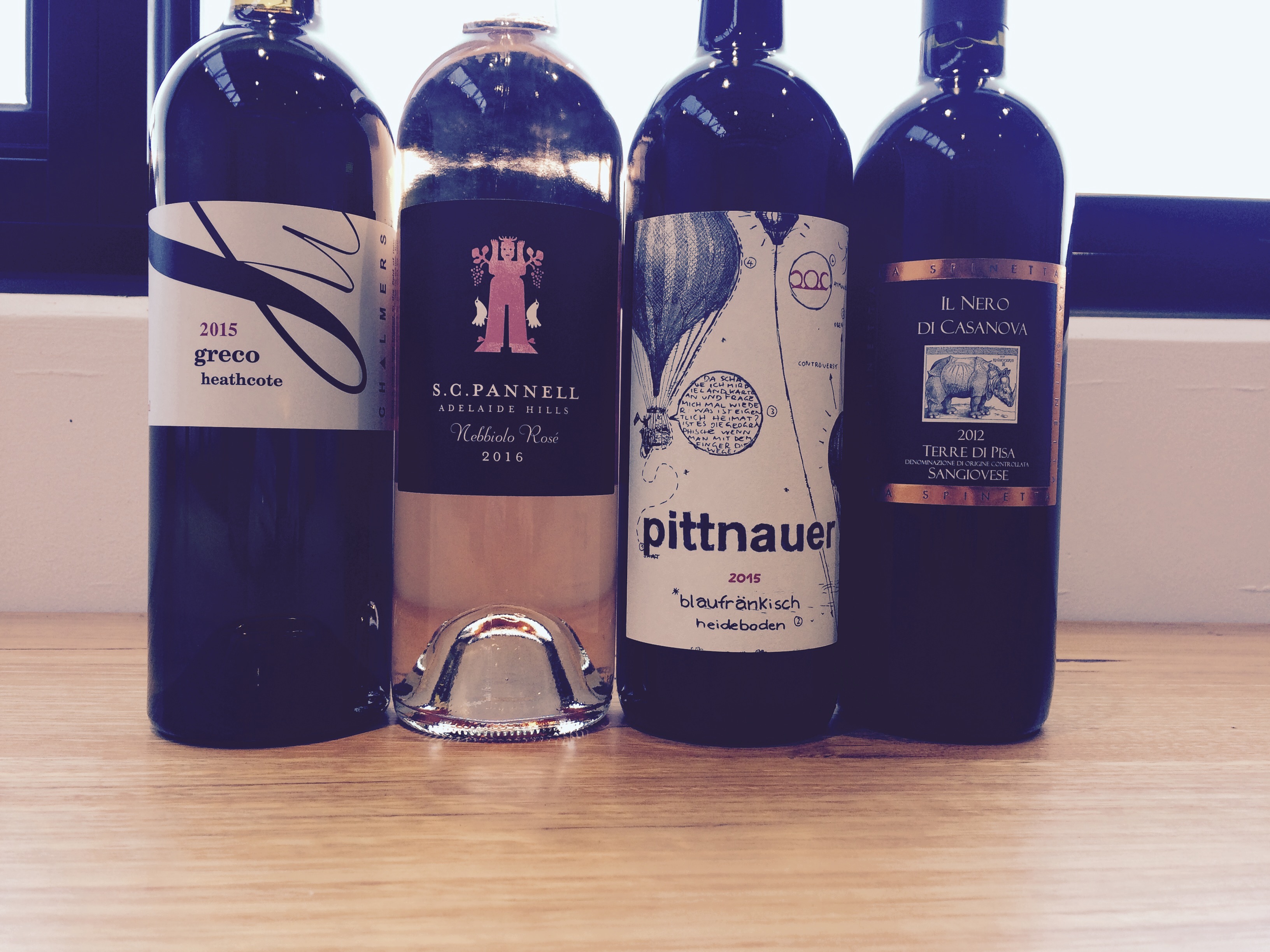 Vive la différence! Part of wine’s magic is the way it takes you places. Often we long for a glass of something familiar and head home to our personal haven. But sometimes what we seek is that thrill of discovery – to go somewhere new and exciting. A foreign accent, an alien landscape, a taste of the exotic.
Here’s 20 delicious ways to get off the beaten path – a passport to expand horizons while keeping the purse strings reassuringly tight…

NV Dr. Loosen Riesling Sekt Mosel, Germany RRP $39
No, Riesling isn’t exactly alternative, but bottle-fermented bubbles from the Mosel pushes it into unfamiliar territory. Sparkling wine of course has a long, rich tradition in Germany, where it has been called “Sekt” since the late 1800s. Germans are the biggest consumers of sparkling wine in the world, and most of the Sekt they produce is sold at home. So here’s a rare chance to try a dry, bottle-fermented Riesling that has all the purity and raciness of the grape, with a creamy mousse to soften it up.

2015 Stift Göttweig Messwein Grüner Veltliner Kremstal, Austria RRP $25
The Göttweiger Messwein, or altar wine, has been an institution at this Benedictine monastery for centuries. It cannot be produced without the permission of the bishop, and it must be only natural and unaltered. With about 12% alcohol Messwein is the lightest wine – very easy and drinkable. Dry, fruity and light with classic – though subtle – Veltliner spice. Animated on the nose; multilayered with notes of citrus fruit, red apple and rosewood. Fresh and elegant on the palate; expressive, with good length.

2015 Villa Wolf Gewürztraminer Pfalz, Germany RRP $23
Villa Wolf Gewürztraminer is clean, fruity and wonderfully light on its feet, showing off the aromatic charm of the variety. It has a deliciously juicy texture and a delightfully delicate aroma of spice and fresh roses. It’s very refreshing to drink on its own and makes a perfect accompaniment to spicy Asian cuisine.

2015 Chalmers Greco Heathcote, Australia RRP $29
I really enjoyed the 2014 rendition and this white, originally from the Campania region in southern Italy, continues the form. Peach, pear and spice aromas are floral and complex. It’s textural and grippy with a chalky element behind the pear, peach and dried herb flavours. There’s a pithiness on the finish that works really well with food. 93 points. Ben Thomas, The Weekly Review

2013 La Spinetta Vermentino Tuscany, Italy RRP $32
100% Vermentino from 10-year-old vines grown on a 180m-high, south-facing vineyard on mixed clay and sandy soils. Fermented with natural yeasts, the wine spent four months on lees in stainless steel. A perfect example of what Vermentino should be, with a rich yet complex nose showing scents of pine, seaweed, citrus and flowers. Medium-bodied and textured on the palate, with notes of almond meal, fresh peach and lime framed by crisp acidity on the finish. True Tuscan class.

2014 Chalmers Fiano Heathcote, Australia RRP $33
Straw-coloured. Taut, brooding style. Stonefruits and spice with a subtle cedary-creaminess. Honeysuckle. It gets your juices flowing as you put your thinking cap on. There’s a bit of mineral to this, but the fruit prevails. The dude abides. Perfectly pitched in all ways. 92 points. Campbell Mattinson, The Wine Front

2014 Matrot Bourgogne Aligoté Burgundy, France RRP $33
What a cheeky little delight this screwcapped Aligoté is! It’s from vines with an average age of 50 years. It’s a little bit of a lot of things: creamy, lemony, flinty, briny, tangy and raw almond-y. It’s a lot of some other things: tasty, smashable and refreshing. I recommend it highly. 91 points. Gary Walsh, The Wine Front

2015 Pittnauer Blaufränkisch Rosé Burgenland, Austria RRP $25
A dusty, savoury Austrian expression of the Blaufränkisch variety has a nutty and marginally confectionary bouquet of red cherries and flowers backed by a hint of cranberry and marzipan. It’s long, smooth and savoury, with juicy, almost sour-edged raspberry and red cherry fruit punctuated by refreshingly bright acids and underscored by a fine, dusty extract.

2015 Domäne Wachau Zweigelt Rosé Wachau, Austria RRP $26
Most of the fruit is Zweigelt from Weissenkirchen, Wösendorf and Joching. The sandy loess soils in some parts of these villages yield particularly fruit-driven and elegant wines. The Zweigelt vines are cultivated mainly on steep, terraced vineyards. Bright, vibrant pink; open and playful on the nose, with delicate aromas of redcurrant, ripe bramble fruit, wild strawberries and a little spice. It’s fruity and medium-bodied on the palate, well balanced with refreshing acidity.

2014 Dominique Piron Gamay Rosé Beaujolais, France RRP $27
100% Gamay from vines in Corcelles with an average age of 40 years. The subsoil is a patchwork of granite, clay and limestone which gives the wine its nuances. Very crunchy, pure and fresh. Some hints of candy, but enough dryness to keep that in check. Quite chewy and supple at the same time, with nice density and a dry finish.

2016 S.C. Pannell Nebbiolo Rosé Adelaide Hills, Australia LUC $35
Stephen Pannell calls Nebbiolo “vinous heroin”, and indeed he primarily goes to the trouble of making it to score a fix of this poised, perfumed and textural rosé. The fruit comes from same Gumeracha vineyard as Steve’s much admired S.C. Pannell Nebbiolo. The rosé mostly comprises the highly perfumed 111 rosé clone of Nebbiolo grown on this biodynamic-certified site. The grapes are harvested by hand and crushed to tank, where they are given around eight hours’ skin contact. They’re then pressed and fermented, with the early press cut critical to keep in check Nebbiolo’s notorious tannins.

2015 Chalmers Nero d’Avola Heathcote, Australia RRP $27
The major Sicilian red grape, there’s a few people making Nero d’Avola in Australia and much of it comes from the Chalmers’ vineyard in Heathcote. My goodness this is easy drinking. It’s bright and breezy in nature, but there’s complexity to the earthy raspberry, liquorice root and dark berry flavours. Ben Thomas, The Weekly Review

2015 S.C. Pannell ‘Dead End’ Tempranillo McLaren Vale, Australia RRP $31
From the master of modern Aussie drinking comes this Tempranillo from the Koomilya & Sellicks Hill vineyards in McLaren Vale. This is highly perfumed, vibrant and complex with sweet black cherries, sarsaparilla, and good hints of exotic spice. A plush, light- to medium-bodied, juicy wine with leafy, dusty tannins on the finish.

2014 Pittnauer Zweigelt Burgenland, Austria RRP $32
Zweigelt is a crossing between the indigenous Austrian varieties and St Laurent. This, too, is grown on various sites in the village of Heideboden in Austria’s Burgenland. Wild yeast fermented and matured for 12 months in used barriques. It’s a deep, spicy wine, with brooding, slightly darker fruit notes of black cherries, blueberries and mulberries with a touch forest floor and sandalwood spice.

2012 La Spinetta ‘Il Nero di Casanova’ Sangiovese Tuscany, Italy RRP $33
100% Sangiovese mostly from the Casanova vineyard, with around 20% sourced from the Sezzana site. It’s a vibrant ruby red, with candied orange, dark fruit and dried flowers on the nose. It’s full-bodied with soft, powdery tannins and a chewy finish. Funky and intense, with lots of berry and bitter chocolate characters, elegant but with delicious richness.

2014 Cigliuti Dolcetto Serraboella Piedmont, Italy RRP $37
Dolcetto, the “little sweet one”, is a staple of all-day, everyday drinking among the families of Piedmont. This comes from the Serraboella cru in the Barbaresco production area, where Cigliuti is a traditional and highly respected producer. “The 2014 Dolcetto d’Alba is dark, juicy and flavourful, with plenty of bluish and purplish fruit, dark spices and licorice,” writes critic Antonio Galloni of Vinous Media. “Drink this mid-weight, fruit-driven Dolcetto over the next few years.”

2013 Pittnauer St Laurent Burgenland, Austria RRP $40
From various plateau sites around Gols in Austria’s Burgenland: Salzbergacker, Goldberg, Zwickelacker and Edelgrund. Wild yeast fermented and matured 6 months in used barriques. “Fragrant and Pinot-like on the nose,” writes Jancis Robinson‘s offsider Julia Harding MW. “Light and red-fruit-scented on the palate. Playful but persistent in its freshness. Delicate yet all in balance.”