Make no mistake: This is a landmark.
And just for a moment take in that land on which the Chalmers family is making its mark!
Drink in that colour, that warmth, that space!
It’s undoubtedly Australia. Inland Australia, with its own rhythm, its warm, red dirt and blazing sun.
It is a place where grapes – millions of tonnes of them – have grown.
But till now, none have grown like these. It has taken a lifetime of journeying, enquiring, importing, planting, propagating, trialling, observing and sharing to get to this point.
The dazzling palette created by Bruce and Jenni Chalmers has been adopted and adapted by sisters Tennille and Kim Chalmers, together with Kim’s winemaker husband Bart van Olphen.
And this second generation has taken well-chosen colours with which to paint the next chapter in Australian wine.
Sicily’s Inzolia and Puglia’s Negroamaro were the pigments put into the ground, selected for their attributes of heat tolerance, medium to large berries, thick skins and late-ripening grapes.
The bush-vine site was established in 2017 at the heart of the family operation in the Murray Darling region in Merbein, northwest Victoria.
It was developed organically with composted cow manure and continues to be managed with no herbicides or pesticides.
The vines grow a fraction above sea level on soils of deep red Murray sand with limestone underneath. They’re spaced at 2.5m x 2.5m – just far enough from each other to create their own catchment area and reap the water they need to survive, minimising competition from neighbouring vines.
In fact, the only input the vines have needed is a drop of extra “rain”, in the form of an overhead sprinkler. This is inevitable given the region’s low natural rainfall. Still, irrigation is well below the amount of water recommended to grow healthy productive vines – and less than the average natural rainfall in the varieties’ native regions of Italy.
But those aren’t the parameters of an experiment. This isn’t a fleeting fad.
No; it’s a landmark.
These are excellent wines of presence and provenance – fully realised, fresh, long and brimming with the confidence of the right fruit grown the right way, in a place where it belongs.
We congratulate the Chalmers on their endeavour and imagination, and wholeheartedly commend these wines to you. 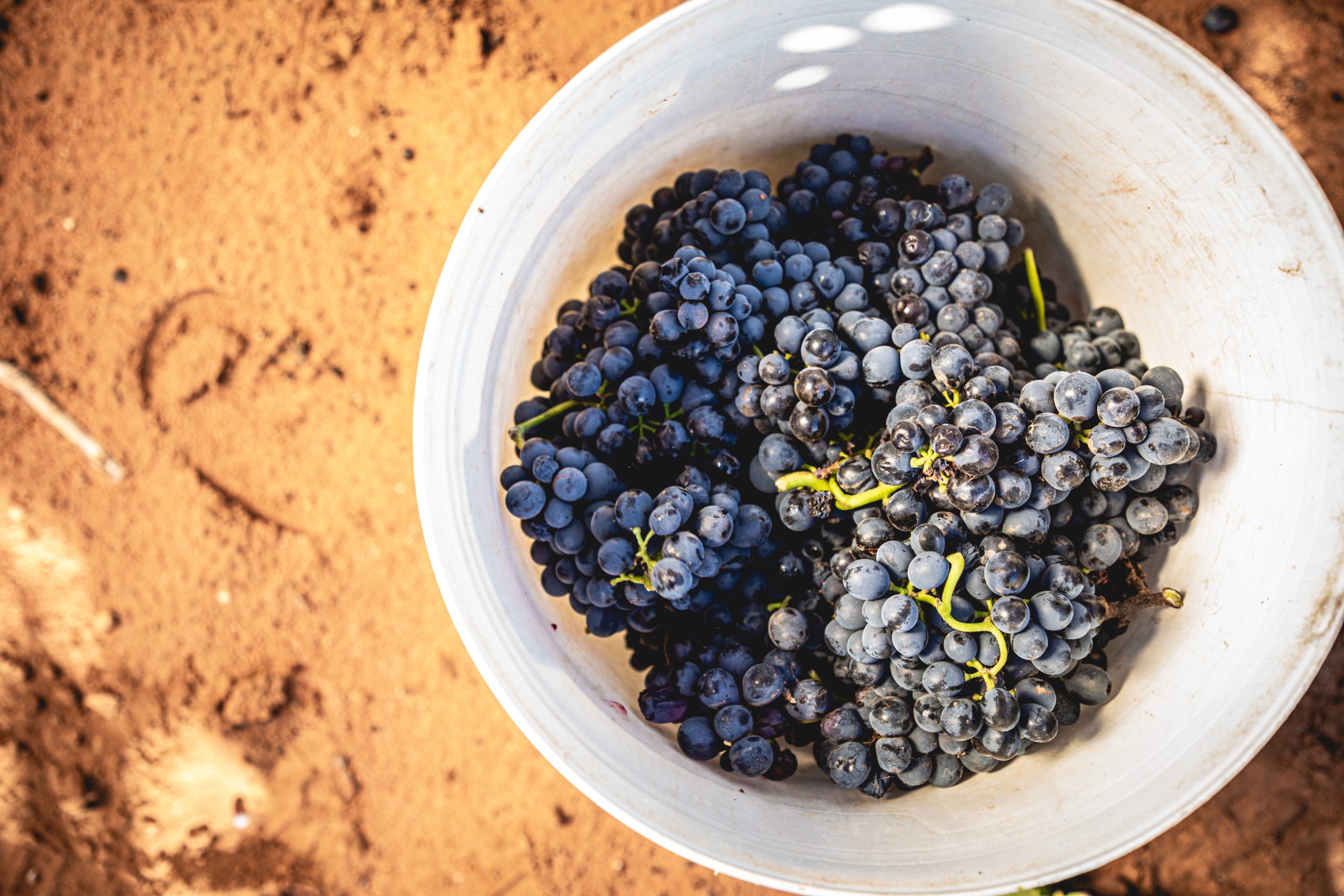 The Inzolia and Negroamaro are grown using the alberello (little tree) pruning system and vine establishment, an ancient growing method popular in coastal areas of the Mediterranean. Its strong structure is proven to survive often damaging sea winds from Greece to southern France. The upright vine cane and canopy position in this alberello formation also allows for welcome shading directly onto the fruit zone below in the heat of the day.

2021 Chalmers Bush Vine Inzolia RRP $54
Fruit for the 2021 Chalmers Bush Vine Inzolia was hand harvested on 19th February 2021 and pressed as whole bunches. The wine fermented naturally on full solids with indigenous yeast in a temperature-controlled vat. Maturation was on fine lees in stainless steel for eight months. The wine is unfined and unfiltered, with minimal sulphur addition.
Looking at the wine, pale golden hues shine from the glass. Immediate impressions are of attractive freshness and purity, opening up to fragrant and perfectly ripened peaches, extending to more exotic fruits like fig, quince and cantaloupe. You can start to identify the welcome intensity of fruit on show from the “dry-grown” management of the vineyard. Nice savoury edges develop and a slight toasty note follows, signs of natural ferment and extended lees contact. Intense yellow and orange blossom and preserved lemon lift the wine out of the glass along with delicate wild herbs, fennel seed and a lick of salt bush.
On the palate the same intensity and density of fruit carries through. It’s a moreish mouthful but not without definition. The chewy structure, a character typically associated with red wines, shows grapefruit pith and sweet cooking spices of clove and star anise with an orange-rind biscotti texture. It’s a confident and complex wine balanced with detail and persistence.
This wine drinks beautifully now with potential for ageing too. We look forward to seeing where this wine will go. Food pairing is versatile, from aromatic chicken to pumpkin and dried sage ravioli with burnt butter, rich shellfish fregola, or sticky Asian pork. – The Chalmers family

This is a big deal. Chalmers has established a bush vine vineyard in the Murray Darling region of Victoria, and planted it to heat tolerant varieties (Inzolia and Negroamaro), with the intention of drastically reducing water consumption. It has to be remembered that this region is one of the hottest wine-growing regions in the world, and that the average water usage for wine production here is 6 megalitres per hectare of vineyard. This Inzola (and Negroamaro) has averaged 0.5 – 1.6 megalitres per hectare in its short life, a dramatic reduction in anyone’s language. If this venture works, it could inspire a drastic re-shaping of a major/important Australian wine region.
These bush vines have been planted at 1600 vines/hectare. Prior to these vines going in the land was home to an orange orchard, which had been abandoned, or at least had its water turned off. Six years of zero water still had these orange trees surviving/thriving, and producing juicy fruit, which is why the Chalmers family chose this site. Given how low the average rainfall is in this region, and how low the applied water/irrigation has been, the amount of water these vines are living on each year is “well below what is considered the normal requirement to grow healthy, productive vines, and is also below the average rainfall in the varieties’ native regions of Italy.”
It’s a bit exciting, really, as a story. But the wine itself is better again.
This is full-on for character, in a great way. It’s just so generous and lively in both a fruit and non-fruit way. Quartz, stones, yellow stonefruit and quince-like characters charge towards woodsy spice, florals and toast. The flavours tumble over themselves, the mouthfeel keeps everything rolling, the alcohol gives it an attractive kick. There’s body to this white wine, substance, chew. This would slay them at the dinner table; it could easily stand robust food. Wow, we’ve got a live one here. 94 points. Campbell Mattinson, The Wine Front June 2022

2020 Chalmers Bush Vine Negroamaro RRP $54
Fruit for the 2020 Chalmers Bush Vine Negroamaro was harvested across two separate passes. The first took place on the more elevated and exposed side of the vineyard on 28th February, the second on the lower part of the vineyard on 16th March. Each parcel was vinified separately. The fruit was handpicked and destemmed. This first pick was 100% whole berries fermented with indigenous yeast and basket pressed after 17 days on skins. The second pick was also all whole berries fermented naturally, this time basket pressed after 35 days on skins. Malolactic conversion was spontaneous. The parcels were blended and the wine matured in a combination of seasoned French barriques and small stainless-steel vessel and bottled 12 months after the harvest. The wine is unfined and unfiltered, with minimal sulphur addition.
Looking at the wine, soft plum-purple hues herald a vibrant wine in the glass. Early impressions are of an earthy dustiness and pure fruit leading into cherries, dried blueberries and quandong jelly. Rosemary flowers and wild thyme complement that recurring vibrancy and freshness in the fruit. The extended maceration gives the wine good presence in the mouth with a pleasant, fine-sand texture. More savoury characters of wattleseed, worn leather and Murray Pine sneak through, lengthening the palate even more. The alcohol sits in the background. Aromatics allow the wine to finish with a delicate and fragrant palate of fresh liquorice, lifted lavender and rose petal. The wine is medium bodied, with lovely length that leaves you intrigued and wanting more. It’s a little wound-up, in a nice way, and hints that it will unfurl nicely, drawing on the delicate fragrance and spice characters in the coming years.
Food pairings aplenty here; think confident flavours in medium-weight dishes: smoked eggplant ratatouille, guinea fowl with braised radicchio, or a rosemary and salt bush slow-roasted lamb. – The Chalmers family 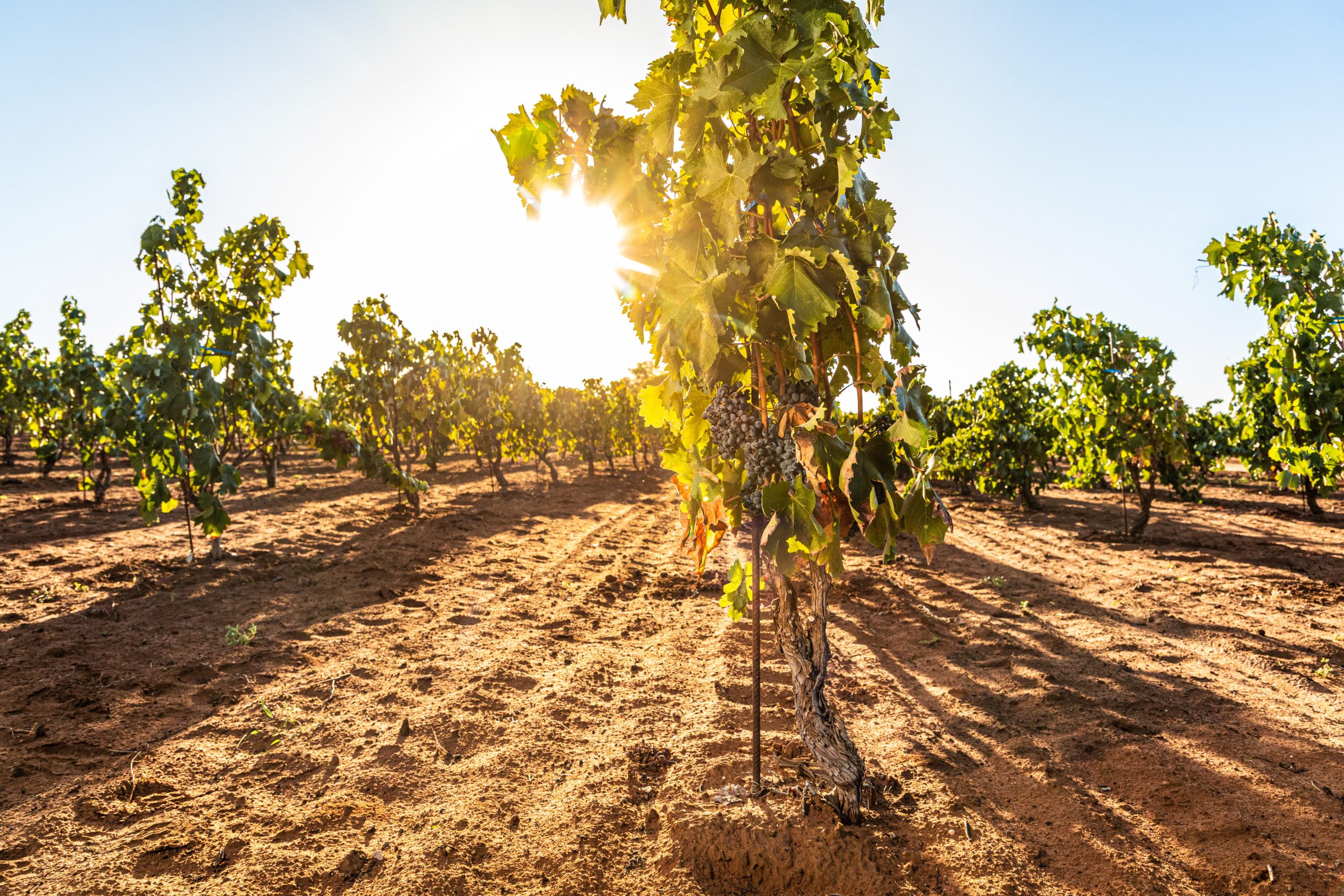