The whole idea of Burgundy is a convoluted one and the more you delve the more apparent this becomes. Inheritance laws play a big part in this. In the case of the Boisson family Bernard says ‘Je suis mort’ with a twinkle in the eye followed by a belly laugh by which you can’t help but be reminded of another Chardonnay and Pinot Noir great from closer to home who’s a great soul but doesn’t suffer fools – one G. Farr of Geelong. What M. Boisson is getting at here is a nod to the fact that by renaming the domaine Boisson Frère et Soeur they are futureproofing the next generation at least. Nothing else changes – it’s apparent that Pierre, Anne and Bernard grow and make all of the wines and if what we were exposed to on a cold Saturday morning in December is anything to go by, they’re really just getting started.

They don’t “do” visits – if they did it would consume every minute such is the level of requests and knocks on the door for a look-see. We’re guilty of being part of this over the last five or six years so to be finally standing there in the cellar getting to know each other properly was quite a thrill for this old fox.

As the morning unfolded it became clear that this was fast turning into one of those special Burgundy experiences that would live long in the memory. They’re also not very interested in the whole idea of ‘selling’ – the least interesting part of the process as far as these guys are concerned so, again, we’re delighted to have finally weaseled our way into their consciousness. If you do a Google search on Boisson-Vadot you won’t find very much, and I think this is part of the fascination about the domaine (aside from the wines being fabulous – and seemingly ever more so). It’s all very mysterious.

The question ‘How long has the family been growing wines in Burgundy?’ is met with another of those belly laughs, followed by ‘Since Jesus was around’ by way of response. In fact, the first domaine bottlings were in 2000. Prior to that the grapes were sold to the négociants. The name Maison Leroy came up at this point but was quickly retracted, but one would not be surprised if that were in fact the case. There’s a connection with the Morey family way back, too. Isn’t Burgundy just the best?

Fair to say the Boisson family have been working these terroirs for a hell of a long time. Production these days sits at around 7,000 cases. Winemaking they say is straightforward, new oak never exceeding 30% and bâtonnage only in moderation. But they aren’t really giving much away and as the whole conversation takes place ‘en Francais’ it’s tricky to garner more. The question around how many acres are under vine is similarly sidestepped. On that the family view is ‘you come to our place, you speak our language’ and the fact that Gin and I are making our best efforts in that regard do not go unnoticed. That and yours truly wearing a silly hat that matches Bernard’s. It’s often the little things.

You just get the impression that they don’t want to have their wines and story pulled-apart and dissected. It’s a very old-fashioned salt-of-the-earth affair. Spending more time talking than tasting, we do eventually start to pull corks… 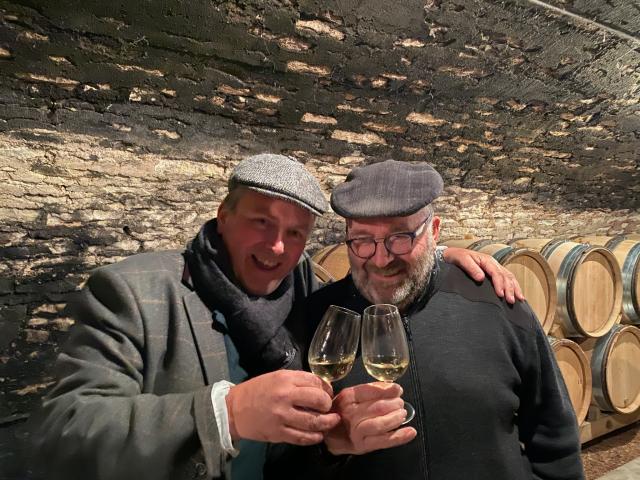 First up is the 2017 Pierre Boisson Bourgogne Blanc RRP $115, which is sourced from six parcels stretching from Meursault and Auxey-Duresses across to Volnay. What a compelling wine to start a tasting with, and to be frank I don’t believe any other domaine makes a better Bourgogne. It’s immediately very tasty in a saline, wet stone, white fruits, hint of matchstick sphere, but lots of flavour and palate impact to boot. From 2018 this wine is being split into its 6 separate components as Pierre and Bernard think it’s a real shame not to be doing so, such are the nuanced differences of the parcels. For now, the ’17 looks composed, dense and satisfying with insane freshness and verve.

The *2016 Anne Boisson Meursault Sous La Velle RRP $330  is from a 1ha parcel within this large lieu-dit on the east side of the village, and is best summed up by describing it as ‘essence of Meursault’ – opulent, easy, very ‘Burgundian’ but with the trademark Boisson strike of match and intensity. The 2016 we’ve seen from the domaine shows how they managed to achieve some real finesse in what’s often viewed as a tricky vintage for whites.

2017 Meursault ‘Les Criots’ This new-release lieu-dit that had previously been blended away into the Village but is now deemed far too expressive not to see the light of day in its own right. Les Criots is on the northern edge of Meursault bordering Les Santenots du Milieu in neighbouring Volnay. A more tightly wound mineral expression from a parcel, sadly we will have to wait for an allocation of this one. Time has told us that we can be patient when it comes to Boisson…

Next was the *2017 Pierre Boisson Meursault ‘Les Grand Charrons’ RRP $330 from their 1ha parcel within this 18ha lieu-dit. First time this one has been moved to the Pierre Boisson label and to say I am mighty pleased with the release and allocation is an understatement! This was the wine that first captured my attention from the domaine and the ‘17 is one of the purest and most sleek expressions yet. It’s everything you want Meursault to be.

Next up, a treat: *2016 Boisson-Vadot Meursault Les Chevalières RRP $425. The Boisson family own a 0.5ha parcel here in this treasured lieu-dit that sits on the hill between Les Rougeots to its south and Meix Chavaux to the north. Lots of famous neighbours here! This one is definitely grand cru like in its breadth and dimension. 20+ months in barrel. All compact stone fruit and oatmeal, with a lemon-curd core and length for days.

Next point of discussion was when we posed the question to Bernard of whether he could describe in his words the differences between Auxey-Duresses Blanc and Meursault Blanc as we tasted another wine that we’ll have to wait for: a scintillating 2017 Pierre Boisson Auxey-Duresses 1er Cru ‘En Reugne’. Auxey, he says, is all ‘uptight and austere’; Meursault is a barrel of laughs. I did NOT appreciate his assertion that I’m Auxey and Gin is Meursault! Anyway, first time tasting this climat from the domaine (or any!) I can see what he means. Like grown-up Chablis! Want.

At that point it was close to lunch time and as we were there for a morning (only!) visit we were given the option of tasting some reds or having a look at a cellared white. Passion took over from work at that point and we opted for the latter. Turned out to be a rather spectacular 2008 version of the wine just before. Served blind I tripped at the first hurdle and called it as a Meursault but did manage to ping the vintage. The Yanks never get anything right; Bernard reckons. In!!

At any rate, we’re now very excited to release our first major shipment from Domaine Boisson Frère et Soeur as its henceforth to be known. – Patrick Walsh, January 16th, 2020

WINES FROM THE NEW SHIPMENT

2017 Anne Boisson Aligoté RRP $95
Single-vineyard wine, with two-thirds of the vines aged between 50 and 70 years old. Apple, pear, pastry and cream on a nose that evokes good Blanc de Blancs. It’s fresh and vital with a silky feel in the mouth. Crunchy fruit with good intensity, a touch of honey and nice grip. Saline finish. Very moreish, energetic white.

2017 Pierre Boisson Bourgogne Blanc RRP $115
White-fleshed fruit, citrus and salted almonds on the nose. Classy feel with texture and stony purity. Charged with energy, this has lovely tension and good grip, finishing with lively fruit, honey and a salty tang.

2017 Pierre Boisson Meursault RRP $280
The fruit comes from Les Criots and Les Perchots on the northern side of the commune, giving a pure style with a long, driving line. Picked on 2nd September. Cold settled for 12 hours before barrique fermentation (20% new oak). Lees stirred four or five times at the end of alcoholic fermentation, in early spring. 22 months’ élevage. Full malolactic conversion. Unfiltered. Racked the day before bottling.
Nutty, earthy nose with a touch of struck match. There’s very good depth to a silky palate that shows clean fruit and oatmeal. It’s deeply satisfying with real presence and length, leaving a lovely, lasting Meursault imprint on the palate.

2017 Pierre Boisson Meursault Grand Charrons RRP $330
Lifted floral notes and struck match touch up a stone-fruit and citrusy nose that suggests great style and substance. Immediate presence on entry, this is relatively full-bodied, with a silky, stony feel. Good flesh, lime and cream and a super whoosh of acidity on a soaring finish. Really exciting stuff.

2016 Boisson-Vadot Meursault Chevalières RRP $425
Grand-cru like in its breadth and dimension. All compact stone fruit and oatmeal, with a lemon-curd core and length for days.

RED WINES
Red wines represent around 25% of production of the domaine. All the Pinot is 100% destemmed, with traditional, minimal intervention vinification. They undergo a cold soak before the gradual onset of alcoholic fermentation. The end of the vatting is deliberately drawn out by keeping the temperature down, to allow a process more akin to infusion than extraction. The family want the wines to be pure, fragrant, eminently drinkable. They are not the awkward inconvenience that is the scourge of so many a Cotes de Beaune producer but rather further delicious chapters to the Boisson story.

2017 Pierre Boisson Monthélie Rouge RRP $155
Fruit from three different parcels. Smoke, sap and good oak add complexity to a nose of ripe strawberry and cherry. Relatively soft-hearted and full in the mouth, with forest berries and polished tannins. Nicely integrated with a dash of spice running through the tannins, and good flow to the finale, which leaves a sense of charm and rusticity, in the best sense.

2017 Pierre Boisson Auxey-Duresses Rouge 1er Cru RRP $190
Fairly precise on the nose, with a gravelly note beneath forest fruit and roses. Only medium bodied in a way reminiscent of the most delicate Chambolle-Musigny but with a pleasant sense of roundness on a very pretty palate, which shows excellent integration of nutty oak, fruit and those earthy notes. Very tidy and fresh, with a long, chiselled red-fruit finish. A charming Beaune red if ever there was one.