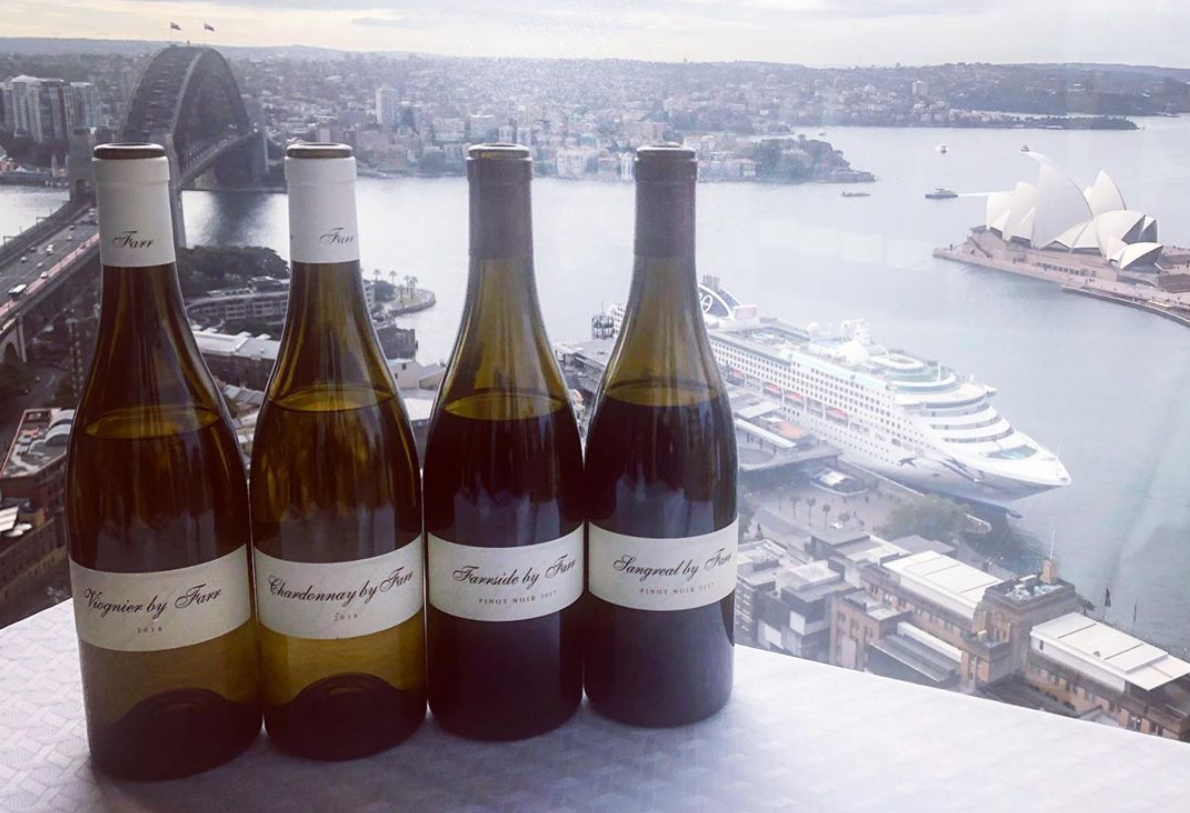 Nick Farr and father Gary are known for not wasting words. It’s a fair point; they don’t waste them. And yet you get more insight from a few plain-spoken sentences here than from your average annual wine magazine subscription.
There are various reasons for the economy of words. One is that the Farrs operate on such an elevated plane that much low-level stuff is immaterial. The 2018 harvest, which bestowed the grapes for this offer’s Viognier and Chardonnay, marked Gary’s 40th year making wine in Bannockburn. This family’s been puzzling out those “one percenters” – those onerous unseen tweaks that ultimately make the difference between good and great – for decades. While much of the big end of Aussie Pinot town is on its first round of close-planted trials, for instance, the Farrs are several cycles down the track. If they knock it, it’s because they’ve tried it. They’re not wondering what results these viticultural or cellar techniques could yield – they’re working out how to edge them closer to perfection on their particular patch.
There’s not a lot of room for conjecture here. Why talk about what might happen when you’ve already been there, done that and proved it? The Sangreal site turned 25 years old this year, while Farrside is nearing its 20th birthday. The Farrs know what works for these vines because they’re seriously hardcore about excellent wine, and they’ve left no stone unturned in lifting the vineyards to the highest level imaginable. But don’t ever mistake that self-assuredness for complacency; it’s simply not in the Farr nature to relent.
Yes, the hits keep coming but that alone is not what makes each release a blockbuster event. It’s a riveting evolution because with vineyards this good, experience this rich and refinements this intricate, the pleasures are boundless in scope and character.

Vintage 2018
The 2017/2018 growing season kicked off a couple of weeks later than normal, due to substantial winter rainfall. The conditions quickly changed from wet to dry after Christmas when almost at full canopy. The vineyards where then reliant on perfectly timed summer storms that helped the season to progress.
Come the 2018 harvest, we found very consistent and evenly ripened fruit, with an abundance of fruit flavour.
Considering how dry the summer had been in Victoria, the precise and limited rainfall fell at ideal times.  The canopies were healthy and the temperature was mild through March, meaning the harvest was electric.  All fruit needed to be picked simultaneously, condensing five weeks work into three and making for fun times. We’re really looking forward to seeing how the wines develop, considering the season was quite different to the previous three. – Nick Farr

Vintage 2017
What a season of rainfall. It rained during pruning and the Moorabool River flooded. It rained during budburst and the Moorabool River flooded. It rained at Christmas and created more humidity than the Farrs have seen in Bannockburn.
Throughout the growing season everything was happening in a timely fashion, if not a little late, which was fine as we could not keep up with the growth at some stages. As we moved towards harvest the vineyard was looking amazing after such great rainfall and a very mild summer. Expectations were very high.
Harvest started on 9th March, which is about a week later than normal. The fruit was quite intense and balanced as a result of a longer, cooler season. After three significant rain events during March and April we finally finished picking Shiraz on 24th April. It was the latest harvest we’ve ever experienced in Bannockburn.
With extended time and cool ripening conditions we’re very happy with the results that are not that dissimilar to the 2016 vintage, yet with greater finesse. Good acidity and structure and, best of all savoury and elegant, fruit flavours. – Nick Farr

2018 Viognier by Farr RRP $78
The Viognier by Farr is a blend of two vineyards. One is the original house block planted in 1994, which has friable red soil over limestone leading to sandstone—similar soils to the Sangreal Pinot Noir and By Farr Chardonnay. The second vineyard is a younger planting of unknown clones in red ironstone soil. The Viognier is a difficult variety to manage, with the tendency to grow horizontally rather than vertically, being very thirsty and having a tendency to become sunburnt very easily. This prompted Nick’s decision to pick the fruit earlier to retain natural acidity while maintaining varietal character, creating a more delicate and refined drink.
Viognier is foot-stomped and left for two or more hours on its skins, to extract phenolics, flavour and texture. The fruit is then pressed, cooled and put straight into barrel with all solids for a natural fermentation. Malolactic fermentation is encouraged with gentle stirring during the end of autumn. The wine is then racked, fined, filtered and bottled 11 months after harvest.

2018 Chardonnay by Farr RRP $95
The Chardonnay by Farr comes from the same site as the Sangreal Pinot Noir. It’s an exposed, hungry north-facing slope of red soil over limestone, planted in 1994. The Chardonnay vines are a mixture of Dijon clones and P58.
The fruit is picked by hand and whole-bunch pressed. All the solids are collected and chilled before being put to French oak barrels (30% new). A natural fermentation occurs over the next two to three weeks at cool temperatures. After fermentation, a bit of stirring helps start malolactic fermentation, which is usually completed by mid-spring. The wine is then racked, fined and lightly filtered before bottling 11 months after picking.

Pear, nectarine and grapefruit, a slight custard top note, and a fair amount of ginger and cinnamon. It delivers flavour quietly and confidently, flinty and powdery texture, toast and oatmeal, spiced apple too. Finish is more to savoury, and it goes pretty long with it. Good stuff. Flavour with some finesse. 94 points. Gary Walsh, The Wine Front August 2019

2017 Farrside by Farr RRP $95
The Farrside vineyard consists of black volcanic soil over limestone on a northeast-facing slope. The vine rows run east to west to shade the fruit from over exposure. It’s a mixture of 114, 115, 777, 667 and MV6 clones. Although the Farrside and Sangreal vineyards are only 300m apart, the differing conditions mean that this vineyard is picked 10 to 12 days later. The darker soils and cooler growing conditions give a more masculine and edgy wine.
The fruit is hand-picked and sorted in the vineyard, then fermented in an open-top fermenter. Roughly 50% of the fruit will be destemmed and then cold soaked for four days. Nick uses only the natural yeast for the fermentation process, which takes roughly 12 days. Grape-stomping (known as pigeage) will occur two to three times a day depending on the amount of extraction required, and the wine is then placed in 50 to 60% new Allier barrels by gravity. It is racked by gas after secondary fermentation, then again at 18 months to be bottled.

An exotic and rich red with ripe-strawberry, plum and orange-peel character. Medium to full body. Soft and fresh finish. Even better in a year or two. Drink now or hold. 94 points. Nick Stock, jamessuckling.com July 2019

A meld of Dijon clones and the domestic stalwart, MV6, this abuts the lauded Sangreal Vineyard, albeit, the vines are younger, of a cooler disposition and hailing from darker soils over a limestone substrata. Hand-harvested and fermented under the aegis of wild yeast with a good whack of whole-bunch fibre, this exotic and sturdy pinot was ten raised in Allier wood for 18 months or so, with a single racking. Darker fruit allusions in a pinot context, corralled by an expensive kirsch richness across the mid-drift, hints of orange zest acidity, ginger and ample clove, cinnamon and turmeric-clad tannins, slinky, a bit edgy and expansive. 95 points. Ned Goodwin, Halliday Wine Companion 2020

2017 Sangreal by Farr RRP $95
The Sangreal Vineyard is the oldest planting (1994) on a north-facing slope of red ironstone on the surface going to limestone to bluestone below. The rows run north to south, gaining full sun exposure throughout the day and resulting in prettier, more perfumed wines. It’s always the first vineyard to be harvested.
Sangreal is consistently made with 60 to 70% whole bunch and aged in new oak. It is fermented in a five-tonne oak barrel with an open-top fermenter, and cold soaked for four days before a natural fermentation of seven to nine days. Once the cap falls, the tank is pressed. The wine is racked only once after malolactic fermentation, then sulphured and bottled, the entire process taking a total of 18 months. The wine is unfined and unfiltered in order to retain its natural flavour and bouquet. Sangreal is the most seamless and perfumed of the three single-vineyard Pinots.

A plush and rich pinot with lots of ripe fruit, such as cooked strawberries and rhubarb. Full body. Velvety tannins and a flavourful finish. Drink or hold. 93 points. Nick Stock, jamessuckling.com July 2019