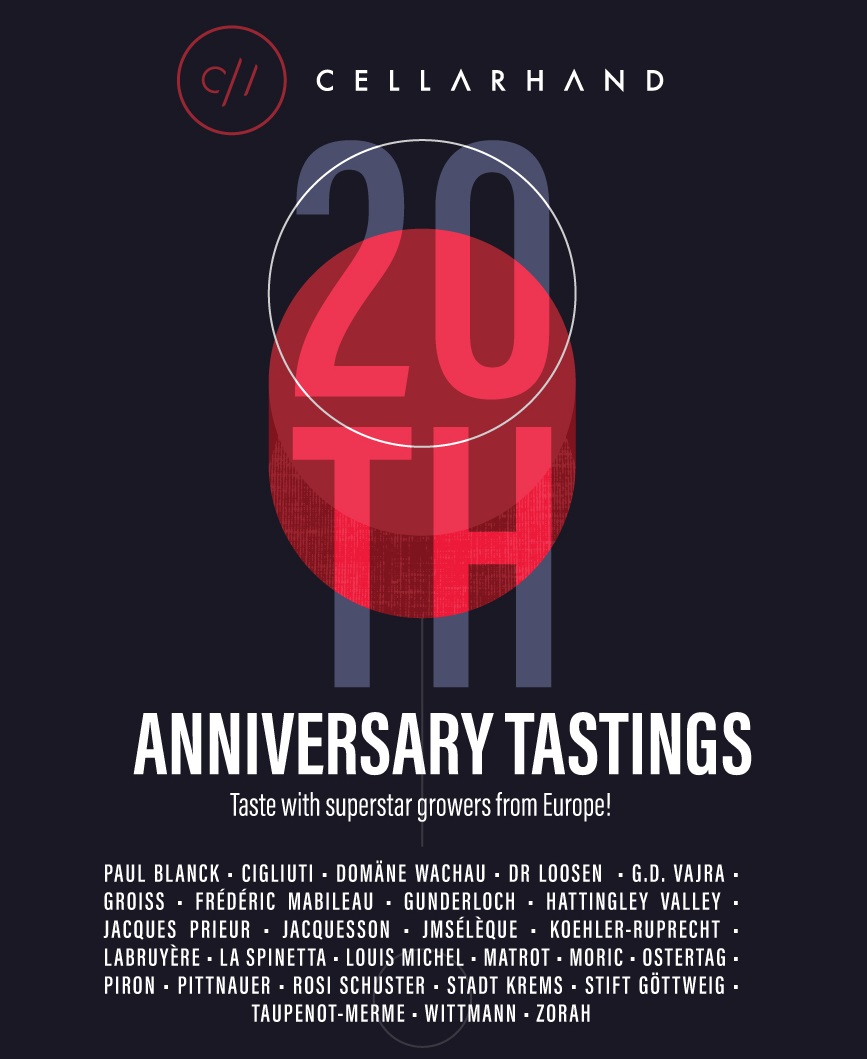 An all-star cast of international winegrowers is heading down under to celebrate the 20th birthday of their Australian importer.
Producers from 25 estates covering Champagne, Alsace, Burgundy, Beaujolais, the Loire, Piedmont, Germany, Austria and beyond are on the way to mark CellarHand’s milestone in February 2019.
They will be joined by some of the best-loved estates from Australia and New Zealand at various trade and public events in Melbourne, Sydney, Brisbane, Adelaide and Perth.
CellarHand was founded in 1999 by former sommelier Patrick Walsh and wife Virginia, inspired in part by a wish to introduce Australians to the wines Patrick discovered in Europe as inaugural winner of the Frankland Estate Riesling Scholarship.
Their initial plans met with amused bafflement from the German Trade Commission, but Patrick and Virginia have turned the likes of Dr Loosen, Dönnhoff and Wittmann into household names among the nation’s winelovers.
Patrick says: “We’ve worked hard and had a great time bringing people quality wines of personality and originality, grown by families who express the best of their regions.
“The wine world is endlessly diverse and fascinating, and the choices now available to Australians reflects this – just look at the presence of Hattingley Valley’s English sparkling wines, the amphora-raised Armenian wines of Zorah or Hungarian dry Furmint from the Moric Project.
“Over our 20-year run, we’re proud to have been leaders and innovators, all the while a taking a considered, long-term approach. Time, conviction and honesty are vital factors in making great wine, nurturing true relationships and building a reputation.
“The growers we represent are like family to us, and the same goes for the many members of the trade, media and general public who’ve supported us along the way.”
Domestic wineries Frankland Estate, Shadowfax and Mount Mary have been in the CellarHand portfolio from the very beginning, and were joined soon after by fellow luminaries such as By Farr, Wantirna Estate and S.C. Pannell.
The likes of Rheingau producer Georg Breuer and Dr Loosen from the Mosel were early members of a portfolio that now boasts 11 prestigious German estates, as well as an unrivalled selection of Austrian winemakers and a superb crop of French and Piedmontese domaines.
And the company is certainly not resting on its laurels. 2018 has seen the addition of CellarHand’s first full-time sales people in Adelaide, Brisbane and Perth, while the Sydney and Melbourne teams have also grown.
The portfolio has continued to expand along family lines, too, with long-time connections such as G.D. Vajra of Barolo and Jacques Prieur of Burgundy joining the offering in the course of 2018.
**********************************************************************************************

There will be numerous opportunities for members of the wine trade and general public alike to meet with our growers and taste their wines during the week-long celebration from Saturday, 9th February until Saturday, 16th February. Please check the ‘Events‘ page of our site, or email Ed Merrison for more details.