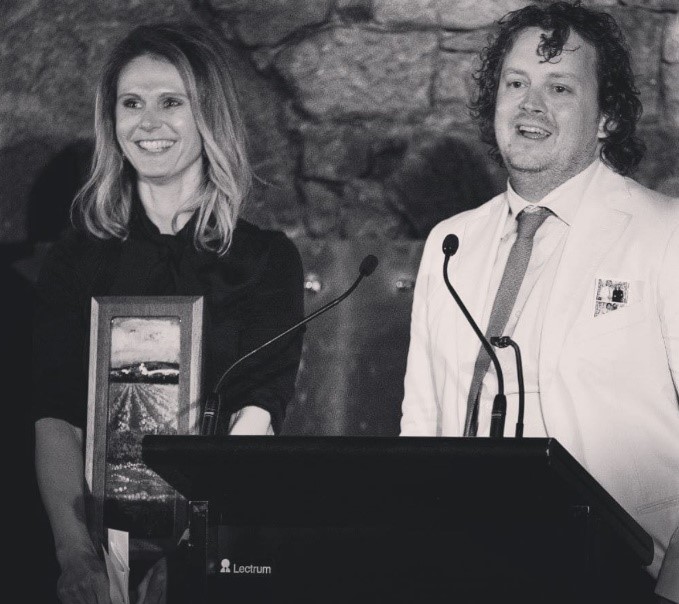 Margaret River is, in many senses, a blessed place. The wild yet implausibly perfect beauty of its Indian ocean coastline hints at effortless epicness. The nonchalance with which it seems to knock out immaculate, flavourful and aromatically beguiling fruit year in, year out similarly hints at a preternatural gift.
Charismatic, ebullient and virtuosic husband-and-wife team Julian and Alana Langworthy embody the magic of Margs. They’ve been making wine together for well over a decade but it is Nocturne – which debuted with the 2015 vintage – that encapsulates their dreams. It is into these wines that they deposit the fruit from their own beloved Sheoak Cabernet vineyard, along with other prized sites they’ve unearthed plus all the care and flair they’ve mustered. The initial three releases of single-vineyard wines have won them a diehard following – so much so that their most recent incarnation’s listing in the portfolio spent some 10 months with the annotation ‘Sold out’ written in the ‘Comments’ column.
That people love the wines give CellarHand, and the Langworthys, tremendous pleasure. None of us takes this sort of thing for granted, and we never will. As a means of encouraging greater access to the joys of Nocturne, Julian and Alana devised a plan – hatched with trademark consideration and verve – to extend the range to include a sub-regional exploration of their wines to sit beneath the enduringly peerless single-vineyard wines.
This ‘SR’ range is here now, an invitation to dive into the boundless pleasures that swirl about where the wellspring of Langworthy brilliance intersects with the easy-flowing charms of Margaret River.

It’s hard to believe that the fourth release of Nocturne is upon us. The support and love shown for our first three releases was astounding and this year we’re thrilled to be expanding our offering to include a sub-regional range and the single vineyard wines. Fingers crossed this gives a few more people the chance to lay their hands on the wine.

Nocturne now comprises two wine ranges. The Single Vineyard or SV range and the Sub-Regional or SR range. Our SV Sheoak Cabernet and SV Tassell Park Chardonnay remain as ever awesomely epic expressions of the best sites in Margaret River. These wines are so mouth-wateringly good it will make your pants tight but alas they remain in tiny supply.

The Sub-Regional range is an excellent opportunity for us to make a little more wine while maintaining our stylistic course of ravishing moreishness! They’re contemporary, unique, funky, cool and fun – with uncompromising quality. For each wine we have sourced a sister vineyard within the same sub-region as the original SV wine, and then blended these to produce wines with great verve and soul. – Julian & Alana Langworthy 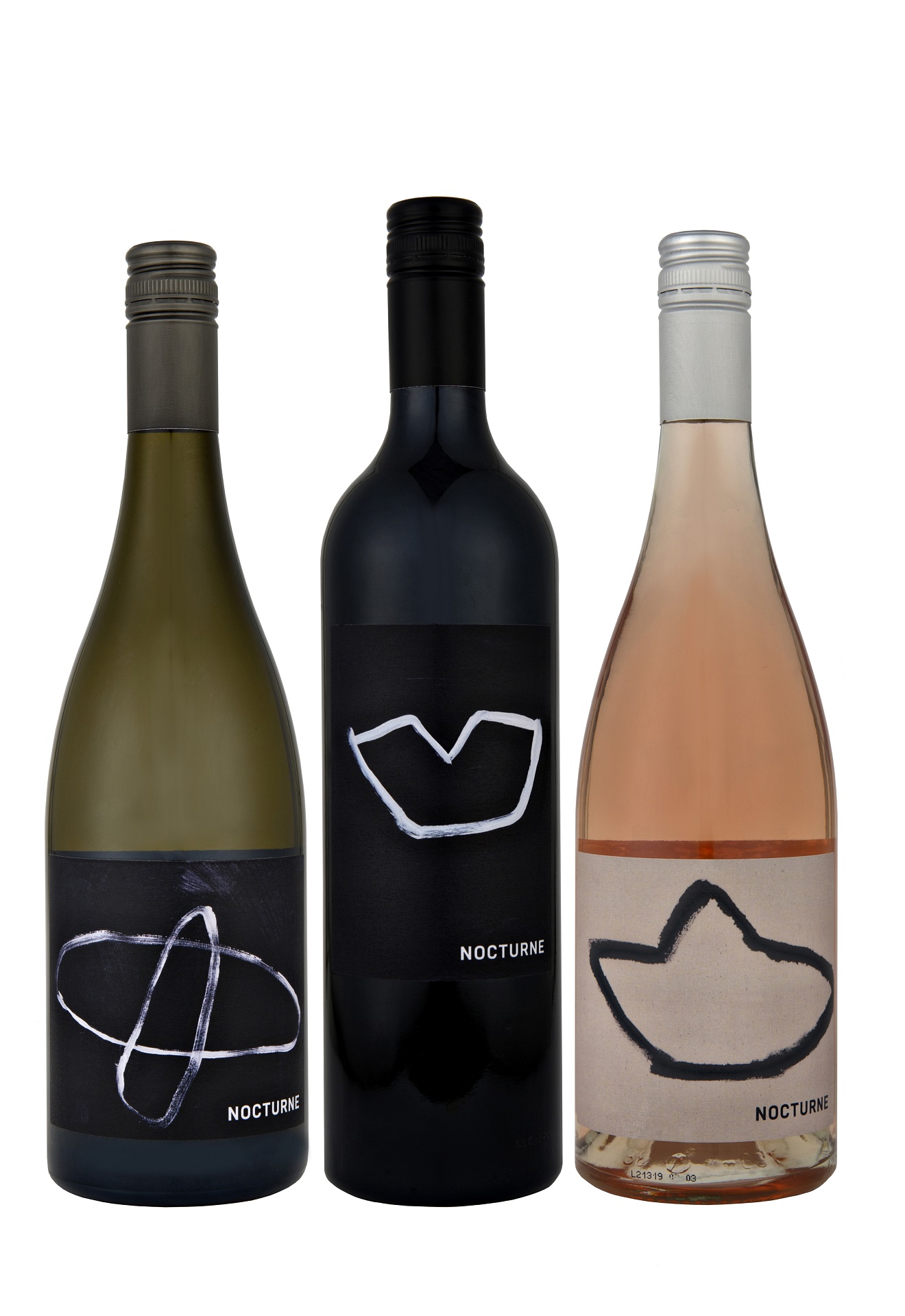 2019 sees the addition of Sangiovese into the Nocturne rosé and we liked it so much it has become the dominant player in the blend. Lighter, finer and slightly more ethereal, it’s blended with 40% Nebbiolo to allow some chew and grip and grown-up appeal. 2019 was a ripping year for rosé in Margaret River. Great early flavours allowed low alcohol picking decisions, resulting in a cracking wine.
The fruit comes from the sub-region of Carbanup in Margaret River, with the sites being relatively flat and warm with fertile, red sandy soils. The grapes were harvested between 16th and 28th April. The Sangiovese fruit was simply destemmed, chilled and pressed using only the free-run fraction of the juice. It was then fermented at moderate temperatures using as always solely indigenous yeasts. After fermentation it was matured for three months on gross lees to add additional texture. The Nebbiolo fruit was hand-picked and, after chilling, whole bunch-pressed directly to old oak for fermentation. This took close to six weeks, after which the wine received a further four weeks’ maturation in barrel. At this stage the final blend between Sangiovese and Nebbiolo was decided and the wine was emptied from barrel/tank, settled, filtered, sulphured and bottled on 3rd August.
We are super stoked with the final wine!!  The texture and acid structure are highlights of what is likely a more approachable and fruit-forward release of Nocturne rosé. As always, best drunk from magnum, on a boat, wearing white…. It’s a pale salmon dream. – Alana & Julian Langworthy

You’re in Treeton now. It’s a weird little area full of hillbillies, dairy cows and interestingly some great Chardonnay vineyards. It’s cold at night and warm in the day, with deep silver/grey sands that we think produce lovely Chardonnay. This exciting new wine is grown on two Treeton vineyards: the original and favourite Tassell Park and a new vineyard called Victory Point.
It sounds a little trite but 2018 was yet another excellent Margaret River Chardonnay vintage (it’s Gods own country after all!). It exhibits similarities to 2017 with great acid line and verve but with fuller, richer fruit weight. The season was early yet as usual these vineyards were some of the last picked on 21st and 24th February – some three weeks earlier than 2017.
The grapes were harvested by hand and whole bunch-pressed directly to new, one- and two-year-old puncheons with a smattering of barriques for good measure, with no settling or fining processes. This juice was then very carefully neglected and allowed to undergo spontaneous fermentation which kicked off on day five after pressing. After a four-week ferment the wine remained on gross lees, unsulphured until August of that year. In November the wine was emptied from barrel, settled, filtered and bottled.
This wine is super cool, just like its new label and its owners! It’s pale green, with more weight and phenolic grunt than its SV big sister – but oh! that texture and length of flavour is to die for. It smells of blossom and gunfights. – Alana & Julian Langworthy

Yallingup is our stomping ground and where the world’s greatest Cabernet and Cabernet blends are being grown! It’s deliciously warm but never hot, with the amazing dual influence of the Indian Ocean and Geographe Bay. In our new ‘Cabernets’ we have used our own beloved Sheoak Cabernet and added some Merlot from the Simpson property belonging to our neighbours, with whom we’re lucky enough to share the amazing valley.
Sometimes shit just goes right. The 2018 vintage is to high-end Margaret River Cabernet what peas are to carrots. It was that good – not too hot nor too cold, with moderately high growing-season rainfall and, most importantly, a long, dry, benign finish. We started picking on 29th March and from the moment the fruit hit the fermenter it was destined to be a classic.
Instantly perfumed and richly coloured, the wine spent 12 days on skins with a peak fermentation temperature of around 28ºC. The wine was pressed to tank and settled briefly, before being transferred to a combination of new (25%), two- and three-year-old barrels to undergo malolactic conversion. The wine was racked only once in this time and, after 15 months in oak, was emptied from barrel. At this juncture we decided the final make-up of 87% Cabernet Sauvignon with 13% Merlot. These wines were then settled together, clarified and bottled.
Cabernet is king, and long will it reign in our eyes. If this modern new blend doesn’t resonate hugely with you all then there’s something amiss in the realm. It’s expressive, medium-bodied and smells of hope wrapped in pure emotion. – Alana & Julian Langworthy