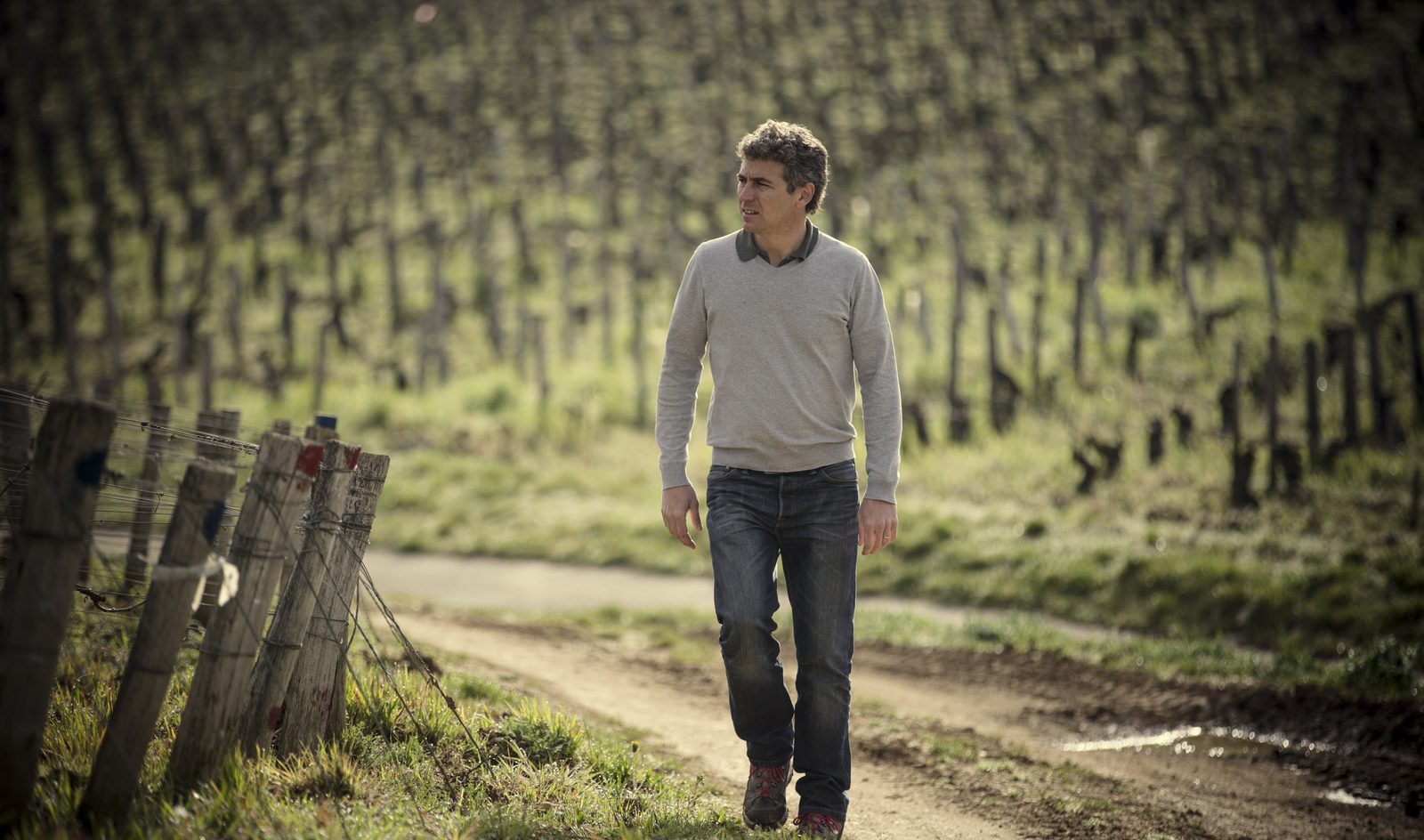 What a blessed relief! After a string of years where Chablis was on the receiving end of a merciless Mother Nature, whose hail and frost decimated crops time and again, 2018 brought a welcome change. It’s a credit to estates like this that they keep smiling through those lean years, and keep banging out brilliant wines thanks to the Herculean efforts of their vineyard workers. Guillaume Michel has seven full-timers out in the field to ensure that his 22 hectares yield the best they can whatever the weather. And no-one would begrudge them the respite that came with the ’18 harvest.
Mild February temperatures gave the first inkling of things to come, with the buds swelling around 7th March before budburst in early parcels came on 25th March, two weeks ahead of schedule. Candles came out a couple of times in April and the first two nights of May also threatened the dreaded frost. Thankfully none materialised. Flowering began on 25th May and was a sign of the early harvest to come. Green harvesting soon followed during the month of June, and by 21st June all the trellising work was finished. Summer brought plenty of warm sunshine, which continued throughout July, August and September. The dry weather kept disease pressure at bay, and but for a couple of hailstorms hitting Butteaux the vines were left in peace.
The drawn-out dry period meant fruit development slowed in late July. Veraison gradually developed around 25thJuly. In fact it was heat that sporadically slowed growth.
Eventually the first grapes were picked on 5th September in ideal weather conditions, and went on until 12th September. “The 2018 vintage is one of high quality, and high volume,” Guillaume cheerfully reported.
At this stage it’s just the ’18 Petit Chablis and Chablis that have arrived as the vanguard for this vintage, with some gems kicking ‘round from the premiers and grands crus from ’15 and ’16.

2018 Louis Michel Chablis RRP $53 screw cap
These vines are situated in the heart of the historic vineyard. The various soils date back to the Kimmeridgian period, with relatively deep clay loam, containing marl and marine fossils. Quite rich in limestone. The vines have an average age of more than 35 years.

Bright, fresh, peachy, flinty, and raring to go. Cool flavour, but good ripeness, brine and green olive, some savoury yoghourt sort of stuff in there too. Like this. Going glass to glass is effortless. 93 points. Gary Walsh, The Wine Front October 2019

2016 Louis Michel Chablis 1er Cru Montmain RRP $71
These Montmain vines were gradually replanted between 1983 and 1989. The four vineyards are spread along a clay hillside known to be sensitive to spring frosts, so they need extra attention at that time. Kimmeridgian left bank soils of hard limestone with a clay base. The soil is quite deep in some places, and the vines have an average age of 22 years.

A single parcel that has good balance between clay and limestone in the soil. Very rich peaches and mangoes on the nose with acacia and honeysuckle. Very attractive density with ripe mangoes and yellow peaches. Bold and fleshy. Drink now or hold. 91 points. Nick Stock, jamessuckling.com September 2018

2016 Louis Michel Chablis 1er Cru Butteaux Vieilles Vignes RRP $89
This parcel is located on the top of the slopes, with clay loam on the surface and plenty of limestone. Vertical roots plunge deep into the ground. The vines have an average age of 51 years.

The 2016 Chablis 1er Cru Butteaux Vieilles Vignes had only been bottled two weeks before I tasted it, but even in its reserved state it was showing very well, offering up aromas of green apple, white flowers, nutty reduction and iodine. On the palate, it’s medium to full-bodied, deep and concentrated, with good tension and structure. This is one 2016 that will have some upside potential. 91+ points. William Kelley, Wine Advocate September 2018

2016 Louis Michel Chablis 1er Cru Vaillons RRP $71
Same soils, vine age and winemaking as Séchets, which used to be blended into Vaillons. Now, this generally features parcels from the tiny climats of Chatains, Roncières and Mélinots.

One of the earliest plots to be harvested each year. This has attractive apricots and some hints of lemon butter. Smooth, fleshy and silky. A very elegant, smooth and drinkable style. A twist of herbs at the finish. Very drinkable now. 92 points. Nick Stock, jamessuckling.com September 2018

2016 Louis Michel Chablis 1er Cru Séchets RRP $80
From one of the domaine’s old parcels that used to be blended into Vaillons.  Kimmeridgian soils on the left bank. Hard limestone on a clay base, relatively deep soil with a browny red appearance. Vines with an average age of 30 years.

To my palate, the 2016 Chablis 1er Cru Séchets is the finest of Louis Michel’s premiers crus this year, unfurling in the glass with aromas of lemon oil, oatmeal, honeycomb and dried white flowers. On the palate, it’s medium to full-bodied, concentrated and textural, with superb cut and tension and a long, saline finish. It’s well worth seeking out. 93 points. William Kelley, Wine Advocate September 2018

2015 Louis Michel Chablis 1er Cru Séchets RRP $74
Honeysuckle and jasmine, oranges and lemon, a little star anise, and a suggestion of wet clay, but don’t mind me. It’s got a bit of weight and flavour, a succulence and gloss – a certain flamboyance – but pulls all sea shell and mineral, with the richness of honey lemon cut with herbs and flint. Good length, and so much drinking appeal and charm. Great now, for my tastes. 94 points. Gary Walsh, The Wine Front October 2017

2016 Louis Michel Chablis 1er Cru Montée de Tonnerre RRP $89 screw cap
375ml RRP $49
Located on the right bank of the river Serein – as with the grands crus – the Montée de Tonnerre is the most prestigious of all the Chablis premiers crus. The domaine grows fruit on a total of four hectares which were planted in 1974. The soil is Kimmeridgian from the right bank; it’s sticky and features marl with marine fossils, rich in limestone pebbles. Vines with an average age of 40 years.

This is a wine of power, energy and breadth, made from 3ha of vines in this fine right bank site just south of the grands crus. Like Michel’s village Chablis it’s still an infant, but you can sense its density and power quietly building like water behind a dam. Elemental, brooding notes reminiscent of plant sap and ground stone lurk in that resonant, aromatic inarticulacy, yet its mute force succeeds in seeming concentrated, close-grained and sheer in the mouth. 95 points. Andrew Jefford, Decanter Magazine June 2018

2016 Louis Michel Chablis 1er Cru Vaulorent RRP $89
Chablis’ Fourchaume vineyard is spread over 3km, with another small area in the valley where the grands crus are found. It is here, in the small enclave of Vaulorent, that Louis Michel has just under one acre of vines which the family planted in 1963. Relatively deep Kimmeridgian soils with limestone pebbles enclosed in clay-textured marl with marine fossils. Relatively deep soil.

A warmer site with higher clay content. This has an exotic array of tropical fruits with strong white peaches and a hint of praline. The palate rolls out smooth and fleshy fruit with a pithy, slightly grippy texture. Pastry and hints of orange marmalade to close. Drink or hold. 92 points. Nick Stock, jamessuckling.com September 2018

2016 Louis Michel Chablis Grand Cru Vaudésir RRP $155
Situated at the far end of the valley, Louis Michel’s parcel of Vaudésir was planted between 1955 and 1968, over five stages. Kimmeridgian soil of limestone pebbles embedded in clay-textured marl with marine fossils. Vines with an average age of 45 years.

2016 Louis Michel Chablis Grand Cru Grenouilles RRP $168
Located on top of the best-renowned hillside of the Chablis grands crus, and planted in 1958, Louis Michel’s parcel of 1.2 acres produces a complex and powerful wine. Kimmeridgian soils of limestone pebbles encased in clay-textured marl with marine fossils. Vines with an average age of 50 years.