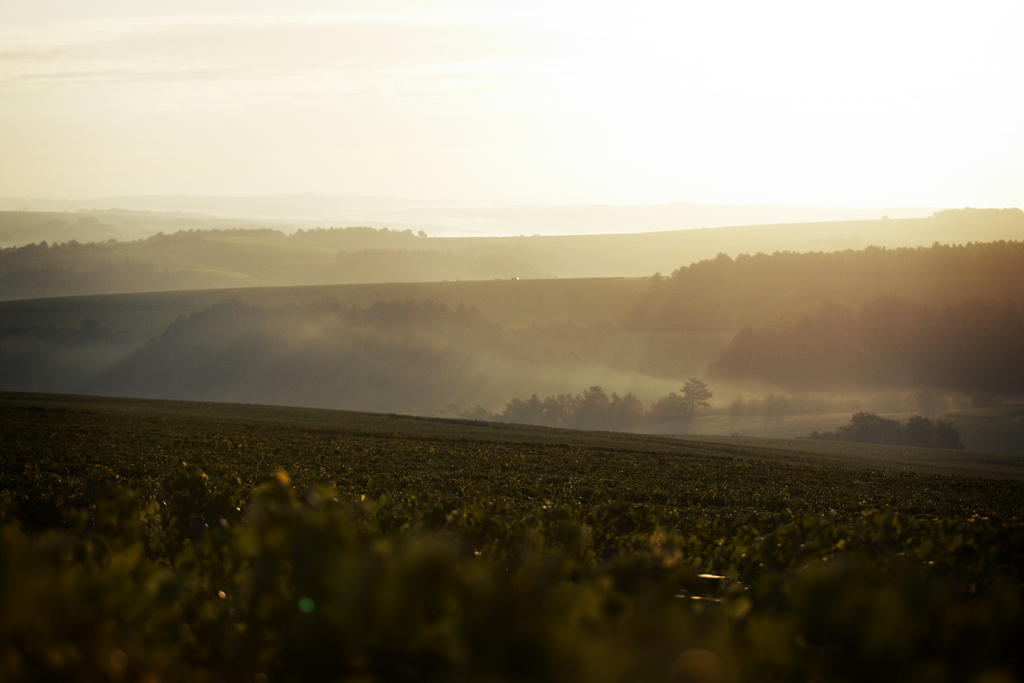 Things were set so well, before the hail came. Budbreak occured right at the start of April, just like in 2014. This month was also particularly fine and sunny, building hopes for an exceptional year. Ups and downs through spring and summer – May floods and a June heatwave – weren’t enough to prevent healthy fruit coming through, and when a nice dose of freshening rain came in mid-August, a great vintage was a whisker away.
We all know what happened next: On 1st September at around 1.30am, a catastrophic hailstorm lashed Chablis. The vines were devastated, and almost the entire domaine suffered.
This triggered a race against the clock, to get the harvest done as quickly as possible. Guillaume Gicqueau-Michel and the team dashed out on the morning of 3rd September, picking the worst-hit parcels first with all possible resources deployed. They then picked through the unaffected areas until 10th September.
This urgency paid off, with a harvest of fruit that hadn’t had the time to rot or dry out, in weather conditions that were cool and dry after the hail. The resulting wines are rich and ripe yet fresh, with good Chablis typicity. As well as another raft of excellent 2015 premiers and grands crus from this great domaine, we also present the Petit Chablis and Chablis from 2016.

2016 Louis Michel Chablis RRP $53 screwcap
375ml RRP $32
These vines are situated in the heart of the historic vineyard. The various soils date back to the Kimmeridgian period, with relatively deep clay loam, containing marl and marine fossils. Quite rich in limestone. The vines have an average age of more than 35 years.

It’s a juicy fruity thing, that’s for sure, almost veering into pineapple, but has that lovely stony feel through it along with fine acidity, and length to go. Some aniseed and floral notes play nicely, and that ripe lemon, zest and flinty crunch on the finish is most satisfying. Good glass of wine this. Delicious. Drinks well now. 92 points. Gary Walsh, The Wine Front October 2017

2015 Louis Michel Chablis 1er Cru Vaillons RRP $65
Same soils, vine age and winemaking as Séchets, which used to be blended into Vaillons. Now, this generally features parcels from the tiny climats of Chatains, Roncières and Mélinots.

Light-medium yellow. Reticent but pure aromas of white peach, apple, pear, citrus fruits and earth are lifted by a mineral quality and a touch of orange blossom. Lovely sweet peach and mandarin orange flavors display nice concentration. Winemaker Guillaume Gicqueau-Michel thinks this should be more expressive today, but this is the only premier cru bottled with Diam corks. Gicqueau-Michel told me he’s moving back to natural cork, as he finds that the wines sealed with Diams are muted for too long. Lovely fruit here. 90 points. Stephen Tanzer, Vinous Media August 2017

A more elegant if less concentrated nose speaks of citrus, white flower, sea breeze and a hint of mineral reduction. The sleek, detailed and energetic flavors are also more refined if notably less dense, all wrapped in a mineral-inflected finish that isn’t especially dry or complex. Note that this forward effort should drink well young. 88-90 points. Allen Meadows, Burghound October 2016 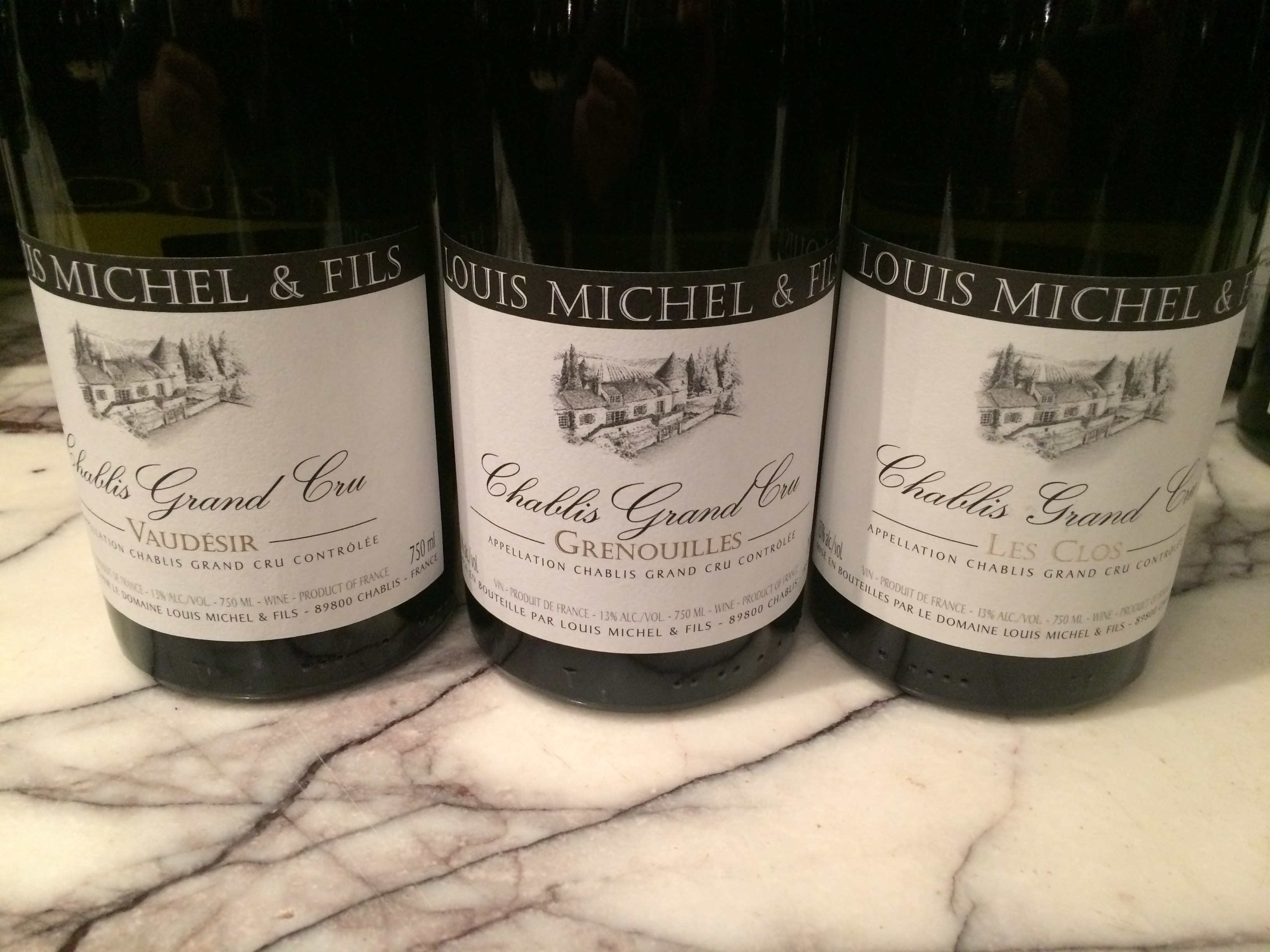 2015 Louis Michel Chablis 1er Cru Montmain RRP $65
These Montmain vines were gradually replanted between 1983 and 1989. The four vineyards are spread along a clay hillside known to be sensitive to spring frosts, so they need extra attention at that time. Kimmeridgian left bank soils of hard limestone with a clay base. The soil is quite deep in some places, and the vines have an average age of 22 years.

Pretty wine, with a little fennel and sea spray over lemon and nashi pear. Light and fresh, flinty too, but with a pleasing amount of white fruit and lemon pith, some lime tang, and a chalky finish of good length. You can see why they used to call Hunter Semillon ‘Chablis’, not least when it had a few years on it to relax: the similarities are clear here. Beautiful drink. The sort of wine where you look about, anxious for a refill. 93 points. Gary Walsh, The Wine Front October 2017

This is even more floral with discreet notes of spice on the pear and oyster shell-infused nose that leads to delicious and notably finer middle weight flavors that possess good concentration and much better depth on the lingering finish that is not particularly dry. 88-91 points. Allen Meadows, Burghound October 2016

An appealingly fresh and rich nose offers up notes of various citrus scents that are liberally laced with apple, tidal pool and shell fish nuances. The mouth feel of the medium-bodied flavors is less fine but more muscular with plenty of punch on the stony finish that is drier but a bit less complex. 88-91 points. Allen Meadows, Burghound October 2016

2015 Louis Michel Chablis 1er Cru Séchets RRP $74
From one of the domaine’s old parcels that used to be blended into Vaillons.  Kimmeridgian soils on the left bank. Hard limestone on a clay base, relatively deep soil with a browny red appearance. Vines with an average age of 30 years.

Honeysuckle and jasmine, oranges and lemon, a little star anise, and a suggestion of wet clay, but don’t mind me. It’s got a bit of weight and flavour, a succulence and gloss – a certain flamboyance – but pulls all sea shell and mineral, with the richness of honey lemon cut with herbs and flint. Good length, and so much drinking appeal and charm. Great now, for my tastes. 94 points. Gary Walsh, The Wine Front October 2017

2015 Louis Michel Chablis 1er Cru Vaulorent RRP $81
Chablis’ Fourchaume vineyard is spread over 3km, with another small area in the valley where the grands crus are found. It is here, in the small enclave of Vaulorent, that Louis Michel has just under one acre of vines which the family planted in 1963. Relatively deep Kimmeridgian soils with limestone pebbles enclosed in clay-textured marl with marine fossils. Relatively deep soil.

This is both riper and more floral with a mix of white orchard fruit and citrus elements. There is a succulent and very round quality to the delicious and attractively textured flavors that exude a discernible minerality on the slightly more complex, drier and longer finale. 89-92 points. Allen Meadows, Burghound October 2016

2015 Louis Michel Chablis 1er Cru Montée de Tonnerre RRP $81 screwcap
MAGNUM RRP $181
375ml RRP $49
Located on the right bank of the river Serein – as with the grands crus – the Montée de Tonnerre is the most prestigious  of all the Chablis premiers crus. The domaine grows fruit on a total of four hectares which were planted in 1974. The soil is Kimmeridgian from the right bank; it’s sticky and features marl with marine fossils, rich in limestone pebbles. Vines with an average age of 40 years.

Distinct smell of pastis along with rockpools and sea shells, nectarine and ripe lemon. It’s full-flavoured, yet discreet, marrying flint to a subtle glycerol texture. There’s crunch and vivacity, complexity and satisfaction at every sip along the way, and a tight almost chalky finish of excellent length and carry. Wonderful. 95 points. Gary Walsh, The Wine Front October 2017

Exotic yet discreet scents of apple and fresh herbs, plus a faint lactic note. More open in the mouth than the Vaulorent; in fact, already generous even if its fruit tones are muted in the early going. Chewy, flinty, minerally wine with building pear fruit. Finishes with sneaky rising length. Doesn’t show the normal austerity of this elite premier cru and yet this wine comes across as only moderately ripe. In fact, the estate had originally planned to pick this fruit on September 7 but had to bring it in quickly after the hailstorm. 90 points. Stephen Tanzer, Vinous Media August 2017

A pretty and distinctly ripe nose combines notes of white flower, pear, apple and quinine. The refined, pure and reasonably well-detailed medium weight flavors possess good richness and density while delivering reasonably good length on the moderately dry and lemon-inflected finale. This is presently not particularly complex but the underlying material appears to be such that more will almost certainly develop with a few years of bottle age. . 89-92 points. Allen Meadows, Burghound October 2016

Ripe apple with a lovely pithy skin character – much more depth on the palate than their Fôret. Chewy and textural – excellent. 17/20 Richard Hemming MW, jancisrobinson.com January 2017

2015 Louis Michel Chablis Grand Cru Vaudésir RRP $140
Situated at the far end of the valley, Louis Michel’s parcel of Vaudésir was planted between 1955 and 1968, over five stages. Kimmeridgian soil of limestone pebbles embedded in clay-textured marl with marine fossils. Vines with an average age of 45 years.

2015 Louis Michel Chablis Grand Cru Grenouilles RRP $163
Located on top of the most best-renowned hillside of the Chablis grands crus, and planted in 1958, Louis Michel’s parcel of 1.2 acres produces a complex and powerful wine. Kimmeridgian soils of limestone pebbles encased in clay-textured marl with marine fossils. Vines with an average age of 50 years.

2015 Louis Michel Chablis Grand Cru Les Clos RRP $163
Located halfway up the hillside, in the heart of the vineyard, Louis Michel’s 1.2-acre parcel is split into two: one half was planted in 1967 and the other half was replanted in 2000. Kimmeridgian soil of Limestone pebbles encased in a clay texture, marl with oyster fossils. Relatively deep soil with plenty of limestone on a very steep slope. Vines with an average age of 40 years.

Light-medium yellow. Pure, inviting aromas of white peach, apple, lime zest, white flowers and white pepper. Juicy but reticent in the mouth, with its concentrated white peach, citrus and floral flavors accented by mint and salty minerality. Finishes pure and long, with a captivating light touch. According to Guillaume Gicqueau-Michel, there was no hail damage here as the estate’s vines are situated in the western half of Les Clos, which was mostly unaffected. This fruit was picked on September 6, which had been the forecasted harvest date even before the big storm hit. 93 points. Stephen Tanzer, Vinous Media August 2017