It wasn’t pomp and ceremony that announced the first release of Onannon’s single-site wines last year.
No posturing, hype or hubbub.
It was more purring energy that signalled the take-off of these two.
“Length and drive. Class,” was Mike Bennie’s conclusion with the Red Hill wine from the Mornington Peninsula. “Exquisitely tuned,” enthused Jane Faulkner. “Sapid with shapely, raw silk tannins.”
And the expression from Leongatha in Gippsland had Campbell Mattinson feeling the groove and evoking it in a rhythmical, almost poetic, fashion. “Gorgeous Pinot Noir. Strength of purpose,” he riffed. “It’s a wine with an urge to it, an irresistible momentum… sparks fly around a tightly-drawn fuse.”
And sparks will fly again as we release the follow-ups from the rightly recognised ’17 harvest in southern Victoria.
These are joined by the follow-up to what Gary Walsh declared “Smoking Chardonnay… Finesse and power… Magnificent.”
Yep, seems like everyone’s raving on about Onannon. These three gifted and hugely likeable young men are not the types to make a big song and dance about themselves.
But with these insistent, mellifluous wines – and everyone else singing their praises – why would they? 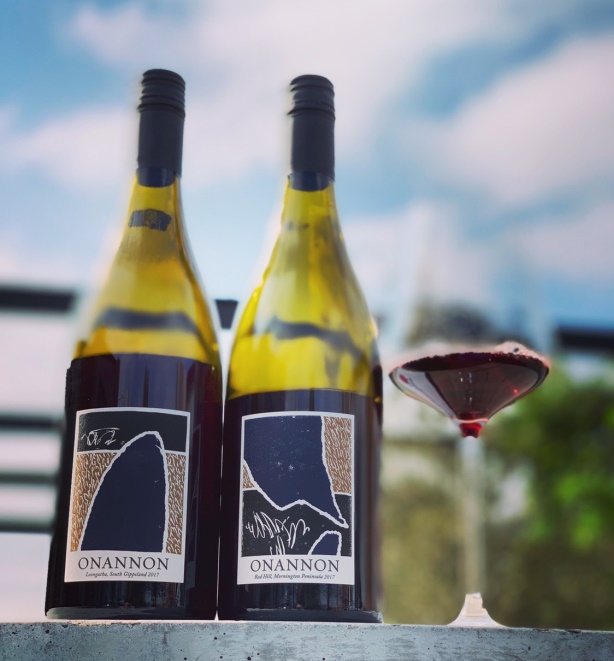 2017 Onannon Pinot Gris Mornington Peninsula RRP $32
Handpicked from Onannon’s vineyard in Red Hill. Pressed immediately and given a few hours’ hang time before a final squeeze to get some grip. Settled overnight. The juice is racked straight to old barrels with some solids. A combination of wild and inoculated yeasts is used. Once ferment has finished, the lees are stirred a few times before sulphur is added to prevent MLF. It’s then basically left alone until filtration and bottling.
The 2017 has more volume in all aspects than the previous releases. A tint of bronze from some skin contact. Quince and pear on the nose, lots of spice too: musk and lavender. The palate really attacks; it’s a mouthful of flavour: lychee, mirabelle plum and camomile. It seems a little denser, but has good tension too. – Will Byron, Onannon

2018 Onannon Chardonnay Mornington PeninsulaRRP $39
100% 95 clone Chardonnay from a single site in Tuerong. Fruit is crushed into the press. After pressing it’s settled overnight and then racked to barrel. We played around with different levels of solids. A combination of yeasts was used to help build some complexity. No MLF. 20% new French oak, 10 months in barrel. – Will Byron, Onannon

2016 Onannon Gippsland Pinot Noir RRP $43
This is a blend of two vineyards, one from South Gippsland the other from East Gippsland. 100% destemmed, 15% new French oak. Beetroot leaf, Cunliffe & Waters Christmas cherries, shiitake mushroom with a whiff of petrichor. Delicate entry, sour red fruits, some pomegranate and Asian spices. Builds some sweeter red fruits and then finishes with a savoury grip. – Will Byron, Onannon

Pale garnet with a lithe profile and restrained style barely medium-bodied but the tannins are so fine with crisp acidity, sweet-spicy cherries and plums with a hint of eucalypt. 94 points. Jane Faulkner, Halliday Wine Companion 2018 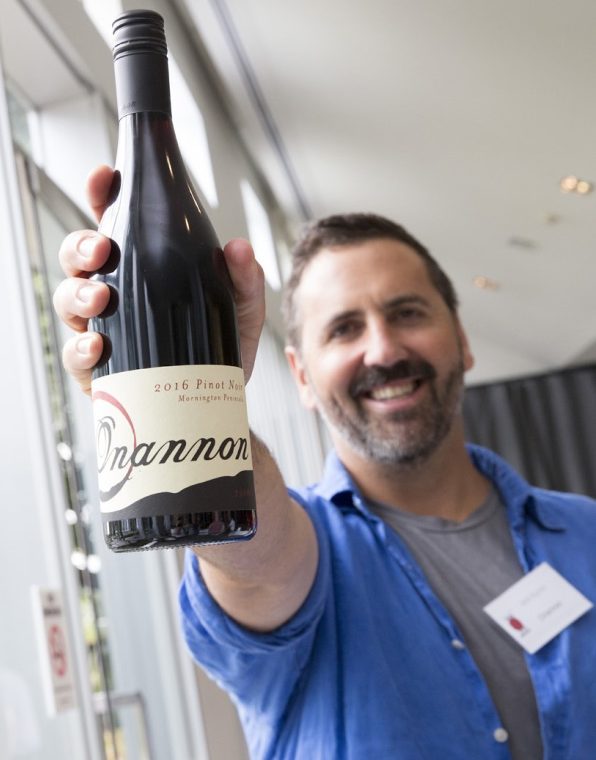 2016 Onannon Mornington Peninsula Pinot Noir RRP $39
This wine is a blend of three vineyards: our original Red Hill site (23-year-old vines, MV6 and 777 clones), plus a site in Shoreham (19-year-old vines, MV6) and a site in Merricks North (20-year-old, MV6). All fruit was handpicked and then transported back to the winery where it sat in a cool room overnight. We used all the 777 and some of the MV6 clone from our Red Hill site as the whole-bunch portion. The whole bunch barrels are not blended until we assess the possibility of a standalone wine, which we did for the first time in 2016. All the remaining fruit was de-stemmed and cool-soaked for 4-5 days until spontaneous fermentation took place. The primary fermentation took between 5 and 8 days, after which both ferments had one week post-fermentation maceration. Natural malolactic conversion finished within 12 weeks, after which time the wine was racked and sulphured. We bottled the wine in late December. – Will Byron, Onannon

From the moment the fragrance of wild strawberries, spiced black cherries and warm earth hits, you’ll swoon. This has all the plushness, ripe tannins and structure typical of the region, fuller bodied but far from heavy as it has beautiful composure. 95 points. Jane Faulkner, Halliday Wine Companion 2018

2017 Onannon Single Site Leongatha Pinot Noir RRP $62
The vineyard is close-planted and dry-grown. The Onannon boys use the 1990-planted D5V12 and MV6 clones, plus the younger 777 vines. Fruit 100% destemmed into separate fermenters with minimal SO2, then cold soaked for six days before natural fermentation kicked off. The wine was kept on skins for an extra two weeks to build and complex the tannins. Once pressed, it was settled overnight before being racked to barrels (30% new) to sit on gross lees and undergo natural malolactic conversion. Bottled unfined and unfiltered April 2018.

2017 Onannon Single Site Red Hill Pinot Noir  RP $62
This wine is from the Red Hill vineyard which the Onannon boys manage with the help of  their trusty vineyard worker, Martin. The vines are 24 years old now. It’s a warm site, sitting at 90m with a northern exposure. Onannon used both the clones that the vineyard is planted to: MV6 and 777, with the blend a 50:50 split between the two. 50% whole clusters in the ferment. Natural malolactic conversion in barrel (25% new oak). The wine was bottled unfined and unfiltered in April 2018.

Savoury detail is good in this wine, char and earth, brambles and sour cherry, pepper and clove. Lots of character and detail in drinking. Fine swish of tannins a feature, as is the amaro-like tang to acidity. Like this. Kinda funky, kinda neat, very drinkable. 93 points. Mike Bennie, The Wine Front April 2019 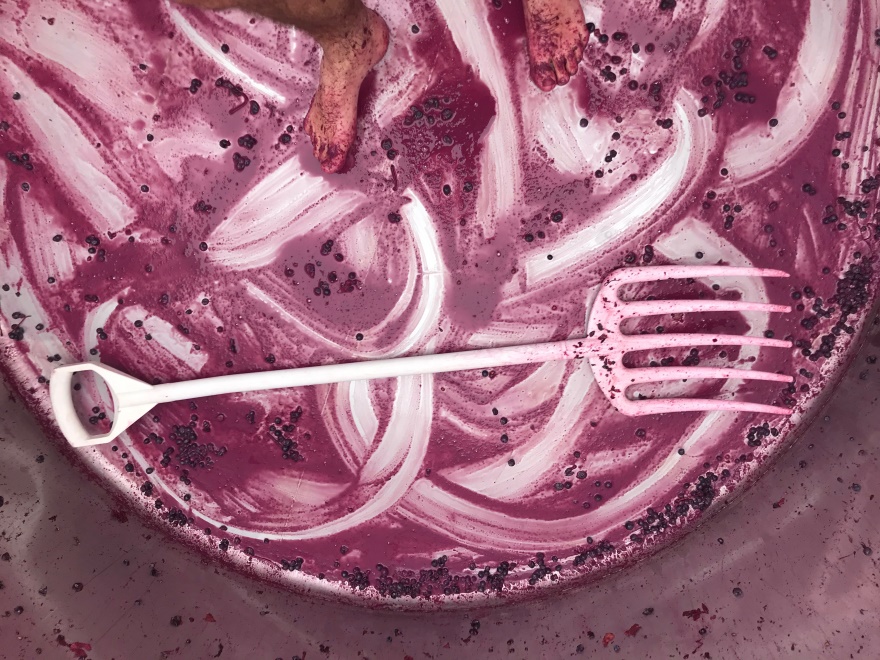