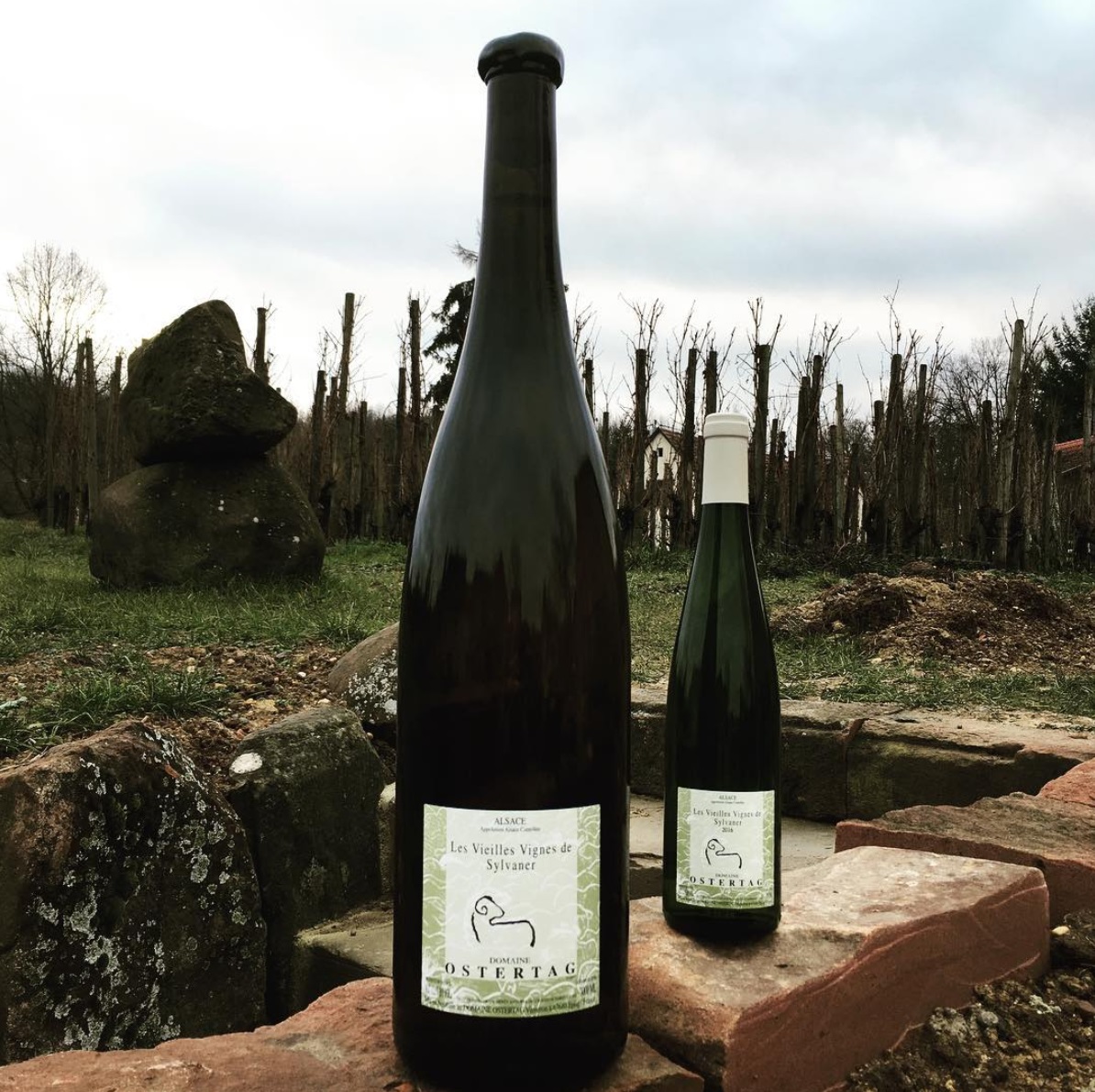 Biodynamically farmed for 22 years now, Domaine Ostertag is one of those places whose virtues are so simple, strong and enduring that you kind of forget to mention them. Conviction and constancy hold sway in the family’s farming. They follow the season, follow the vine, follow nature – and thus the spirit and the vital wines flow.
We’re due a recap on what this looks like. With André taking a step back to heal from Parkinson’s – a disease that’s afflicted him for more than 10 years – son and co-owner Arthur Ostertag is at the helm. You may remember how André warned us when handing over of the reins: “Prepare to be surprised by this new wave blossoming at the domaine with contagious energy!”
So then, those virtues we spoke of. Organic viticulture here is adapted to each plot’s individual nature – and if you read the notes on the entry-level “Jardins” wines, you can see what André means. He speaks of “respect of the life in and around the vineyards in a constructive collaboration with nature”. Also in the vineyard, the team has reintroduced horse ploughing in steep and close-planted vineyards, and among young vines. Picking and sorting are, naturally, done exclusively by hand.
In the cellar, whole clusters are pressed slowly and with infinite care. It’s gentle winemaking, respectful of the wine’s natural cycles. This is followed by long fermentations with indigenous yeasts and long lees ageing. The wines are dry, except the Gewurztraminers and dessert bottlings. Stainless steel is used for the aromatic varieties (Riesling, Sylvaner, Gewurztraminer and Muscat), and a minor part is played by concrete egg and stoneware jars. Barriques (228-litre capacity) are used for the Pinots. Unusually for Alsace – and because André feels the varieties need help building presence and character – Pinot Blanc and Gris undergo full fermentation and ageing in oak.
This is one of Europe’s superstar domaines. One like no other. We hope you continue to discover and share the unique charms of Ostertag père et fils.

2017 Ostertag Sylvaner Vieilles Vignes RRP $46
Sylvaner is a grape originating from central Europe, taking its name from the region of Transylvania. It can also be found in Germany’s Franconia, and Alsace which is the western limit of its growing area.
Sylvaner is a cornerstone of Alsatian food and wine culture. Our cuisine is based on white wine as one of the main ingredients, Sylvaner in most cases, which is used for marinades (Baeckeofe) or cooking sauces (Choucroute). It has long been the everyday wine: in my family Sylvaner is drunk during lunch and dinner as well as during the snack in the vineyard or after a day of work to quench thirst.
Sylvaner has been planted to up to one-third of the whole production in Alsace, and just 6% today as it is facing a big decline to the advantage of Pinot Noir and Riesling, and even more Auxerrois or Chardonnay that are planted all over the flat fertile areas to produce sparkling wines.
At its peak it was totally neglected from the cultural aspect (very rustic and regular yields), as well as the oenological aspect (quick and technological winemaking) and commercially (sold by the litre in train stations).
But things are starting to change. It’s been seeing a discreet revival for a few years, being accepted on a Grand Cru (Zotzenberg), finding new interest from producers in “historical” Sylvaner sites, and fitting perfectly the trendy low-alcohol, easy-drinking category.
Domaine Ostertag’s Sylvaner vines have an average age of 55 years, and have been farmed with biodynamic methods since 1998, like the whole vineyard. The vines were planted between 30 and 80 years ago. Half the plots are located in top single-vineyard sites, and have a deeply established root system which brings a surprisingly rich mineral structure for this variety which has the reputation of being quite dilute.
This wine comprises 10 small plots in total, located in Epfig and Nothalten, with 5 natures of soils: sandstone, clay, marl, granite and alluvium. The 2017 was picked on 11th and 18th September. It was gently pressed as whole bunches, in a pneumatic press, for nine hours. It fermented naturally in stainless steel and was kept for one year on its lees. It was bottled late August 2018 with a balance of 12.5% alcohol and 3g/L of residual sugar. – André Ostertag

2018 Ostertag Pinot Blanc Les Jardins RRP $43
Pinot Blanc Les Jardins is a blend of six small gardens of vines, farmed biodynamically, and located in the town of Epfig with a small part coming from the Clos Mathis parcel in Ribeauvillé. Half the plots are true Pinot Blanc, the other half is Auxerrois which comes, for the most part, from the slopes of lieu-dit Fronholz. They are based on three “natures” of soil: clay-silt, marl-sandstone, and a touch of granite.
The 2018 vintage was hand-picked on 10th and 11th September. It was gently pressed as whole bunches,  in a pneumatic press, for about nine hours. It fermented in used oak barriques with natural yeasts, and went through malolactic fermentation. It was kept in the same barrels for nine months, and bottled in May 2019 with a balance of 12.5% alcohol and 4g/L residual sugar.
It’s an uncommonly full-bodied and structured Pinot Blanc, bone-dry and mouthwatering. It exudes fresh and fruity aromas of yellow peaches and nectarine. A hint of hazelnut comes out with air. The mouth is thick yet tense by a zesty minerality. – André Ostertag

2017 Ostertag Pinot Gris Les Jardins RRP $64
The Pinot Gris Les Jardins is a blend of four small “gardens” of vines, farmed biodynamically, and located in the towns of Epfig, Itterswiller and Albé. These plots are based on three distinct natures of soil: Clayey sandstone (50%), loess (15%), and schist (35%). A small part of the lieu-dit Zellberg’s youngest plot – on clay-limestone-sandstone soil – was also blended into this cuvée in 2017.
Ostertag has been making Pinot Gris its own way since 1984, using 228-litre Burgundy oak casks for fermentation and ageing, and taking it to a fully dry balance which is even now pretty unusual in Alsace. The 2017 vintage was hand-picked on 13th September (29th September for the Albé plot). It was gently pressed as whole bunches, in a pneumatic press, for about nine hours. It fermented with natural yeasts in used 228-litre barrels, and went through malolactic conversion. It was kept in the same barrels for 11 months, and bottled early September 2018.
This a fresh and intense Pinot Gris, with a refined floral and slightly smoky nose, and ripe yellow fruits, citrus fruits and honey. In the mouth the complexity of the soils and the barrel ferment is felt through its full body and vibrant, refreshing personality with an intense mineral structure. – André Ostertag

2017 Ostertag Clos Mathis Riesling RRP $81
The Clos Mathis belongs to Ostertag’s long-time, freshly retired vineyard manager, Hubert Mathis. This remarkable 0.6-hectare vineyard surrounded by stone walls is located in Ribeauvillé, in line with the grand crus Geisberg and Kirchberg. The soil is composed of a granitic mother rock and gneiss, with poor fertility. The vines are grown on terraces, on a very steep south-east facing slope which benefits from hot days and cool nights. The heat is tempered by cool winds coming down at night from the valley that ends just after the vineyard. This particular location allows slow ripening, preserving acidity and finesse in Riesling.
Hubert Mathis inherited this plot from his parents. He has entirely rebuilt it and was initially selling the grapes to a local merchant, until 1997 when he and André decided to reveal this very beautiful historic vineyard which has been esteemed sincethe Middle Ages and the time of the Seigneurs de Ribeaupierre.
The 1997, 1998 and 1999 vintages were dedicated at working on the soils and starting to farm the clos biodynamically, in order to reveal the soul of this beautiful terroir. The first vintage as part of the single-vineyard range of the domaine, under the Clos Mathis label, was 2000.
Clos Mathis gives birth to classic, distinguished, long-lived Rieslings. Some aspects can make it seem austere in its youth, the structural elements (acidity, mineral tannins) in the foreground while textural and aromatic elements are rather timid, but with time the Clos Mathis becomes a sappy, classically dry wine in the breed of greatest Alsatian Rieslings.
The 2017 vintage was hand-picked on 29th October. It was gently pressed with the whole bunches, in a pneumatic press, for about nine hours. It naturally fermented in stainless steel, and kept on lees for one year. It was bottled in early September 2018 with a balance of 13.5% alcohol and 2g/L residual sugar. – André Ostertag

2017 Ostertag Muenchberg Grand Cru Riesling RRP $124
Muenchberg means the “mountain of the monks” and was first planted in the 12th century by the Cistercian monks. We own 2.05Ha of which 1.65Ha are planted with Riesling. Muenchberg is one of the most unique grands crus of Alsace because of its very particular soil of red sandstone and volcanic sediments. It’s a wonderful south-facing amphitheatre of vines in a closed valley, in the Vosges foothills, protected to the west by the 901m Ungersberg peak. The altitude ranges between 250 and 300m which prevents excessive heat and helps to keep complexity in the wines. Like all the domaine’s vineyard the Riesling vines are farmed using biodynamic principles, and certified organic. We pay particular attention to manual tasks on the vines, because machines may be sometimes necessary but they will never have “man’s hand’s intelligent sensitivity”. – André Ostertag

This promises some really spicy peaches and apricots, though held in in reserve for now. Some wonderful citrus and flinty accents come through. Medium-bodied, but very minerally indeed; this is like licking white stones. The centre palate is ever so precise and the finish is long and complex. Drink or hold. 95 points. Nick Stock, JamesSuckling.com August 2019

This beautiful south-facing amphitheatre has been planted since the 12th century. André Ostertag’s 1.65ha are vinified to produce a wine blending intensity and elegance, the Riesling’s tension expressed with great purity that will reward the patient. 94 points. Stephen Spurrier, Decanter Magazine October 2019

2016 Ostertag Riesling Grand Cru Muenchberg RRP $107
Very youthful, subtle and delicate, this has grace and complexity. The finish is super mineral and really polished. Better from 2019, but probably has another 20 years of aging potential. Made from biodynamically grown grapes and Demeter certified. 96 points. Stuart Pigott, JamesSuckling.com May 2018

From vines ranging from 30 to 75+ years old and planted on red sandstone and volcanic sediments, Ostertag’s 2016 Grand Cru Muenchberg Riesling is intense and concentrated on the deep, clear and elegant nose, with perfectly ripe (mirabelle) fruit aromas that are perfectly mixed with the spicy-warm terroir notes. Round, juicy, very compact and tensioned but highly elegant and deep on the palate, the 2016 reveals great density and complexity and indicates lots of mysteries that will be revealed over the years in the bottle or with more aeration. A fascinating Muenchberg, it is intense and dense but highly finessed and with lingering salinity. 95 points. Stephan Reinhardt, Wine Advocate November 2018