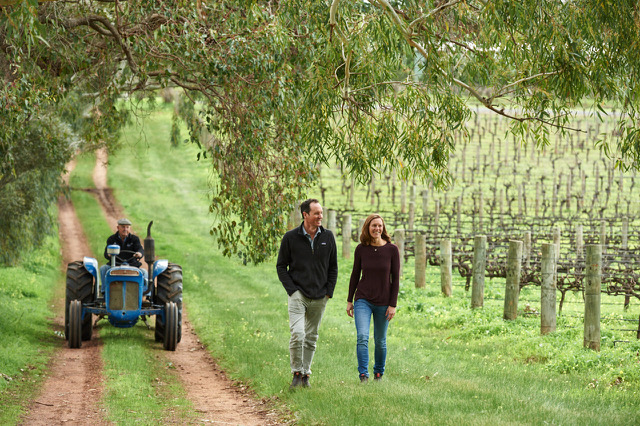 Corymbia is the deep-rooted, far-sighted vision of husband-and wife-team, Rob and Genevieve Mann. The Mann name is synonymous with Western Australia’s Swan Valley, where Rob’s pioneering grandfather Jack worked a remarkable 51 consecutive vintages for Houghton. Rob was just a boy when he joined his father – former Australian test cricketer Tony – in planting the vines on what is now the dry-grown, organically farmed Corymbia vineyard.
Rob was one of the crop of hotshots at Hardys during the reign of Stephen Pannell, before Rob himself took the mantle of senior winemaker at Hardys Tintara. From there he established a name for himself as one of the great talents of his generation during his time at the helm of Cape Mentelle. Genevieve, meanwhile, worked in South Africa, France, California and South Australia prior to moving to Margaret River in 2007 in the role of winemaker for Howard Park.
The two of them kicked off their homecoming dream, Corymbia, with the 2013 vintage, during Rob’s tenure as estate director at Newton Vineyards in Napa Valley. Now firmly ensconced back in the Swan Valley, Rob and Gen’s Chenin Blanc and Tempranillo-dominant red blend sit at the heart of a bright future for this brilliant duo.

2018 Corymbia Chenin Blanc RRP $32
Organically, dry-grown fruit from vines planted more than 25 years ago on the Houghton loam soils of what was an old currant vineyard. The grapes were harvested by hand on 31st January 2018, 5th February 2018 and 6th February 2018, and then whole bunch-pressed prior to natural fermentation. A portion was matured in seasoned French oak barriques for four months prior to blending and bottling. Alcohol: 12.5%; pH 3.23; total acidity 6.73g/L; RS 0g/L. The wine shows distinctive characters of beeswax, beurre bosc pear and oyster shell with a long, vibrant, saline finish.

69% Tempranillo, 19% Malbec and 12% Cabernet Sauvignon. Swan Valley vs Spain here, and a damned tasty thing it is too. I’m thinking plum and dark cherries, spice, subtle vanilla perfume, coffee beans and earth. Medium-bodied, wide-grained ripe but sandy skinsy tannin, fleshy mid-palate action, even acidity, cola nut, more to red fruits to taste, grip and savoury appeal on a solid finish. I seem to be stuck on 93 points (a good score!) for this wine, yet I’m tempted to push it up a little this year. Anyway, it’s well worth seeking out. 93 points. Gary Walsh, The Wine Front