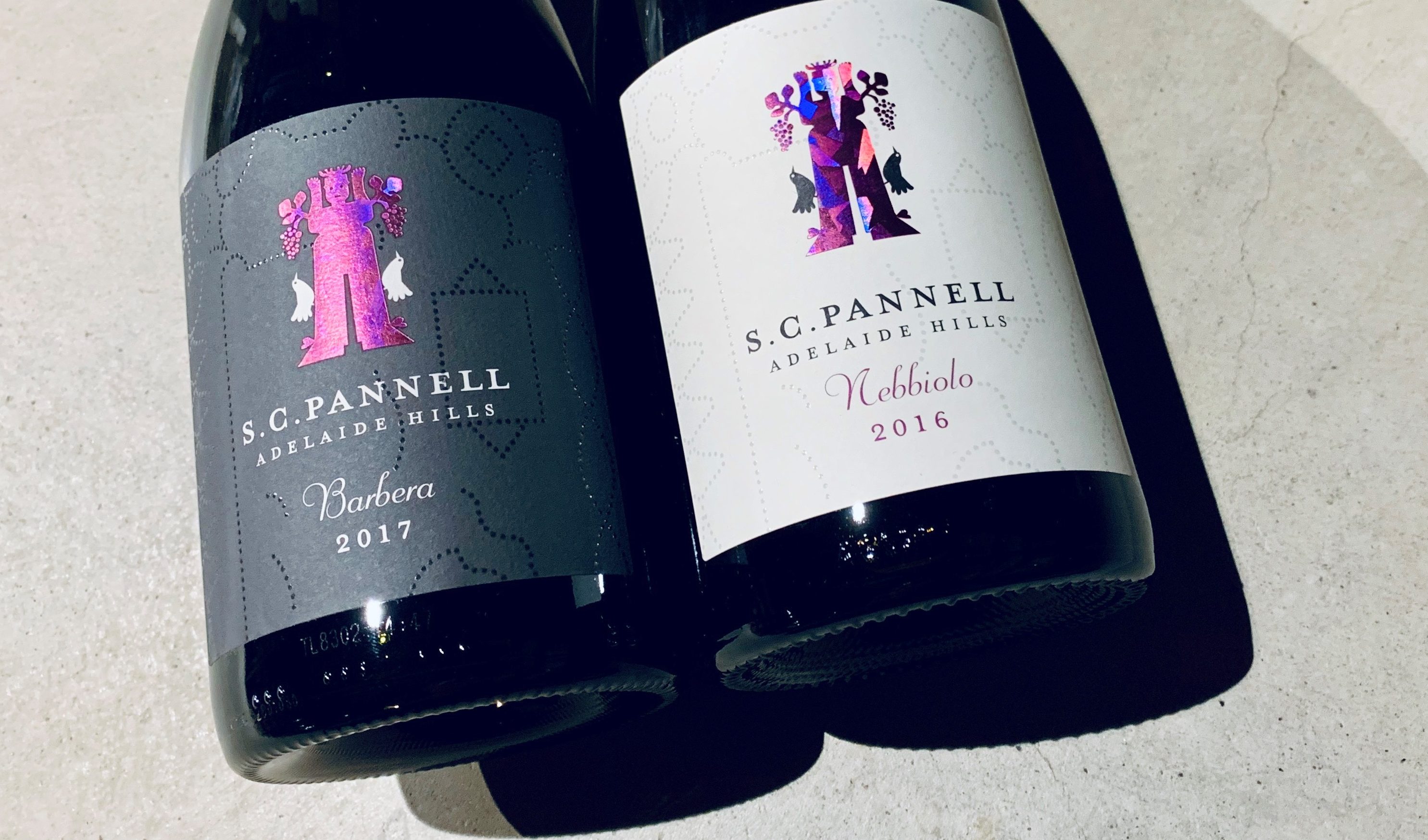 Nebbiolo may be very “now” in Australia but this variety Stephen Pannell calls “vinous heroin” has been in his – err, veins – for years. He’s worked vintages with his great friends at G.D. Vajra, and is now releasing his eighth Nebbiolo under the S.C. Pannell label. The style he goes for takes a solid cue from traditional Barolo, with extended maceration on skins before the decision to press is taken purely on taste. This gives a very different tannin profile, winding them to the back palate so the pure and naturally complex fruit is allowed to unfurl seductively through the mouth.
The 2016 S.C. Pannell Nebbiolo release coincides with another perennial Piedmont-inspired fave: Barbera. “My obsession with Piedmont continues with the much underrated and underappreciated Barbera,” says Steve. “Naturally less tannic than its regal cousin Nebbiolo, but high acidity and deep colour makes it a similarly cellar-worthy wine.” Once again, it’s good old Gumeracha providing the grapes, and it’s another mouthwatering proposition, bursting with fruit and supporting structure.
The Italianate triumvirate is rounded out by Steve’s cheekily named Nero Diavola. Made from en vogue Sicilian variety Nero d’Avola, and poking fun at the stoush over Australia’s use of the native name, this one comes from S.C. Pannell’s home on Olivers Road in McLaren Vale. It’s devilishly drinkable with suede tannins woven through trademark black cherry, dried herbs, earthy spices and chocolate.

2018 S.C Pannell Nero Diavola RRP $28
Simply stated, 2018 was a solid year. A vintage without extremes that was kind to both winemakers and vines alike. The fruit had lovely freshness and vivacity, the crops were of an average size and there was consistency throughout despite the dryness of the soil. Even the winemakers seemed to be enjoying themselves!
This Nero d’Avola is a modern evolution of Sicily’s most famous vinous export. It’s an early-flowering, late-ripening variety that tolerates heat without dropping acidity, making it a perfect match for our dry region near the sea. This is 100% Nero d’Avola from Olivers Road in McLaren Vale. The grapes were hand-picked in mid-March and traditionally vinified in a small open-top fermenter for 10 days. The wine was gently pressed and sent immediately to a 4300-litre French oak vat for malolactic fermentation, racked and returned to vat for a further seven months before bottling in February 2019.
The nose shows aromas of black cherry, dried herbs, incense and terracotta tile leading onto a palate of dark chocolate, plum, beetroot and signature cherry. Structurally it’s a bit of a devil: Deceptive yet charming with seductive tannins that are suede-like and complement the Italian herb-garden finish. – Stephen Pannell

2017 S.C. Pannell Barbera RRP $39
My obsession with Piedmont continues with the much underrated and underappreciated Barbera. It’s naturally less tannic than its regal cousin Nebbiolo but high acidity and deep colour make it a similarly cellar-worthy wine.
This is 100% Barbera from a single vineyard in Gumeracha, at the northern end of the Adelaide Hills. The fruit was hand-harvested, crushed and traditionally vinified in small open-top fermenters. It was left on skins for 13 days before being pressed and sent to French oak puncheons, of which 30% were new. It spent 14 months in oak before bottling.
The wine is full of life and goodness with dark cherries in kirsch, boysenberry, mulberry, hazelnut, walnut bread, vanilla and smoky paprika. There’s a delightful zeal to the berry-freshness on the finish. From a structural point of view, it’s medium bodied with typical varietal acidity that drives the flavour and expands the finish. The tannins are there but provide a frame for the acid and flavour, rather than standing out as the main event. – Stephen Pannell

The eighth release of our S.C. Pannell Nebbiolo – a blend of five different clones from a certified-biodynamic Gumeracha vineyard in the Adelaide Hills. The grapes were hand-harvested in late March and traditionally vinified in small open-top fermenters. The wine was gently pressed off skins after 23 days, followed by the completion of malolactic fermentation in stainless steel. It was then transferred to old Hungarian oak puncheons and large vats for 14 months.
The wine is highly perfumed with notes of red cherry, rosewater, fennel bulb, cassis, chestnut purée and marjoram along with echoes of terracotta tiles and cedar. It’s medium-bodied and flavoursome. Unashamedly tannic with an almost unrivalled balance of acid and flavour, perfect weight and a tremendously long finish. – Stephen Pannell

OTHER SCATTERED GEMS FROM S.C. PANNELL…

2016 S.C. Pannell Adelaide Hills Syrah RRP $39
Sourced from a vineyard in Echunga, 410 metres above sea level. Since 2010 Steve has worked with this vineyard that won him the Jimmy Watson Trophy in 2014. The fruit is grown on well-drained, granitic soil, Steve’s preference for Syrah.
Hand-harvested and vinified in small open-top fermenters with 30% whole bunches. A total of 17 days on skins before being sent to predominately old, large French-oak vats for 10 months.

The purity of fruit is impressive to say the least. The blue fruits just keep on coming with notes of brambleberries, dark cherries, dark plums, pressed violets, acai berries, elderberries. Citrus, nutmeg, liquorice, dark chocolate and charcoal follow. Very tight and chewy on the palate, which is so structured and fine-tuned. Full body, grainy and encompassing tannins and a long, steely finish. Edgy and silky at the same time. Drink in 2028. 95 points. Nick Stock, jamessuckling.com August 2018

2017 S.C. Pannell Cabernet Malbec RRP $52
This is the follow-up to the wine that cleaned up at last year’s McLaren Vale Wine Show, winning Steve the title of Bushing King once more for Best Wine in Show. The idea of a Cabernet blend was born of chance when owners of a neighbouring vineyard on Amery Road discovered that Malbec had been planted not Merlot as thought. It was a fortuitous mistake that allowed me to create an homage to dear friends and a favourite producer, Wendouree – and, in particular, their blends.
This blend is 60% Cabernet Sauvignon and 40% Malbec from two vineyards at the end of Amery Road in McLaren Vale. The Cabernet vines are more than 70 years old and the Malbec vines are 26 years old.
Both varieties were picked on 26th March and vinified separately in open-top fermenters, spending 12 days on skins. The wines were blended immediately post fermentation and sent to French oak puncheons, of which 30% were new. Bottled in September 2018.
The nose shows signature cassis with a poke of redcurrant followed by black fruits and floral notes, black tea, split red wood and mahogany. The palate is medium bodied, calm and composed with a seductive glide to the pallet carrying a tide of flavour. Harmonious. – Stephen Pannell