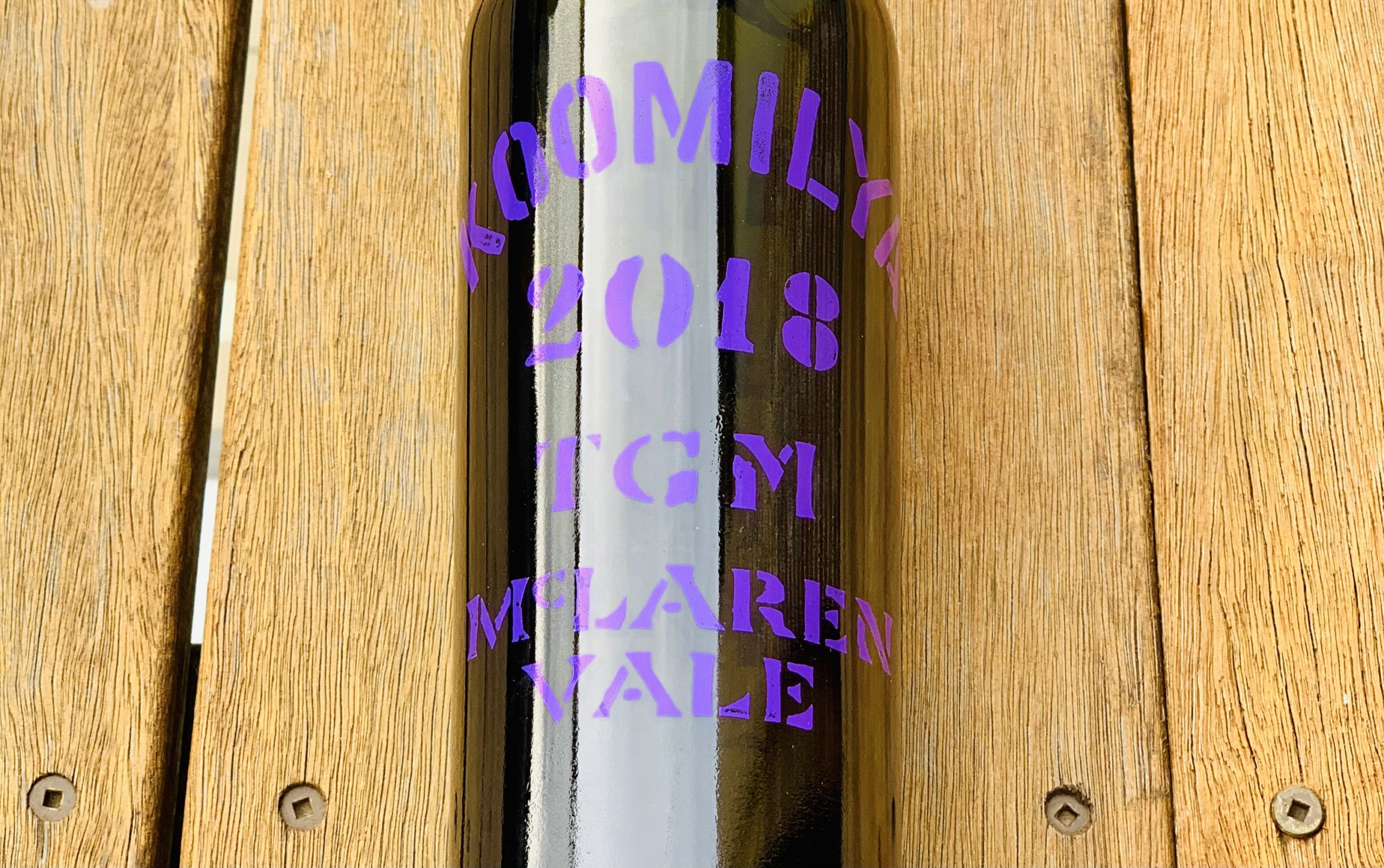 Touriga Nacional is a great grape, dabbing its powdery tannins and blue floral brushstrokes over everything it touches.
It plays a key role in both of the 2018 red blends from Stephen Pannell’s pride-and-joy Koomilya vineyard in McLaren Vale.
These are a surprise in more ways than one. It’s an early bonus ahead of the traditional Koomilya release, which will take place as usual in spring.
And then there’s the fact that Cabernet Sauvignon and Touriga were never meant to end up together in a Koomilya wine. But as Stephen Pannell says, they’re made for each other.

Simply stated, 2018 was a solid year. A vintage without extremes that was kind to both winemakers and vines alike. The fruit had lovely freshness and vivacity, the crops were of an average size and there was consistency throughout despite the dryness of the soil. Even the winemakers seemed to be enjoying themselves!

2018 Koomilya Touriga Graciano Mataro RRP $48
Upon purchasing the vineyard in 2012 I saw it as an ideal place to create a blend that included varieties I believe will see Mclaren Vale into the future and, furthermore, complement the traditional varieties of Cabernet Sauvignon and Shiraz. We grafted two contoured and terraced blocks on deep red soil to Tempranillo and Touriga Nacional; planted Graciano and Mataro; and restored the health of a neglected row of Mataro planted in the mid-19th century. The first wine to be released was the Touriga Cabernet Mataro, released under S.C. Pannell, that went on to win Wine of Show at the Mclaren Vale Wine Show in 2016. The blend may change from vintage to vintage, but the wine will always be unmistakably Koomilya.
Touriga Nacional (78% of the blend), Graciano (11%) and Mataro (11%) were hand-harvested on 28th March 2018 and co-fermented, spending 10 days on skins. The wine was gently pressed and sent to old French oak puncheons to complete malolactic fermentation. It was later racked to a 2800-litre French oak vat for maturation, and bottled on 11th December 2019 without fining or filtration.
The nose shows violets, ripe plum, woody spice, black grapes, molasses and 70% dark chocolate. The dark aromas and colour lead you to believe the palate will be heavy, but a surprise awaits. Touriga’s typically savoury entry is followed by a gradual unfurling of dark fruits from the Mataro and Graciano. The tannins penetrate all corners but don’t dominate nor distract from the freshness of the fruit. The finish is intensely long and moreish. – Stephen Pannell

2018 Koomilya Cabernet Touriga RRP $71
Upon purchasing the vineyard in 2012 I saw it as an ideal place to create a blend that included varieties I believe will see Mclaren Vale into the future and, furthermore, complement the traditional varieties of Cabernet Sauvignon and Shiraz. We grafted two contoured and terraced blocks on deep red soil closest to the scrub at the top of the east-facing slope to Touriga Nacional with the intention of blending with Tempranillo, Graciano and Mataro. Blending with Cabernet Sauvignon was never planned but as fate would have it there is magic between the two varieties that can’t be ignored.
Block 1 Cabernet (76% of the blend) and Block 8 Touriga (24%) were hand-harvested on 15th March 2018 and sent to separate open-top fermenters. The Cabernet spent 12 days on skins before gentle pressing and the Touriga saw eight days’ maceration before pressing. Both portions were sent to extra-large French oak puncheons (50% new) for malolactic fermentation and maturation. The wines were blended in mid-November 2019 and bottled on 10th December 2019.
The nose shows blackcurrant bon bons, cassis, black tea, mahogany and violet. The classic Cabernet leafiness is toned and buffed by Touriga’s dark floral notes.
The dark, faintly sweet entry is delicious, the complexity immediately apparent. The tannins are taut and dusty, like splitting red gum for the combustion stove, and the finish has a precision, tension and length that means this was no accident; these two varieties are meant for each other. Just ask the Bordelais. – Stephen Pannell

2017 was a very cool, mild and stress-free vintage for vines. Good winter and spring rains were followed by a very mild, long summer. The results are wines with ample fruit complexity and great natural acidity. Most important however is the delicious fruit freshness and balance.

2017 Koomilya Shiraz RRP $71
The third release is sourced from a single block, an old Gewurztraminer vineyard that was grafted to Shiraz in the early ’90s, known as the GT block. It was found in reasonably poor condition upon purchase in 2012 but is now restored to full health. The block sits in the middle of the Koomilya vineyard between the JC and DC and has its own unique character that unsurprisingly sits between the delicacy of JC and the power of DC.
The fruit was hand harvested on 11th March, crushed and sent to fermentation with 16% whole bunch. It spent a total of 10 days on skins in open top fermenters with gentle pumpovers before being pressed off­ with hard pressings removed. It was naturally fermented – the key to this style, giving greater complexity. Settled in stainless steel for 28 days to complete malolactic fermentation, then racked to puncheons (20% new) for maturation.
Blackberry and bramble ‑fill the room on removing the cap. There is nothing shy about the red wine aromas that smell unmistakably of Koomilya: freshly cut red wood, mahogany, iodine and liquorice. It’s cool on entry with a nice flow of dark fruit to the back of the palate where the tannins kick in, supple and supportive. The backbone of acidity keeps all in check. Mid-weight and carefree, speaking clearly of Upper Tintara Shiraz. – Stephen Pannell

Blackberry, liquorice, rock pool and oyster shells, warm scents of polished wood with a little nougat and sizzled sage leaf in tow. Medium-bodied, kind of wants to be full-bodied, but keeps itself sensible. Blackberry and raspberry coulis, but then something of a veal with capers and black olives savoury thing happening (don’t mind me), tannin is supple and has a sort of wool feel, and the finish is earthy and saline, and satisfyingly long. Distinctive.  It recalls that comforting feeling of reading a favourite book for the second (or third) time in your favourite chair. Lovely. 95 points. Gary Walsh, The Wine Front October 2020

Deep, dense red/purple colour. Vegetal and peppery aromas, suggesting some whole-bunch in the ferment, turning floral the longer it’s in the glass. The palate is full-bodied and round, sweetly succulent in fruit and laced with abundant soft but drying tannins. The finish is rich and supple and rolls on and on with lovely harmony and leaves an after-impression of great charm. A long-termer. 95 points. Huon Hooke, The Real Review May 2021

2017 Koomilya Tempranillo Touriga RRP $53
Upon purchasing the vineyard in 2012 I saw it as an ideal place to create a blend that included varieties I believe will see McLaren Vale into the future and, moreover, complement the traditional varieties of Cabernet Sauvignon and Shiraz. We grafted two contoured and terraced blocks on deep, red soil to Tempranillo and Touriga Nacional, planted Graciano and Mataro and restored to health a neglected row of Mataro planted in the mid-19th century.
The first wine to be released was the Touriga Cabernet Mataro released under S.C. Pannell, which went on to win Wine of Show at the 2016 McLaren Vale Wine Show. The blend may change vintage to vintage but the wine will always be unmistakeably Koomilya. Alcohol 14%; pH 3.76; TA 5.5g/L.
Aromas of blackberry, fruits of the forest, red toffee apple, roast beetroot, smoky paprika and Dutch cocoa. The palate shows red toffee apple and blackberry on entry followed by cocoa and paprika, finishing with Touriga’s signature fruit mince and plum pudding. There is tension to the texture from a firm spine surrounded by generosity. The tannins ripple and repeat, folding back on themselves. – Stephen Pannell

Stephen Pannell grafted two terraced blocks to Tempranillo and Touriga when he purchased Koomilya in ’12. In ’17 (as intended) the two parcels were vinified separately before blending, then transferred to a large French oak vat for maturation. It’s chock-full of black fruits, licorice, dark chocolate and multi-spices. 94 points. James Halliday, Halliday Wine Companion 2020

This is a very plush, rich and silky Touriga with a ripe red-plum nose and gently spiced complexity below. The palate has a super smooth, fine and silky texture and delivers long, fresh and elegant on the finish. Effortless. Drink or hold. Screw cap. 94 points. Nick Stock, JamesSuckling.com June 2019