This release is your last chance be able to tell the inevitable bandwagon-jumpers: I was into Wantirna Estate before they got big.
Because they’ve expanded – or didn’t you hear?
After decades of huffing and puffing, banging heads and tripping over each other in the cramped ‘70s-built winery, they knocked up a new little annexe in time for vintage 2019. When this Yarra pioneer set out, there was no real template for the small-batch winery. The gravity-fed set-up that materialised was all very well but on this flattish fringe of the Yarra Valley, it meant a configuration with varying floor levels anda heavy reliance on stairs. “While this made the winery a rather quaint and vaguely romantic version of a European domaine, it was rather a headache to work in!” recalls Maryann Egan.
So these days the Egan family literally has some headspace; a little extra elbow room for peaceful plunging. This release is the last quartet conceived and raised back when Wantirna Estate was its original size. Of course that’s just the cellar; this is still and always will be the family’s 12-acre garden of vines, tended with an innate and loving sense of its truth and personality.
The range is an exercise in concision – not just in comprising the same four wines, but also in the eloquent and to-the-point way in which they express the land and the Egans’ warm, elegant sensibility. In fact, this enterprise is the very definition of “small and perfectly formed”.
Physically, perhaps, it’s a tiny bit less small than it used to be. But philosophically, and in feel, the Wantirna Estate experience remains as intimate and genuine as it gets in Australian wine. 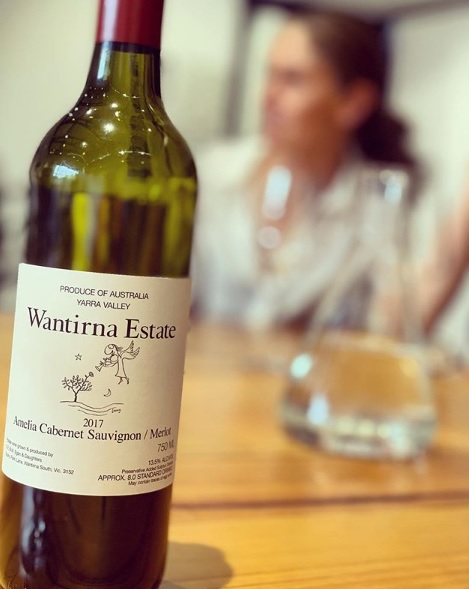 2018 Wantirna Estate Isabella Chardonnay RRP $87
At a Yarra Valley wine seminar a few years back, around 20 Chardonnay wines were served blind to a room full of wine writers and sommeliers. The final bracket was poured, which included Isabella. As the origin was unveiled the MC announced that this was a Chardonnay reflecting the vineyard, the people who made it and was perhaps a little ‘old school’. I must say that I took that as a compliment as this was during a phase of some Yarra Chardonnays being made on the leaner side of ripeness. Ours stood out as being a wine with plenty on offer, but still with style and refinement.
In general, Yarra Chardonnay winemaking has passed that little phase of looking for racy acid first, and flavour second. It was never a style that we embraced. The great benefit of being a small winery with an established history allows us to forge our own way and not feel obliged to dramatically change our style.
Chardonnay needs flavour; it’s not in the aromatic category of white wines like Riesling or Sauvignon Blanc. Certainly, it needs to have good acidity, but it also should have good depth and weight that allows it to be fleshy, but at the same time refined.
The Isabella is of course a little different every year, as the seasons change. The 2018 is very much a classic wine from us. The age of the vines and the corresponding lowering of their yield has delivered a wine of richness. Very little malolactic fermentation occurs so as to maintain a lovely line of quartz-like acidity. In terms of oak, less than 25% is new, and about 10% is held in stainless steel to capture some of that pure fruit.
On that seminar day we were thanked for making wine with flavour, and one comment was: “Your Chardonnay is always a joyous drink.” I quite like that. – Maryann Egan

2018 Wantirna Estate Lily Pinot Noir RRP $87
2018 was a bit kinder to us in terms of Pinot Noir quantity. Our low-yielding front block managed to produce a few more bunches than in years past, as did the fruit-tree block. But it was the mature vines – our unknown clone of Pinot that was planted in the early 1970s – that stood out.
Earlier in the season we agreed to let the Yarra Valley Winegrowers’ Association’s technical committee take some cuttings from our vineyard, the idea being that they create a vine museum nursery using cuttings from the region’s original vineyards. Not all the original vineyards agreed to share their cuttings, but we thought it was important to participate as a way of future-proofing the region. Yes, we have our own unique clones here, but we also know that whatever clones we have used, they have acclimatized to our property, our soil, our microclimate. And over the years the vines have evolved into a ‘Wantirna Estate’ version of their original clone.
As part of this museum collection, the ‘unknown clone’ block cuttings were tested for many things, one being confirmation of actual grape variety. And it’s fair to say we prepared ourselves – given the different shape and size of the bunches – for the verdict to be Gamay rather than Pinot Noir! (After all that wouldn’t have been a terrible thing – there are some beautiful examples of Gamay on our wine shop shelves.) But as it turned out, our mature Pinot Noir was indeed Pinot and in this particular growing season it produced some pretty gorgeous, albeit hefty, bunches.
We always attribute our Pinot fragrance to this mature, and the 2018 shows this. It’s a wine with dark berry and cherry fruit purity, with underlying ripe, fine tannins that give the wine a terrific finish. More like the 2016 Lily than the heftier 2017, this is  a wine with lovely perfume and elegant mouthfeel.

Maryann Egan, who I’ve met a few times now, is one of the better people in the world of wine. Not to say that makes a difference to what’s in the bottle, though at whiles I like to dream that good character could perhaps be osmotic…
Cherry cola, creamy spicy oak, dried mint. Medium bodied, lovely fine silty tannin provides traction, even acidity, poached spiced strawberries, shines on the finish with a pretty perfume and dried herb, and carries long. It’s a light wine of substance, if that makes sense. Easy to like. 93 points. Gary Walsh, The Wine Front October 2019

2017 Wantirna Estate Amelia Cabernet Sauvignon / Merlot RRP $87
There’s no doubt that 2017 was a terrific season. Budburst was later than the new norm, the month of February was mild, and the fruit developed in a uniform way. In fact, it was a vintage of the past, bucking the trend of ripe grapes in February. Instead we didn’t start picking until late March, with the Petit Verdot component the last to come into the winery in April.
The effect of our compost mulching of the Cabernet Sauvignon was particularly evident in the canopy, with the leaves hanging on far later into the season and allowing for a transfer of sugars to the grapes and the vines. We are ardent fans of the compost mulch; it has really made such a difference to our old vines. It’s fair to say that when you research the benefits of this sort of mulch, it seems too good to be true – increased vine vigour, better water retention, cooler soils, weed suppression, more friable soils and an introduction of soil organisms to reduce pathogens. But we have definitely seen huge improvement in all the areas we’ve treated. Each year as we load up the shovels, it’s exciting to know that more and more of the vineyard is reaping the reward. The only problem is that the ever-reliable uni-student granddaughter shovelers nearly all have proper jobs and don’t rely on part-time work much anymore!
The make-up of the Amelia this year is about 55:35:10 of Cabernet Sauvignon, Merlot / Cabernet Franc, and Petit Verdot.
The 2017 is typically Wantirna. If you follow any of the wine writers the common words used for the Amelia are poise and elegance, balance and grace, Classic. As one Yarra winemaker likes to say “Cabernet is king” – a lovely tribute to the variety that put Yarra Valley on the map. – Maryann Egan

Cabernets and Merlot from the original 1963 plantings, with 5% Petit Verdot coming off the 1989 plantings. All dry grown. Yarra Valley Cabernet from 2017 strikes me as being a more dense, compact year, with fine bones and lithe structure, and I like that very much.
Glorious Cabernet perfume of violet and pencil shavings, mint, blackcurrant and boysenberry, with the theme being intense small black fruit, I guess. It’s medium-bodied, dense and tightly knit, juiciness of blueberry and blackcurrant, layered in with more savoury tobacco flavour, graphite tannin, cool acidity, and a long, almost chocolaty finish. What a delight. Superb. 96 points. Gary Walsh, The Wine Front October 2019

2017 Wantirna Estate Hannah Cabernet Franc / Merlot RRP $157
One of the most fragrant smells to waft out of the winery during vintage is from the fermentation of the parcels of Cabernet Franc. So beautifully fruity with a blackcurrant aroma you can almost taste. Cabernet Franc is of course related to Cabernet Sauvignon. In fact, along with Sauvignon blanc, it’s the parent of Cabernet Sauvignon. Despite this, it is often mistakenly confused with Merlot. For many years when Merlot vine cuttings were ordered by the vigneron, it was Cabernet Franc that was delivered.  The mistake came from the great similarity in the shape of both varieties’ leaves. While they are easy to tell apart once the clusters are formed, the best way to identify them in early spring is by the colour of the growing tips – Merlot is white, and Cabernet Franc has bronze growing tips.
In our old original 1963 block we have quite the mix of Cabernet Franc and Merlot but as they ripen at a similar time, we harvest them together each year. In the “new” block – planted in 1985 – there are specific rows of just Merlot, and just Cabernet Franc. Both varieties tend to over-crop, so we always try to prune quite hard to limit the amount of buds per vine. Some years we also do a summer bunch thin to ensure that the vine remains well balanced and we can produce the very best grapes for the vintage.
The Hannah is aged in one new French oak barrel of 225 litres. By the time the wine is racked to the bottling machine, less than 280 bottles are made. – Maryann Egan, Wantirna Estate