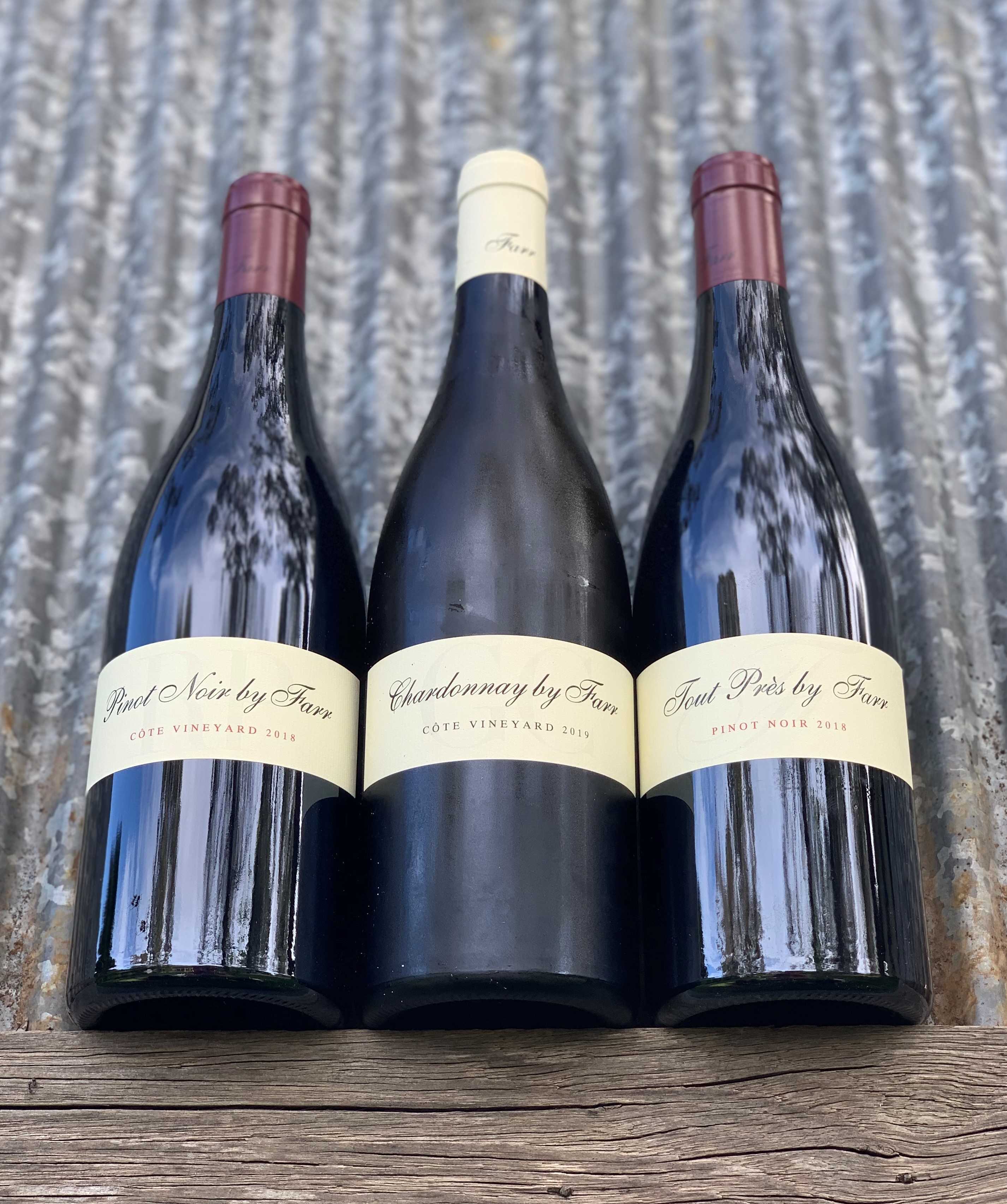 So, this is something special. The three pinnacle, single-vineyard wines from the newly anointed Gourmet Traveller WINE Winemaker of the Year. It’s a richly deserved accolade for Nick, who follows in his father’s footsteps, 19 years after Gary Farr wore the same crown. For us, this release represents a chance to drink in the fruits of all the wisdom these Bannockburn slopes have bestowed on these indefatigable farmers over the years.
That progression is neatly traced by these wines. Tout Près was Gary Farr’s ground-breaking apex, a Pinot Noir with unprecedented confidence and complexity – and a track record to match. GC and RP were introduced in homage to that first generation – the Chardonnay named for patriarch Gary Charles, the RP for Nick’s mother Robyn Pamela – from younger high-density plantings on the Côte Vineyard.
By the time the first GC was bottled from 2015, Nick had been playing with the fruit from these latter parcels for eight years. It was a knock-out debut; a statement. Not from Nick, so much; this truly was a case of the wine doing the talking. No point banging on about clones or oak or planting density. Tasting the wine made those details irrelevant. It was a show-stopper – alluring complexity, pulsating energy, a slew of minerals and a boom of flavour. And then an imprint of that sizzle and seduction, light but sticky and endless.  Uncanny in its balance and composure.
We’re now on the fifth GC, and the Côte Vineyard’s character has shone through in every harvest. The same goes for RP, its Pinot sibling from the same site, now in its fourth edition. It’s pure yet nuanced, rippling with energy, showing consummate precision and length.
The calmness of the wines – they unfurl so effortlessly, evenly and extensively on the palate – has been remarkable across the whole By Farr range in recent years. In these three wines especially, it makes you shake your head. What’s it like to witness a soothing symphony of fireworks?
GC, RP and Tout Près encapsulate everything that the Farrs have learned over 40-odd years in Bannockburn; how they’ve identified and improved, with minute precision, these two distinct sites. And then how to let go and leave the wines to do their thing.
Anyone who tastes these will agree: That thing really is something else.

The north côte is a red to brown loam with buckshot stones across the surface. It’s the most exposed of the three côtes but is harvested last of all because of the large amount of clay, holding valuable moisture for a longer time than the other slopes.
The northeast côte is a continuation of buckshot until the soil becomes black and lined with limestone moving towards the bottom of the rows and a depression that divides limestone from sandstone. At the highest point of the vineyard you will find small amounts of sandstone in the grey sandy loam.
The east côte is divided through the centre of the slope by a rise. It has black volcanic soil with fragmented limestone in one direction and grey loam with buckshot stones in the other direction. Soil is king, as the east côte has the least amount of clay and therefore the least water-holding capacity, resulting in it being harvested first even though it is the coolest côte of the three. – Nick Farr

2019 GC Chardonnay by Farr RRP $135
The fruit is hand-picked then whole bunch-pressed in the winery. All the solids are collected and chilled before being put to barrel (about 50% new French oak). A natural fermentation will occur at cool temperatures over the next one to two months, and then a small amount of stirring helps to start malolactic fermentation. The wine is then racked, fined and lightly filtered before bottling 11 months after picking.
A wine with great fruit presence and varietal character at the front of the palate, the power of this site then takes over and it finishes with a very assertive line of acidity.   As our greatest expression of Chardonnay, this wine has very quickly commanded a strong following around the world. – Nick Farr

It has real presence on the alluring nose. Lime peel, apple sorbet, nectarine, nutmeg, vanilla and flint, a cool spearmint note too. On the palate, you feel immediately the rev of energy. Cool fruit upfront with zest and bite from the off. Medium bodied and racy with a firm citrus, stone fruit and mineral core. It has super texture and impeccable line and length. The cool, grapefruity finish sails very long with fine-grained grip, notable stoniness and lingering fruit. It’s mouthwatering and moreish, like all these latest single-vineyard releases. Such energy, presence and complexity and yet they are also so completely, compellingly drinkable. – Ed Merrison, CellarHand

2018 RP Pinot Noir by Farr RRP $135
The fruit is handpicked and sorted in the vineyard, then fermented in an open-top fermenter. Between 40 to 50% of the fruit will be destemmed and then cold soaked for four days. We use only natural yeast for the fermentation process, which takes roughly 19 days. Grape-stomping (known as pigeage) will occur   two to three times a day depending on the amount of extraction required, and the wine is then placed in  50 to 60% new Allier barrels by gravity. It’s racked by gas after secondary fermentation, then again at 18 months to be bottled.
A bouquet of absolute intrigue and undergrowth from an extremely fresh and high natural acidity vintage. The elegant yet savoury power that we’re growing to love from the Côte Vineyard wines is showing once again from both the Pinot and the GC Chardonnay. The palate is lengthy and layered. It is a Pinot that keeps giving with every minute in the glass. This is one of the great Pinots we have made, with fantastic ageing potential. – Nick Farr

The RP presents a nose that is disarmingly pretty, pure and integrated, a compactness that belies its complexity. Roses, cake spices and sweet red fruit – strawberry sorbet, cherry and cranberry – are immediately apparent, with a suggestion of peach and an exotic note, too. Good oak in the background. With air, fennel and terracotta emerge. The attack is juicy and inviting. The bright fruit has a just-picked freshness and immediacy, and the tannins seem to glisten with a suggestion of cinnamon sugar. It has the line and length of precise Chardonnay, like an arrow through the palate shooting very long and pure. It’s medium-bodied, lithe and even, with sweet spices, saltiness and sour cherry settling on superfine, suede tannins long after the liquid has flowed through. A beautifully composed, harmonious Pinot that is so good to drink that you almost overlook the detail. – Ed Merrison, CellarHand

2018 Tout Près Pinot Noir by Farr  RRP $135
Only a touch over 2.5 acres, it has three individual soil types across a three-sided cirque (an amphitheatre-like valley head) that rises above the other vineyards. Each slope consists of a soil type. The largest slope is black volcanic soil of limestone, the second is quartz gravel mixed with red ironstone soil and the third, an iron strand in grey sandy loam. The clones that will acclimatise and mutate over time are currently 113, 114, 115, 667, 777 and MV6 to become the Tout Près clone. At 7,300 vines per hectare, Tout Près is the most densely planted vineyard on the estate (hence the name, meaning “very cosy”). The soils and intense competition force the vines to work hard, resulting in fruit that is lush but masculine and provides the coveted structure found only in the most ageworthy wines.
Tout Près is fermented with 100% whole bunches in a five-tonne oak fermenter. This wine has the flavour profile and intensity to absorb 100% new Allier French barrels. – Nick Farr

Immediately highly complex and intoxicating to smell, but thoroughly coherent at the same time. There are notes of earth, roast parsnip, rhubarb, cumin and ginger-biscuit oak under pot pourri, red cherry and satsuma plum. The sweet and savoury notes are immediately well balanced on entry, with so many threads woven through. Plush, expansive and kaleidoscopic but not clashing or loud. Layers of flavour glide around each other, with fine-grained tannins billowing across the palate and staining it with fruit and spices. A stony-earth mineral sense on the finish is a further foil to the ripe fruit shimmying through. Amazing length, if length is the right word when it seems to explode outwards into eternity – and yet the lasting impression is one of improbable delicacy. – Ed Merrison, CellarHand

2018 Farrside by Farr RRP $95
It takes time in the glass for assertive cedar wood oak to settle into the fruit but at all steps along the way this wine oozes both quality and class. You’re in the most skilled of hands here. Woodsmoke, assorted cherries, twiggy spice notes, flavour-infused acidity and fine-grained tannin. It’s a truly beautiful wine. 97 points. Campbell Mattinson, Halliday Wine Companion 2021

2018 Shiraz by Farr RRP $95
A special wine. It’s all tang and undergrowth, cherries and peppery spices but putting names to the individual flavours doesn’t do the overall effect justice. This is a wine of fresh-faced beauty; it’s a glance and a wink and a nod all rolled into one. How. It doesn’t take you long into the first glass to start wondering how they did it. It tastes like a kind of magic. 97 points. Campbell Mattinson, Halliday Wine Companion 2021