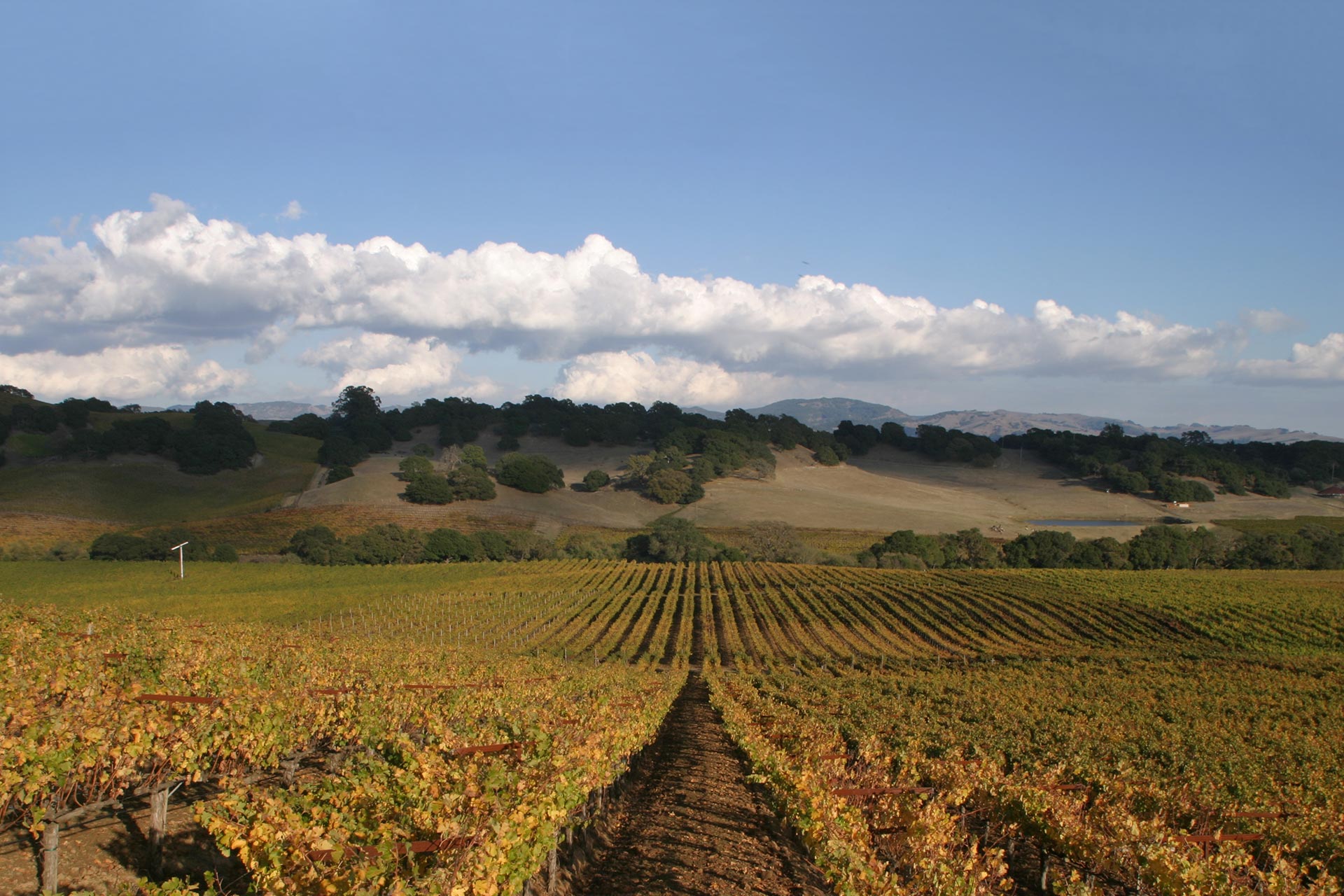 HdV is a family venture between Hyde Vineyards of Napa Valley and Aubert & Pamela de Villaine of Burgundy, France.
Aubert de Villaine, married to the Hydes’ cousin Pamela F. de Villaine, is one of Burgundy’s most recognized individuals. Born and raised in the rich traditions of France’s greatest winemaking techniques, Aubert brings to the partnership the foundation upon which the venture bases its theories and practices.
Larry Hyde came to the Napa Valley more than 40 years ago with a great love of wine and the soil. In 1979, Larry left his job as an apprentice at some of Napa’s finest wineries to purchase and transform the Carneros soils into what is now known as Hyde Vineyards. Over the intervening period, Hyde Vineyards has become renowned for the unique expression of its Carneros terroir.
Winemaker Stéphane Vivier joined HdV in 2002, bringing with him skills in vineyard management and winemaking from around the world. Born and raised in France, Stéphane’s skills were cultivated in the vineyards and cellars of Pommard, Meursault and Chassagne-Montrachet and then expanded through his work in New Zealand and Sonoma Coast.
HdV is bottled under the coat of arms of the historic de la Guerra family from which Pamela de Villaine and the Hydes descend. The de la Guerra Family is one of the oldest winemaking families in California and traces its winemaking history back to a gold medal received at the 1876 Philadelphia Centennial Fair.
This coat of arms symbolises the sense of tradition, family and winemaking history that this venture embodies. The wines of 2015 and 2016 are a particularly exhilarating drop-off point for anyone taking the plunge into these graceful, elegant expressions of place.

2016 HdV Chardonnay LUC $118.25 RRP $195
2016 started with a cold and wet winter, which gave the vines a well-deserved dormancy after the fast-paced growing season of 2015. Bud break occurred in mid-March and was followed by a dry and warm spring. This resulted in a healthy and vigorous canopy and ideal pollination. Heavy fog in early August slowed down the maturation process and allowed for optimal phenolic development while retaining the freshness and natural acidity Hyde Vineyard is known for. The 2016 harvest began the second week of August and was completed by the first week of October.
100% Chardonnay (“Old Wente” and Calera selections) grown on the Hyde vineyard on the eastern edge of the Carneros sub-region of the Napa Valley. The Chardonnay site has a south by southeast exposure, with soils of shallow loam over clay pan. Vine age is between 25 and 37 years. The fruit was harvested between 27th August and 12th September. The wine was aged for 14 months in French oak barrels, of which 20% were new. It was bottled unfined and unfiltered.
High-toned aromas of mandarin blossom and lemongrass frame a core of zested Meyer lemon and Freestone peach. This wine shows focus and precision, yet surprisingly balanced opulence. Crushed seashell minerality flirts across the palate and accentuates the fresh-picked pear and Braeburn apple flavours. Finishing with warming clove and a hint of gunpowder and flint, this wine impresses from start to finish. Its balanced structure promises enjoyment in its youth but also decades of ageability.

The 2016 Chardonnay Hyde Vineyard is a very pretty wine. Gentle apricot, tangerine, spice, dried flowers and mint are all woven together. Although quite subtle, the 2016 has plenty of structure, it is just expressed in an understated manner. There is so much to admire in this pristine Chardonnay from Hyde De Villaine. Silky and polished, the 2016 will drink well upon release. 92 points. Antonio Galloni, Vinous Media December 2018

2015 HdV Chardonnay RRP $195
The drought cycle that started in 2012 continued in 2015, as a result, we experienced a warm dry winter and an early start of the vegetative cycle with bud break in February. In May, unseasonably cool weather caused poor pollination, resulting in concentrated fruit due to millerandage; small, seedless berries amid a few normal berries, creating intensity and complexity in the juice. The summer was hot overall at Hyde Vineyard. Thanks to a few cool days in early August, the growing season was extended, allowing the grapes to reach great maturity.
This is 100% Chardonnay (“Old Wente” and Calera selections) grown on the Hyde Vineyard on the eastern edge of the Carneros sub-region of the Napa Valley. The Chardonnay site has a south by southeast exposure, with soils of shallow loam over clay pan. Vine age is between 24 and 36 years. The fruit was harvested between 15th August and 1st September. The wine was aged for 11 months in French oak barrels, of which 20% were new. It was bottled unfined and unfiltered.

The 2015 Chardonnay Hyde Vineyard is bright, pure and focused, especially within the context of the year. Winemaker Stephane Vivier did a terrific job in capturing a compelling interplay of freshness and textural richness. Lemon peel, white flowers, white orchard fruit and mint give the wine its lifted personality, but there is plenty of palate weight and depth. This is a classy, super-polished Chardonnay from Hyde de Villaine. 95 points. Antonio Galloni, Vinous Media December 2018

2016 HdV Ygnacia Pinot Noir RRP $319
The grapes for this Pinot Noir are grown on the Hyde vineyard at the eastern edge of the Carneros sub-region of the Napa Valley. The 1.9-acre site has a southern exposure and soils in the Pinot parcel are Haire clay loam over clay pan. The fruit was harvested on 15th August and the wine spent 17 months in French oak, 15% of which was new. It was bottled unfined and unfiltered.

The 2016 Pinot Noir Ygnacia Hyde Vineyard is a more than worthy follow up to the stunning 2015. Lavender, rose petal, orange peel and mint lift from the glass in a silky, weightless Pinot Noir loaded with personality and sheer class. The 2016 possesses striking inner sweetness and exceptional balance from start to finish. These vines were planted only in 2010 with seven massale selections taken from a variety of sources and yet some of the wines so far have been truly remarkable. Gracious and understated, the 2016 is stunningly beautiful. 94+ points. Antonio Galloni, Vinous Media December 2018

2009 HdV Californio Syrah RRP $113
Entering the third year of a drought, the 2009 winter was dry at Hyde Vineyard until unexpected rains in early spring. Bud break was later than usual avoiding any risk of frost damage; persistently mild weather created a long, slow ripening vintage leading to wines of balance and deft concentration.
The Syrah fruit is grown on the Hyde Vineyard at the eastern edge of the Los Carneros sub-region of Napa. The plot has a south by southeast exposure and features soils of shallow loam over clay pan, with ancient alluvial fans beneath. The wine is matured for 22 months in French oak barrels (30% new) and is bottled unfined & unfiltered.

A more overt wine, the 2009 Syrah Californio Hyde Vineyard is pure silk on the palate. Stylistically, the 2009 lies between the 2007 and 2008. Deep, resonant layers of dark red fruit, cinnamon, white pepper and freshly cut flowers meld together beautifully in the glass. An explosion of fruit reappears to frame the finish. 94 points. Antonio Galloni, Vinous Media December 2012