Corymbia is the deep-rooted, far-sighted vision of husband-and wife-team, Rob and Genevieve Mann. The Mann name is synonymous with Western Australia’s Swan Valley, where Rob’s pioneering grandfather Jack worked a remarkable 51 consecutive vintages for Houghton. Rob was just a boy when he joined his father - former Australian test cricketer Tony - in planting the vines on what is now the dry-grown, organically farmed Corymbia vineyard.
After building an exceptional reputation in their own right, the couple kicked off their homecoming dream, Corymbia, with the 2013 vintage, during Rob’s tenure as estate director at Newton Vineyard in Napa Valley. Now firmly ensconced back in the Swan Valley, Rob and Gen’s Chenin Blanc and Tempranillo-dominant red blend sit at the heart of a bright future for this brilliant duo. And their Margaret River Cabernet Sauvignon, from their beautiful Calgardup Vineyard, is a new milestone for this region. 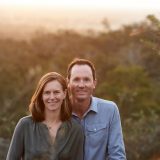 Rob was one of the crop of hotshots at Hardys during the reign of Stephen Pannell, before Rob himself took the mantle of senior winemaker at Hardys Tintara. From there he established a name for himself as one of the great talents of his generation during his time at the helm of Cape Mentelle - eventually being handpicked to radically ramp up quality at LVMH's Napa estate Newton Vineyard. Genevieve, meanwhile, worked in South Africa, France, California and South Australia prior to moving to Margaret River in 2007 in the role of winemaker for Howard Park.