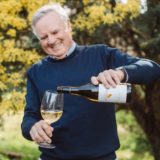 Geoff has been involved in the wine industry since he joined Orlando in 1972. Geoff progressed to the position of white winemaker for Thomas Hardy and Sons in 1975, where he was responsible for the vintages at Siegersdorf in the Barossa and at Waikerie and Padthaway. In 1988 Geoff was appointed chief winemaker for the Hardy group of companies overseeing winemaking of around 10% of Australia’s grapes.
Even then, Geoff recognised that the future of Australian wine depended on the quality of the vineyard, so he and wife Judith embarked on a project to grow the best possible fruit in a new state-of-the-art site at Lenswood. This was a pioneering venture into an untried region. They planted the vineyard at Lenswood in 1982 and have steadily developed it to its current 11 hectares.
In 1992 Geoff made the break from corporate winemaking and left to pursue his winemaking dreams at Lenswood full time. In doing so his responsibility went from 120,000 tonnes of fruit at Hardy’s to 70 tonnes from Lenswood.