Jakab Pince was established by Zoltán Jakab in 2007, the year he met pioneering electronic musician-cum-winemaker Attila Homonna. Zoltán asked Attila to vinify his first vintage that year, and since then they have gradually built the winery step by step, purchasing more land and increasing production. The estate’s home is on Padi-hegy, the Jakab family’s original vineyard, while Zoltán also has holdings on Rány, considered by many to be the jewel in Tokaj’s crown. Jakab has been organically farmed since day one, and shares with Homonna a simple, natural, holistic approach to winegrowing. 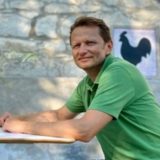 Zoltán Jakab is a medical doctor who was infected by the winemaking bug as a child by watching his late grandfather tending to his small vineyard near Miskolc, a large city about 50km from Tokaj, making a small amount of wine each year for family consumption. Some years later, his father purchased some vines in the Padi-hegy vineyard, which is the base for the winery today.