It was 2009 when Luigi Baudana entrusted the Vaira family with his historical vines in Serralunga d’Alba. For the Vairas, it was a dream come true; Aldo had always loved Barolo from the Helvetian soils of the area, and felt honoured to have the chance to better understand and work this land. With their love of a challenge, the Vaira family jumped at the chance to start a new adventure. With only 2.6 hectares (6.4 acres) farmed in some of the prime crus of the village, this can rightly be considered a true garagiste producer. Cerretta and Baudana rival the very best single-cru Barolo of the region. The range also features a Barolo that flies the flag for the Serralunga commune, and is rounded out by a fresh, original co-fermented white field blend called Dragon. 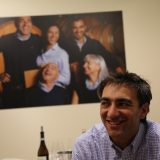