Vineyard
The Shiraz and Grenache grapes are grown on the Hudson Vineyard in the Hilltops region of NSW by Xanthe Freeman and Will Snedden. The vines, planted in 1999, have their roots buried firmly into red clay loam topsoil over decomposed granite with a very consistent artesian water supply. The region has a very continental climate with high diurnal temperature range, particularly through February and March, which ensures slow ripening and excellent flavour accumulation.
Vintage and growing conditions
Good rains through 2020 winter ensured strong canopy growth while a cooler-than-usual early summer with some precipitation kept the vineyard crew on their toes. Summer remained cool and resulted in long, slow ripening with Shiraz and Grenache picked in early March. Alcohol 13%; pH 3.4; TA 6g/L.
Tasting
It’s pale salmon with a mauve blush. Rose-petal florals over wild herbs on the wind. A hint of cherry blossom and watermelon with some brambly spice add aromatic complexity. Wild herbs, spice and white cranberry on entry open to Morello cherry and Umeshi. The palate is multi-layered with a dry and textured mid-palate building to a long and flavoursome finish. A fruit-driven but savoury rosé. 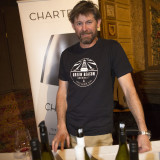