The rich, welcoming spiced apple aromas of the 2003 Auxey-Duresses lead to a big, mouth-coating character jam-packed with buttered apples. Deep, suave, and expressive, it also possesses a long, silky finish. Drink it over the next 7-8 years.

This is the personal domaine of Lalou Bize-Leroy, based in Saint Romain. It has village and premier cru vineyards in Meursault, Auxey-Duresses and Puligny, plus the grands crus of Chevalier-Montrachet, Criots-Bâtard-Montrachet, Bonnes-Mares and Mazis-Chambertin.
After several years now working with Lalou, we are only just starting to see the fruits of our labour by being offered a tiny parcel of d’Auvenay wines (no more than a dozen or so bottles of each) alongside those of Domaine Leroy. Admirers of Coche-Dury or Domaine Leflaive (and let’s face it, who isn’t?) would be well advised to take a very serious look at these d’Auvenays. 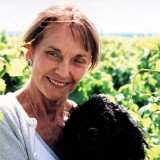 Lalou Bize-Leroy started out as a négociant working for Maison Leroy, which was founded in Auxey-Duresses in 1868 by her great grandfather, François. Since then, her fame has spread right across the world of fine wine as part-owner and former co-director of Domaine de la Romanée-Conti. She is also the formidable driving force behind Domaine Leroy and Domaine d'Auvenay, this latter her personal domain based in Saint-Romain. In 2015 she celebrated her 50th vintage of choosing the wines for the family négociant business, and continues to show the prowess and judgment that earned her the moniker "Guardian of Great Wines".