2016 started with a cold and wet winter, which gave the vines a well-deserved dormancy after the fast-paced growing season of 2015. Bud break occurred in mid-March and was followed by a dry and warm spring. This resulted in a healthy and vigorous canopy and ideal pollination. Heavy fog in early August slowed down the maturation process and allowed for optimal phenolic development while retaining the freshness and natural acidity Hyde Vineyard is known for. The 2016 harvest began the second week of August and was completed by the first week of October.
100% Chardonnay (“Old Wente” and Calera selections) grown on the Hyde vineyard on the eastern edge of the Carneros sub-region of the Napa Valley. The Chardonnay site has a south by southeast exposure, with soils of shallow loam over clay pan. Vine age is between 25 and 37 years. The fruit was harvested between 27th August and 12th September. The wine was aged for 14 months in French oak barrels, of which 20% were new. It was bottled unfined and unfiltered.
High-toned aromas of mandarin blossom and lemongrass frame a core of zested meyer lemon and Freestone peach. This wine shows focus and precision, yet surprisingly balanced opulence. Crushed seashell minerality flirts across the palate and accentuates the fresh-picked pear and Braeburn apple flavours. Finishing with warming clove and a hint of gunpowder and flint, this wine impresses from start to finish. Its balanced structure promises enjoyment in its youth but also decades of ageability.

The 2016 Chardonnay Hyde Vineyard is a very pretty wine. Gentle apricot, tangerine, spice, dried flowers and mint are all woven together. Although quite subtle, the 2016 has plenty of structure, it is just expressed in an understated manner. There is so much to admire in this pristine Chardonnay from Hyde De Villaine. Silky and polished, the 2016 will drink well upon release.

Hyde de Villaine is a joint venture between Larry Hyde and Aubert de Villaine. Aubert is one of Burgundy's most recognised individuals, as co-director of Domaine de la Romanée-Conti and director of his own wine company, A. & P. de Villaine. Larry comes from one of oldest farming families around Napa and brings to the partnership more than 30 years’ experience in California . Together with winemaker Stéphane Vivier they apply the traditions of the Côte d'Or to the fruit of the Napa, thus producing wines of regional character with the minerality that is so dear to the Burgundian palate. 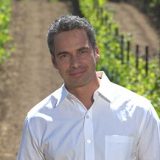 Stéphane Vivier joined HdV in 2002, bringing with him skills in vineyard management and winemaking from around the world. Born and raised in France, Stéphane’s skills were cultivated in the vineyards and cellars of Pommard, Meursault and Chassagne-Montrachet and then expanded through his work in New Zealand and Sonoma Coast.