Made from 100% Merlot from the Yarra Valley. The fruit was pressed lightly to tank, settled for two weeks, then racked to barrel for fermentation. The wine was kept cold to prevent Malolactic fermentation and was then racked to tank filtered and bottled in July with minimal SO2. 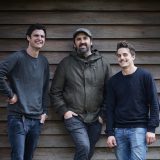