The Clos Mathis belongs to Ostertag’s long-serving former vineyard manager, Hubert Mathis. This remarkable 0.6-hectare vineyard surrounded by stone walls is located in Ribeauvillé, in line with the grand crus Geisberg and Kirchberg. The soil is composed of a granitic mother rock and gneiss, with poor fertility. The vines are grown on terraces, on a very steep south-east facing slope which benefits from hot days and cool nights. The heat is tempered by cool winds coming down at night from the valley that ends just after the vineyard. This particular location allows slow ripening, preserving acidity and finesse in Riesling.
Hubert Mathis inherited this plot from his parents. He has entirely rebuilt it and was initially selling the grapes to a local merchant, until 1997 when he and André decided to reveal this very beautiful historic vineyard which has been esteemed since the Middle Ages and the time of the Seigneurs de Ribeaupierre.
The 1997, 1998 and 1999 vintages were dedicated to working on the soils and starting to farm the clos biodynamically, in order to reveal the soul of this beautiful terroir. The first vintage as part of the single-vineyard range of the domaine, under the Clos Mathis label, was 2000.
Clos Mathis gives birth to classic, distinguished, long-lived Rieslings. Some aspects can make it seem austere in its youth, the structural elements (acidity, mineral tannins) in the foreground while textural and aromatic elements are rather timid, but with time the Clos Mathis becomes a sappy, classically dry wine in the breed of greatest Alsatian Rieslings.
In 2018 the hand-picked grapes were gently pressed with the whole bunches for about nine hours. The wine ferments spontaneously in stainless steel tank and is kept on its gross lees until a couple of weeks before bottling. It was bottled in early September 2019 with a balance of 13.5% alcohol and 2g/L of residual sugar. – Arthur Ostertag 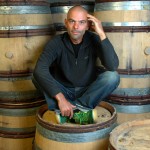