Gewurztraminer at the Domaine is always made in an off-dry style. Indeed it's picked later than the other varieties, with a balance similar to most Alsatian vendanges tardives, yet while the vine is still feeding the berries with water and nutrients so before the fruit starts to dehydrate. The result is a fruit-driven wine that is the reflection of the variety's heady personality but balanced by a subtle and ethereal freshness. This is a very bright and elegant wine, with aerial balance and no heaviness at all. It has flavours of yellow and white fruits, honey and a hint of sweet spices and white pepper

Domaine Ostertag is clearly one of the most dynamic producers in Alsace, and certainly one the highest rated. Where in many areas Alsace has fallen behind star producers in Germany and Austria, Ostertag is one that bucks this trend. This is a family-run property comprising 12 hectares spread over more than 75 small plots of vines within five villages: Epfig (55%); Nothalten (34%); Itterswiller (4%); Ribeauvillé (6%); and Albé (1%).
Biodynamism was extended to 100% of the domaine in 1998, precluding any use of herbicides, chemical fertilisers and insecticides. All viticultural work is done manually, including harvest. In the cellar, press cycles are long and gentle, fermentations are long and conducted with indigenous yeasts, and wines are left on their lees. Barrels are used for Pinot Blanc, Gris (sometimes) and Pinot Noir. Arthur Ostertag, whose involvement deepened with the 2015 harvest, effectively assumed the helm from his father in 2018. Arthur's instincts and sensitivity mirror those of his passionate and free-thinking father, and we believe these wines have never been better.
Biodynamic producer 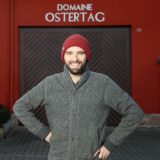 Arthur Ostertag's grandfather founded the domaine back in 1966 and handed the keys to the cellar to André Ostertag in 1980, when the latter was just 21. André has always seen wine as a language that speaks to the senses of sight, smell, taste and touch - and one that calls upon the grower's critical faculties, as well as memory (and memories). His winemaking is a "very soft process" that relies on preserving the living matter - slowly shaping the wine over a long time. Assuming control in 2018 - and with two generations still at his side - Arthur embodies this same approach. The Jardins range is a gracefully evocative introduction to the nature of the family's plots of vines, while Arthur continues to honour the spirit of observation and experimentation with occasional bottlings such as L'Éxutoire and Les Aventures de l'Agneau Masqué. At the top of the tree, the grand cru Muenchberg and lieu-dit bottlings balance sensuality and precision with peerless brilliance.