The classic Australian blend: 80% Cabernet Sauvignon off our 70-year-old CP block and 20% Shiraz off the GT block. Hand harvested on 26th February. The fruit spent 14 days on skins, before being pressed off, with the hard pressings removed. The wine was naturally fermented in open-top fermenters, which is the key to this style of wine, giving it greater complexity. Transferred to stainless steel tanks for 28 days until completion of malolactic conversion, and then sent to 2500-litre vats. Bottled on 8th June 2016 spending a total of 10 months in oak. Alcohol 13.2%; pH 3.56; total acidity 6g/L.

One of Pannell's greatest talents as a winemaker is his blending, and this is a shining example of a deft touch. The vintage has delivered superbly vibrant red and blue fruits, cassis, blueberries, red plums, raspberries and blackberries. The palate has silky textural appeal, gliding and building layers of fine velvety tannins that hold layers of bright fruit. Deceptively long, powerful and elegant. Drink now or hold.

Brooding blackcurrant fruit nose with some fine floral notes. Lovely freshness and purity here with good acidity. So pure and expressive, with real finesse. Tannic yet pure, linear and elegant. A classic.

Floral, but iodine and earthy, cedar and mint, red and black fruits, baking spice. It’s medium-bodied, soft and supple, such an easy charm and grace about it, fine powdery tannin, inner mouth-perfume, perfect acidity, and a very long finish where the tannin unfurls and shapes up the wine beautifully. Roses and dirt. Bass and treble. Classic Aussie red.

There's been a revival of interest in the classic Australian "claret" style of cabernet shiraz blends, and this is an excellent example: wild-fermented and matured in large, 2500-litre casks, it's a bright, tangy, elegant wine with attractive aromas of currants and dried herbs, and fine powdery tannins. Like all the Koomilya reds, it will reward extended cellaring. 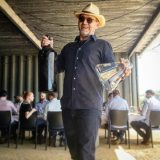