Two Wolves Vineyard: Block 10 (0.86 acre), north-south planted rows. Planted in 2010 to Clone 1058 on Rootstock 101-14. Soil: Positas fine sandy loam with clay.
The fruit was hand harvested and destemmed for native yeast fermentation in a stainless-steel tank. After three weeks on the skins, the wine was pressed to French oak (70% new) where it matured for 20 months until bottling.
Opens with blackberry, forest floor, and plum aromas. In the mouth the fine chalky tannin is complemented by plush fruit and dried herbs. – Alecia Moore

Two Wolves is the wine project of Alecia Moore, grown on her organic-certified vineyard in Santa Barbara County in California's central coast. Alecia - better known by her stage name, Pink - bought the vineyard in 2013 and added new plantings to the Two Wolves site (planted in 2005 and 2010) in 2015. That same year, she planted another site on the property - Right Left vineyard - and recruited California-born winemaker Alison Thomson to make the wines alongside her. This was always conceived as an immersive, hands-on project from the curious, committed and intrepid Alecia – and she was only ever going to have another superwoman at her side, which she found in Alison. Australia, the country where Alicia first fell in love with wine, became the first export market for Two Wolves when CellarHand brought in a suite of wines from the 2018 vintage in mid-2022. 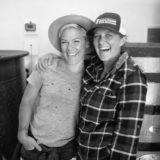 Alecia Moore's interest in wine began when touring Australia as on-stage alter ego Pink in the early 2000s. In the latter half of the decade she undertook studies through WSET and UCLA to take her knowledge up a level, and in 2013 she took the step of buying a vineyard in the Santa Ynez Valley. The other half of this dynamic duo is Alison Thomson, who grew up in the Bay Area and studied viticulture at UC Davis after undergraduate studies in biology and restorative ecology. She has run numerous projects in the Santa Ynez Valley and has her own label, L.A. Lepiane, focusing on Italian varieties. She joined the garagiste operation that is Two Wolves in 2015, and in lockstep with Alecia crafts ripe, fresh, expressive wines from the certified-organic estate vineyards.