Villa Wolf is the Pfalz estate of Mosel Riesling legend Ernst Loosen. The Pfalz region is in the Rhine river valley in southwest Germany, directly north of France’s Alsace region. The low-lying Haardt mountains protect the area from cold, wet Atlantic weather, making it one of the warmer and drier areas of Germany. Wine grapes do well here where it is possible to achieve full ripeness in every vintage. The predominant soil type in this area is well-drained, weathered sandstone. It produces wines with a fruit-driven purity and a stony structure.
After a dry winter and a very hot summer, the vines had been a bit stressed, but in a positive way, producing grapes that were small and very aromatic. The estate harvested perfectly ripe grapes at a record-breaking pace, finishing at the end of September. The Gewürztraminer is beautifully balanced with a lovely aroma that shows the classic rose petal character of the variety.
Harvested at perfect ripeness for a bright, fresh style. No overripe or botrytis-affected fruit is allowed. The fruit is processed as quickly as possible to preserve freshness, with fermentation and maturation in stainless steel tanks. Malolactic fermentation is avoided in order to maintain lively acidity. The wine is lightly filtered before bottling, with no other filtering or fining taking place. Alcohol 11.5%; residual sweetness 18.3 g/L; acidity 6.2g/L.
Villa Wolf Gewürztraminer is clean, fruity and wonderfully light on its feet, showing off the aromatic charm of the variety without being heavy or ponderous. It has a deliciously juicy texture and a delightfully delicate aroma of spice and fresh roses. It’s very refreshing to drink on its own and makes a perfect accompaniment to spicy Asian cuisine. 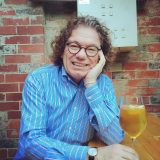 Ernst Loosen is one of the great characters of the wine world. He was born into great winemaking tradition but it wasn't his first instinct to take it up himself. Instead he went off to study archaeology and it wasn't until the mid-1980s that he was spurred to take the plunge into wine. His father was ready to turn the estate over to the next generation but none of Erni's brothers or sisters was old enough or interested enough to take it on. Thankfully, Erni threw himself into it with characteristic fervour. He completed studies at Germany’s renowned winemaking school in Geisenheim and then launched into a self-directed review of the great wines of the world.
He travelled to Austria, Burgundy, Alsace, even California. He went wherever great wine was being made, seeking out the best winemakers to find out what they had in common. What he discovered was that they all share a dedication to producing intense, concentrated wines that boldly proclaim their heritage. They also have a worldly outlook that allows them to maintain respect for tradition while tempering it with reason. This gives them the freedom to acknowledge that not all traditions deserve to be doggedly observed, and allows judicious use of modern winemaking techniques when it will improve quality.
Erni took ownership of the estate in 1988. Ungrafted vines averaging 70 years of age, in some of Germany's best-rated vineyards, gave him the raw materials to create stunningly intense, world-class wines. To achieve this, he dramatically reduced his crop size and stopped all chemical fertilisation, preferring only moderate use of organic fertilisers. And, most importantly, he turned to gentler cellar practices that allow the wine to develop its full potential with a minimum of handling and technological meddling.