News / Fire In The Hills: A Pioneer Wine Grower's Story 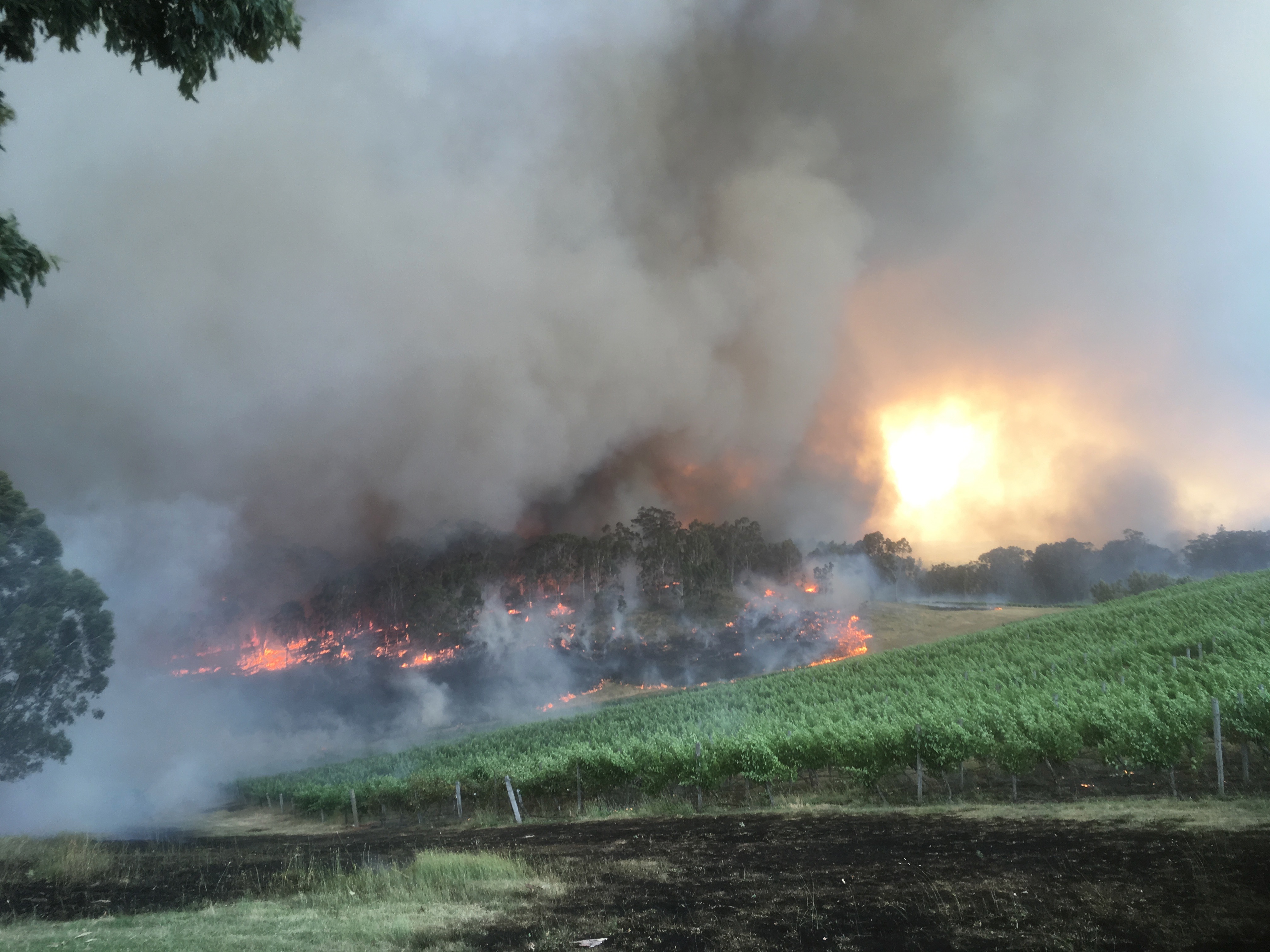 “You seem immensely calm, Geoff,” I said after listening to a bloke who’d spent the previous Friday watching his car, tractors and shed go up in flames as fires tore through the Adelaide Hills and scorched a third of his “spiritual home” – the vineyard he planted with his late father Henry and his own bare hands, 37 years ago.
And Mr Weaver, Hills pioneer and stalwart of humbly hand-farmed Australian wine, responded with trademark equanimity. “I don’t think there’s much point being anything else. It’s just a fact of life. My thinking is if you’re going to be in the countryside, one day you’re going to have a bushfire. You might as well be mentally prepared for it.”
Geoff knows he was, in some respects, lucky. He has neighbours like the Henschkes who lost up to 90% of their vines in the Cudlee Creek fire that raged through the region on Friday, 20th December. Others still had stocks and cellar door buildings wiped out in a disaster believed to have destroyed or damaged more than a thousand hectares of vineyards.
There’s a fair bit of experience informing Geoff’s sanguine stance. Risk was threaded through this land from day one. Back in 1982, he and a couple of partners stumped up $10,000 for the $110,000 property, borrowing that enormous shortfall at 20% interest. He had a newborn and a job pumping out a major chunk of Australia’s output as chief white winemaker at Hardys. And there were no vines here yet. It was a leap of faith, and that faith would be sorely tested when a year’s work preparing the vineyard went up in smoke in the Ash Wednesday fires of ’83.
In the intervening years, though, that same faith has been repaid a thousand times over. The Lenswood vineyard has become known as one of Australia’s finest white wine sites, and its Sauvignon Blanc has been proclaimed the nation’s best by none other than James Halliday. “It’s just so grand to be there,” the lifelong painter, sports fanatic and nature lover told me a few years back. “It’s beautiful to be engaged in what’s essentially an agricultural, horticultural and artistic pursuit in this glorious countryside.” 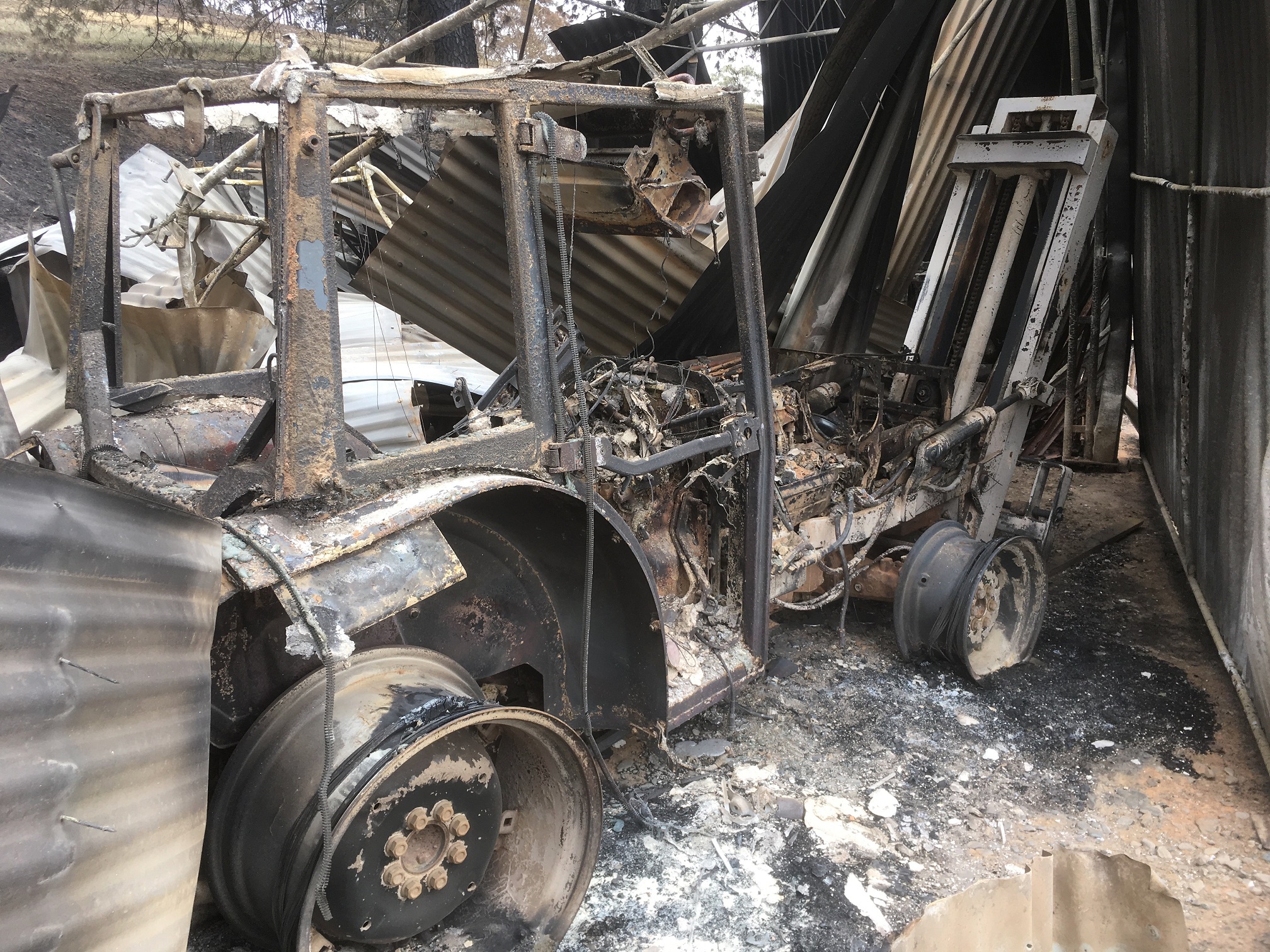 But things were not so grand when Geoff was guarding this patch on what had been decreed a catastrophic fire day by the Country Fire Service (CFS). His Plan A for such days was to patrol the boundary on his John Deere Gator with a water tank and a pump, putting out any spot fires that might flare up. The danger was spawned about 10km north on Hollands Creek Road, and the morning winds looked set to send it eastwards. Geoff and a neighbour kept watch as the fire got bigger and closer but not dramatically so. By 10:30am it was about two kilometres away.
Then the wind picked up and the fires severity spiralled as it ripped through steep forested country. “All of a sudden this CFS truck roars up behind us and says, ‘How do we get to that?’ and he points behind us,” Geoff recalls. “Just 500 metres away is this plume of smoke and flame and it’s on our southern boundary.”
A helicopter flew in and scooped water from Geoff’s dam to splash on the blaze. Five times it swooped by, to no avail. “The wind that was a gentle north-westerly had turned into a howling northerly and it was fanning the flames something fierce. They dropped the water but the wind blew it away before it hit the fire.”

Geoff had the presence of mind to open the gate at the northern end of the vineyard to give the CFS emergency access. “The whole of the eastern hill was aflame and the cloud of smoke was so dark and the wind was really howling.” Spot fires were popping up all over the place, mercifully petering out in the close-cropped grass.
With the smoke swirling and flames closing in, Geoff knew it was time to enact Plan B: Save himself. “I took refuge down by the dam and it was an apocalyptic scene. I went into the cabin at one stage to see if I could do some good to put out the singeable timbers, and it was so dark that the night security lights had come on. It was bloody dark and hot and windy, and it was no good.”
The sheds and cabin went up. The fire was so hot that the bull bar and the wheels of his Toyota Prado melted. The Gator and his tractor were reduced to a metal shell. Everything inside the toolbox in the tractor was pulverised.
Geoff was fortunate the fire didn’t take hold in the vineyard. Fifty-odd restraining posts were destroyed and 30% of the vines had their leaves scorched to a crisp by the heat, but with careful pruning they should be back in action for the harvest of 2021. The rest of the vineyard was left intact. The cool climate of the Adelaide Hills is something of a saving grace; it’s early yet in the grapes’ growth cycle, limiting the impact of smoke and heat. The vines went through flowering only recently, with berries currently about peppercorn size. Geoff expects the grapes to go through véraison at the very end of January, with picking envisaged around the third or fourth week of March.

While he was granted clemency on the fruit front, he was unspared in the realm of art. Geoff’s recently cleared out his study at home in Adelaide to make room for the newborn baby of son Edward and partner Haidee. Geoff’s paintings – about 90 of them, dating back to the ‘70s – were being stored in one of the Lenswood sheds. Each one of them perished. “It’s most of my life’s work,” he said. “It’s heartbreaking, but that’s life and you get on with it. It’ll give me renewed impetus to do some more painting. And of course the ones given away and sold are still in existence, and that gives me great comfort.”
Once again, that Weaver optimism. But then again, others lost far more than him. The fires have taken countless lives and homes across Australia. Once rescued by the CFS, he had time to reflect on the perils facing neighbours and the firefighters themselves as they drove to the safety of Woodside. “They were picking up people from burning houses and going in to try to save property at the same time. That’s a hairy job. You’re driving down roads with trees burning on either side and trees falling across the road, going into tight roadways to try to save houses without any easy through access; you’ve got to back out, you’ve got to find a place to turn. If a tree comes down, you’re stuck.”
The Hills is a tight community and Geoff knows they’ll all work together to fix things up. “Even though we’ve lost a lot, we’ll just battle on and get over it. That’s the deal.”
I tell him, even so, that it must have been horrifying to look on helplessly as he came close to losing the hallowed haven that is his Lenswood vineyard. And his response reminds me how a certain breed of patient, devoted, resolute Australian farmers regards their role. “You don’t ever lose it,” he shoots back. “You lose control over it for a while, and then you gradually regain it as you pull it back together. The land goes on.”

The Adelaide Hills Wine Region has set up a Fire Appeal and is accepting donations to help affected growers and fund immediate recovery efforts, t. Those who’d like to make a cash donation should please visit the official GoFundMe page.